Jesus Montero has been demoted to AAA, and Jesus Sucre has been selected to take his place on the roster.

Share All sharing options for: Jesus Montero Demoted to AAA

Typically the axe falls on off days, and after this road trip's debacle moves were inevitable. Jesus Montero has been nothing short of terrible, posting a .261 wOBA while only showing marginal improvements at the plate this month. On Monday I discussed his disastrous Saturday performance in which he made two major mental errors - one on the basepaths, and one defensive gaffe on the final play of the game.

Ryan Divish has announced this morning that Montero has been optioned to AAA, and Jesus Sucre has been recalled to take his place. Sucre is Zunino's backup in AAA and can't really hit, but is an good defensive catcher who will hold a place on the roster while Shoppach takes over as the every day catcher. Shoppach had already begun to take away significant chunks of Montero's playing time over the past month, and will now be given the reins full time.

The team has yet to announce a corresponding 40 man roster move, as Sucre needs to be added to the roster. Likely casualties include Francisco Martinez and Vinnie Catricala. I'll update this post when the move is announced.

Montero being sent down to AAA instead of AA signifies that the organization is, at the very least, taking a break from his development as a catcher, if not giving up on it. He's not going to steal playing time behind the plate from Zunino, as the organization also promoted Brandon Bantz from AA to back up Zunino. Montero's now the 3rd catcher on a team that has a clear developmental starter and simply won't get work behind the plate.

It's unclear what the Mariners plan to do with Montero in AAA besides teach him how to hit. The majority of his playing time will come at DH, though perhaps the organization will attempt to teach him how to play first base. People of the internet, hop on that MiLB.tv subscription to make gifs of Montero chasing down pop foul balls over his shoulder! 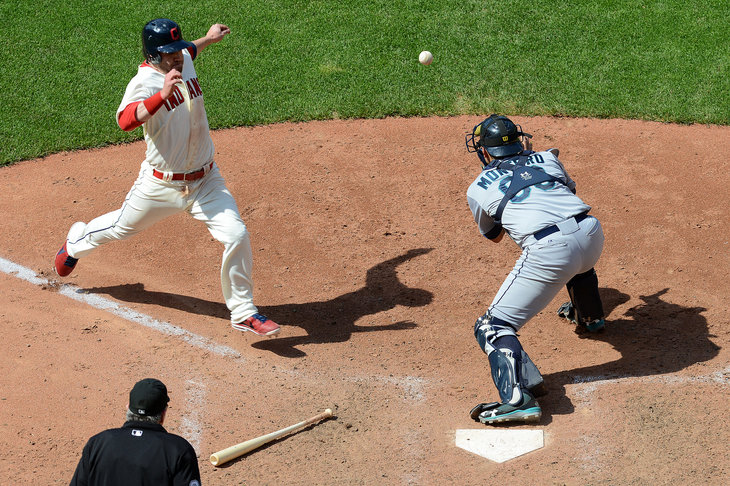 Jesus Montero continues to make fundamental mistakes on the field.

Montero may be down in AAA for quite some time. The Mariners already seem perfectly content to let Shoppach handle regular catching duties, and there's no reason to bring Montero back up until he starts to hit at a lower level. The burden of improvement is now on Montero, and for the first time since he's been a Mariner, he'll have to prove that he belongs. The mental part of Montero's game has always been in question and he's shown time after time his head wasn't where it needed to be during a game - maybe this is a wake-up call that will force him to realize his career won't be handed to him anymore. There were suggestions that Montero was bored in AAA when he was a member of the Yankee organization. I doubt he'll be bored this time around, fighting to save his career.

Jesus Montero's future has suddenly become very simple. If he doesn't hit, he's done. It's no longer about footwork, pitch framing, or positioning. It's not about the comical baserunning. He's going down to Tacoma to learn how to hit, and if he can't do that, he won't be back any time soon. Montero is too talented to give up on, but he needs to put in serious work to turn his career around.

This may not be the only move the Mariners make today, so stay tuned.

Update: Shannon Drayer reports that Montero will be playing DH and 1B in Tacoma, and Baker adds that catching will be in an emergency capacity only.