Jesus Montero continues to make fundamental mistakes on the field, and Saturday's game was a prime example.

Share All sharing options for: Jesus Montero and Fundamental Mistakes

One of the most infuriating things as a fan is when you watch a player day after day make mistakes that can be avoided. Mistakes that, with basic mental preparation, should never happen. When Raul Ibanez doesn't get to a ball in left field and boots it, it isn't about a lack of effort or that his head wasn't in the game, he's simply not talented enough as a defender to make that play.

The things Jesus Montero does behind the plate don't fall under that definition. I'll choose my words carefully, because it would be presumptuous (and ill-advised) to insinuate that Montero is lazy or anything like that. I don't know a single thing about Jesus Montero as a person. I don't know how he has received his instruction, I don't know what his preperation method is. What I do know is that major, avoidable, fundamental mistakes continue to happen.

One thing I will presume is that Jesus Montero, "catcher" by trade, has been taught the correct way to position himself at home when there's a play at the plate. When you are setting up to get a force out at home, you place your right foot on the plate, so that your glove can extend out as far away from the plate as possible to receive the throw before the runner steps on home. Below are several examples of how this has been done by other catchers around the league. 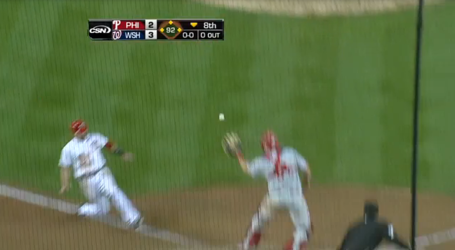 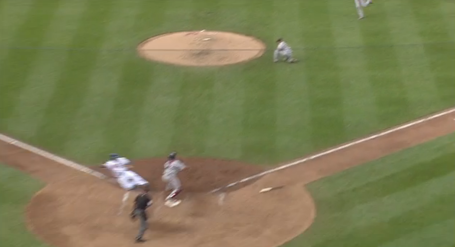 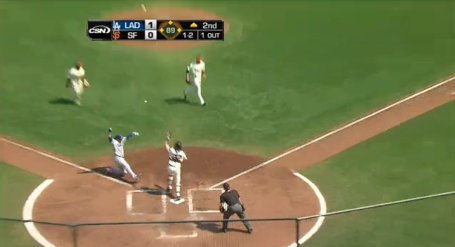 This is how Jesus Montero decided to field Brendan Ryan's fantastic attempt at saving the game on Saturday. 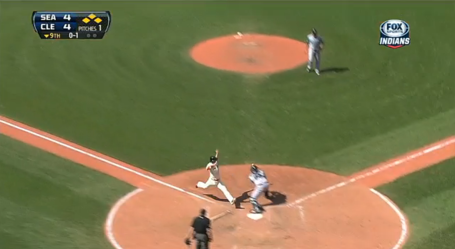 Left foot planted firmly on home plate, as if he's about to rotate and block the plate from a slide. Glove side towards the plate, not the field.

It's not to say that if Montero was positioned correctly, he makes the play. And the Mariners most likely still would have lost, even if that play becomes an out. But it's an avoidable mistake, and an inexcusable mental error. If Montero has his right foot on the plate, he can stretch further and his glove is closer to the play. Montero couldn't keep his left foot on the bag, but the throw seemed to beat the runner.

I refuse to believe Montero hasn't been instructed the right way to position himself for a play like this. On the other hand, I do believe that Montero probably wasn't thinking about the ways he would need to move before the pitch was thrown, or this wouldn't have happened. This is the same game that Montero got picked off as the lead runner on 2nd base with nobody out. These mistakes keep piling up, and it isn't just behind the plate, although that has gotten the most attention.

Jesus Montero ranks dead last at pitch framing this season. He's thrown out one batter in 24 stolen base attempts. His bat has been terrible, even though it's dragged down by a low BABIP. It's enough on its own to damn his performance. But what really raises an eyebrow are games like Saturday's.

I just don't think Jesus Montero gets it. I don't think he gets that he has to prepare hard, think about every play before it happens, and know what he has to do and what he absolutely cannot do. There's been no progress in that aspect of his game, or any progress in his defense in general. You could even argue there's been regression. I could absolutely be wrong, and wouldn't dare present this opinion as fact. The results speak for themselves either way.

The Future of Jesus Montero 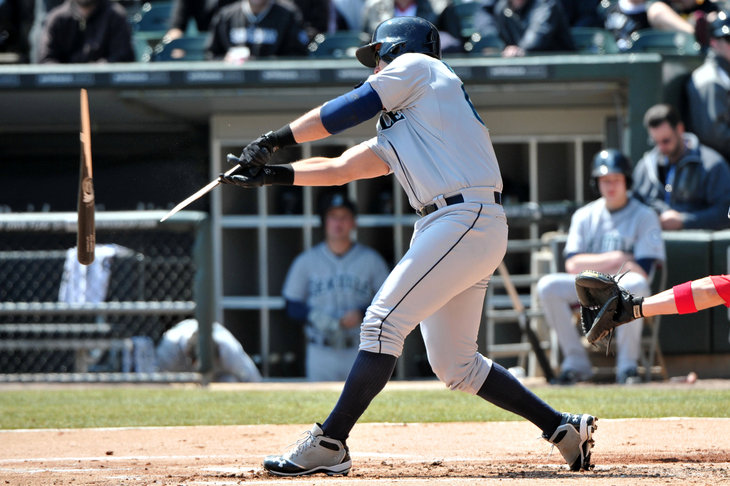 Taking a look at Jesus Montero's struggles and where he fits in this organization in the upcoming months, by Scott Weber

A popular idea is to send Jesus Montero a message, whatever that means, and send him to the minors - but the Mariners really can't afford to do so. Zunino is obviously getting all the time in AAA, and Hicks is the primary guy in AA (though he's really scuffling). To send Montero down would basically be an admission that he's done as a catcher (this is most likely inevitable), and they would have to bring up Jesus Sucre, who's not on the 40 man roster. With Gutierrez and Kinney returning from injury soon, the team is already in a crunch when it comes to sorting things out, but Montero may force their hand.

As the season goes on, it's becoming more likely that Mike Zunino will unseat Montero in a straight swap when the time is right. And when that time comes, we can speculate every single angle as to why Jesus Montero has been such a bust to date in a more detailed and advanced approach. But for today, sometimes it is as simple as focusing on mistakes that can be avoided.