MLB Scores: Mariners Lose a Wild Heartbreaker to the Indians, 10-8

The Mariners tease with big time homers, but lose yet again to Cleveland in heartbreaking fashion.

Share All sharing options for: MLB Scores: Mariners Lose a Wild Heartbreaker to the Indians, 10-8 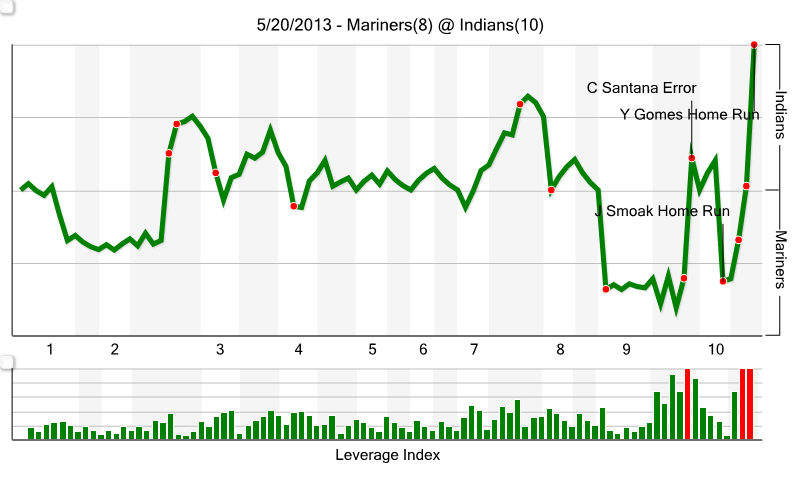 9:05 am games are weird to watch in Seattle. Eating breakfast while watching baseball feels wrong, and yet delightful at the same time. One thing that is never delightful these days is playing baseball in Cleveland, as the Mariners manage once again provide false hope, only to Mariners up the victory. How sad is it that I don't even have to explain or justify the use of "Mariners" as a verb? Or adjective? Or expletive?

Seattle hasn't won a game in Cleveland since 2011, and have lost in spectacular fashion during that time, as five of the last seven losses in Cleveland have been walk-offs. After today, it's now six of the past eight. Is that real? That can't possibly be real, can it? That is so Mariners.

This game had plenty of highs and lows, and was one of the craziest games we'll see all year, but the ending was as predictable as it gets.

The Mariners got off to a nice start early on, snagging a quick 2-0 lead thanks in part to a Kendrys Morales double that he thought he hit out of the park, which he didn't actually hit out of the park, or even close. The ball bounced off the lower part of the left field wall, and the end result was a hilarious big dude who doesn't know how or when to slide situation, as he tap danced his way to 2nd base.

A Morse shot up the middle scored Morales, and the M's were out to a quick lead against Scott Kazmir, and everything was going as planned. Iwakuma settled into a nice groove, and other than a double up the line to Carlos Santana, he had things working for him. He struck out Ryan Raburn to end the 2nd inning, but then he got Laz'd. Iwakuma was denied an obvious strike three, and Raburn promptly bombed a 3 run homer two pitches later. 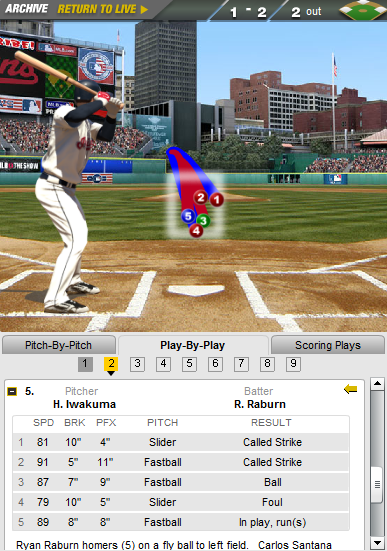 The wheels came off a bit, and Yan Gomes bombed another mistake pitch from Iwakuma to make it 4-2 - fortunately, Scott Kazmir is still Scott Kazmir, and the M's scrambled a few back on 3 straight hits to tie it back up 4-4.

Iwakuma came back out shaky again, and conceded another run to make it 5-4. At this point, it became fairly evident that the Mariners weren't in for their typical 2-0 zipper on a getaway day, and this one could be a messy one. The M's started smacking around Kazmir again in the 4th, and chased him. The M's tied things up, and things cooled down for a bit.

Iwakuma managed to recover and retire 7 straight to get through the 6th inning, but the Mariners were unable to get anything done against Matt Albers and Bryan Shaw.

Yoervis Medina gave the lead back to Cleveland in the 7th by struggling with his control, but managed to limit the damage to 1 run despite a couple loud outs to finish the inning. Seager responded in the top of the 8th by crushing a line drive homer to right, and we were tied once again. This is the exact moment I started to sense the Mariners were going to lose another walk-off game.

In the 9th inning, Wedge decided to pinch hit Endy Chavez for Kelly Shoppach against Chris Perez, and Chavez promptly smacked a meatball into the seats to put the M's up 7-6. Just as he wrote it up. Though I was prepared for for more "saving the closer" snark before the Chavez blast, Tom Wilhelmsen quickly started warming up after the M's got the lead. In the 9th, Wilhelmsen let a couple batters on, and there were runners on the corners with 2 outs and that familiar walk-off feeling came up again with Carlos Santana at the plate. Like bile rising in the throat. Inevitable. Not a matter of if, but when.

Instead, Smoak smothered a hot grounder to first and made the toss to Wilhelmsen covering first for the win...and Wilhelmsen drops the ball.

On to extras. It wasn't for long, as in the 10th, with 2 outs, Justin Smoak absolutely annihilated a ball into the RF bleachers to give the M's the lead back. Wilhelmsen threw 22 pitches in the 9th, so Wedge pulled him.

Furbush came in to replace Wilhemsen to try to close things up and promptly allows a bloop single. Furbush bobbles the ensuing bunt, recovers, tosses it to Smoak, who drops it after Drew Stubbs is initially called out (he was safe), and there are 2 on with nobody out. I think I've read this book before.

Get to the bus. Get out of this city.