The Mariners, in the past, were very un-selective and strikeout-prone. Then they hired Dave Hansen to be the hitting coach. So far, the results are freakin' sweet!

Share All sharing options for: Dave Hansen and Plate Discipline

I'm going to assume that you don't have any idea who Dave Hansen is.

The reason that no one cares about the hitting coach is simple: no one knows about the hitting coach. His exploits are not the stuff of legend. They usually aren't even the stuff of beat reporter tweets. His work is done behind closed doors, and most of it doesn't have a huge effect on a hitter's performance. Brendan Ryan isn't bad at hitting because of where he puts his right foot, he's bad at hitting because he's Brendan Ryan, and in that respect there's only so much a coach can do. What work the hitting coach can do is generally kept secret - the team obviously has a vested interest in not revealing their hitters' weaknesses to the world. So while I'm sure Dave Hansen does very interesting work, and the players are grateful for his presence, and he is considered an important part of the staff... I'd wager that the median Mariners fan neither knows nor cares about him.

Which is a shame, because it seems like he's doing some pretty nifty stuff.

As you know, last year's Mariners were rather strikeout-prone and walk-averse. They ranked 20th in MLB in walks and 8th in strikeouts, which is a rather undesirable combination, and then over the offseason they decided to fix their plate discipline woes by trading John Jaso for Michael Morse. People did not expect this team to be good at taking a strike.

But people's expectations are often confounded. Sometimes a cigar is a dick. Sometimes the Angels sign Josh Hamilton and Albert Pujols only to witness Raul Ibanez post a higher ISO than the two of them combined. And sometimes the Mariners trade away their most disciplined hitter, only to leap from 20th to 10th in the BB% rankings.

How are they doing it? Well, check out the 2013 Mariners' O-Swing%s, juxtaposed with their career O-Swing%s in bar graph form: 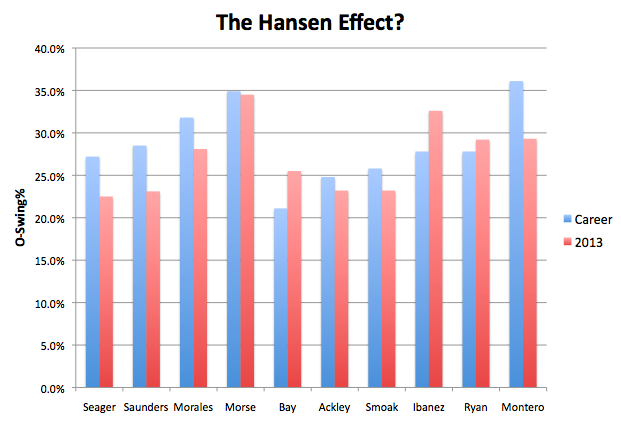 The first thing that immediately leaps out at you is that almost everyone's O-Swing% is significantly down. Now, before you ask me if this is statistically significant, I'd like to point out that the timing of this post is not accidental. Michael Saunders and Jesus Montero both just cleared the 100 PA bar this weekend. Since (as per the research of the fabulous Pizza Cutter) the normal threshold for Swing% significance is 50 PA, and since Montero and Saunders see roughly 50% pitches in the zone and 50% pitches out of the zone, we can roughly estimate that O-Swing% tends to become meaningful right around 100 PA. Which is where all of the Mariners on the chart are now. Hooray for Logan not being really stupid, probably!

The second thing that somewhat less immediately occurs to you is that the five hitters who've seen the biggest proportional drop in O-Swing% - that's Saunders, Montero, Seager, Morales, and Smoak in order - have all seen a significant spike in BB% without a corresponding spike in K%.

Montero is walking at 115% the rate he used to. The other four are walking at more than 130% their old rates, while Seager is all the way above 150%. Of the five, only Seager has seen his strikeout rate increase, and it's not a large increase relative to what his walks have done. In fact, the group as a whole has seen their average K% drop.

The third thing that may possibly make itself evident to you if you stare at the graph for long enough is that the hitters who have NOT seen any improvement are the hitters who a hitting coach would be least likely to work with on plate discipline - specifically, the slumping (and generally beyond saving offensively) Brendan Ryan and the Wise Veterans Raul Ibanez and Jason Bay. This is what initially led me to believe that Hansen might be responsible for the improvement, rather than just a bunch of young hitters tweaking things.

But I didn't want to write an article advising the club to give more money to Dave Hansen without actually knowing whether or not it was Hansen making the difference. Problem is, since I don't have clubhouse access, I have no way of verifying whether or not Hansen's been working with the younger hitters on their plate discipline.

So I did what any reasonable blogger would do, and asked someone who actually knows something! From Ryan Divish's chat on May 10th:

If anyone would know, it would be the beat reporter who gets to spend time with the team, go on road trips with them, and interview them as he chooses. I take this as confirmation that Hansen has been working with several of the Mariners' hitters on improved plate discipline - and I take the numbers as confirmation that it's working.

In retrospect, perhaps this shouldn't have been a big surprise. In his heyday Hansen was a famously disciplined hitter. Around the turn of the century, in fact, he walked over 17.5% of the time in three consecutive seasons. What plate discipline data we do have for him is perhaps a little suspect, since it's BIS data from before PitchF/X was around, but it credits him with a stupid low 15.7% O-Swing%. It's not really all that shocking that he'd convince the Mariners to stop swinging at so much junk, especially considering that the guy he's replacing - Chambliss - walked only 7.6% of the time over his seventeen-year career.

In the final analysis, just as there are three factoids to be drawn from that chart, there are three lessons to be learned from The Tale of Dave Hansen and the Mariners' Plate Discipline.

1) The Mariners are probably going to walk more now. Hooray!

2) It's possible for factors that you don't account for to influence results in ways you don't expect. Suggesting before the season that the Mariners with Michael Morse were going to walk more than the Mariners with John Jaso would've gotten you laughed out of the comments, by a group of Jaso fans that would've included me. And yet here we are. Good analysis takes into account all possible variables, and it turns out (who would've guessed?) that hitting coaches can be an important variable. Don't ignore something just because you don't have a good way to project its influence.

3) The "Eric Wedge encourages the Mariners to hack" meme is officially dead. This is the last nail in its coffin. Not only was that idea spawned by a quote seized right out of context, it is directly contradicted by the Mariners' hiring of Dave Hansen. If Eric Wedge is such a swing enthusiast, why would he bring on a hitting coach who's telling all of the hitters to swing less? He wouldn't. Don't take out-of-context quotes and use them to deride others' viewpoints. That is the way of someone who is both deliberately obtuse and an asshole. An ignoranus, if you will.

In conclusion: Dave Hansen will probably not get a raise, because

However, he has probably earned one. When Hansen is eventually fired, as all hitting coaches must be, I hope that you will join me in shedding a single tear. Farewell, sweet Dave. You will be missed.