MLB Scores: Maurer Solid, But Indians Walk Off On Mariners

On May 17th, 2013, the Seattle Mariners lost to the Cleveland Indians on a walkoff home run at Jacobs Field. Raise your hand if you saw it coming.

Share All sharing options for: MLB Scores: Maurer Solid, But Indians Walk Off On Mariners

You ever wake up in the morning and know exactly what’s going to happen to you the whole rest of the day? Let me tell you: it’s goddamn creepy. The first time it happened to me, I couldn’t get out of bed for half an hour. It was like having a bucket of raw information dumped into my brain – the flood of data, the sheer sensory overload just shut my system down. I couldn’t move. Or, maybe, I knew I wasn’t going to move until exactly 7:23 and 36 seconds, when the cat decided my face looked comfortable. One of those things.

That first day, I was too shocked to actually use any of it. Here: imagine you woke up one day with wings. You wouldn’t jump out of bed and take off right away, right? First you’d freak out, and then you’d freak out some more, and then you’d try to pretend like they weren’t there, but it wouldn’t work. And then, maybe, you’d get kinda curious, do a few flaps, work your way up to it until finally you’re skipping around town like the world’s heaviest zebra bird.

So I went in to work like always, only a little bit late because of the whole head exploding thing. I saw it coming – the spilled coffee, I mean, not the psychic crap – but I couldn’t do anything about it. Too bad. I liked that blouse. Anyways, by the time the quarterly got done, I was freaking the fuck out. At first it just seemed like the same old, same old routine: broken printer, lost USB key, asshole in the cubicle next to me making fun of my Mariners mousepad... but by the time I got to the Q&A bit of the presentation, and I knew the As before they asked the Qs, I had a feeling something was up. Or, rather, I knew something was up.

So I asked my boss for rest of the day off. She said sure, congratulated me on the great presentation, and looked impressed when I said I'd done it doped up on Nyquil. Told me to take care. I went home and called up my boyfriend - asked him if he'd believe me if I told him something weird. He said sure. I told him. He didn't believe me. But he came over after work anyways, because we'd already scheduled a date for that night (takeout dinner and the Mariners on TV, God help us). The food was crap, but the company made up for it. Plus, the M's flattened New York 12-2, and the look on his face when Seager hit the home run and he realized I'd called the final score perfectly? There's something you don't see every day.

The next morning when I woke up I didn't have it. It's weird like that - not every day, not always the whole day. My boyfriend laughed at me when I told him: "Miss One-Shot Psychic, wasting her shot on the Mariners". But then it was back the day after, and he shut up pretty quick when I told him exactly which puddle he'd slip in on the way to work. Being psychic has its advantages.

That third day was the day I figured out I could change stuff. If I saw a future I didn't like, usually one that involved the asshat one cubicle over talking to me, I could figure out the steps that had led up to it and then do things differently. Just like that, my work day became about sixty times more pleasant. Feeling pretty good about myself, that night I called up my friend Miranda and told her to come over to my house. I had a cool new trick to show her. She consented.

When I flipped on MLB.TV, she sighed. "This better be good," she said. I practically rubbed my hands together with glee. Then I pulled out a pen and an index card, and wrote down some key facts about the game: number of Maurer strikeouts, final score, number of Ibanez hits, the works. She scoffed. "Seriously? You're going to show me how good you are at sports betting? Jen, you know I don't like baseball, just like I know you don't like soccer. Don't try to convert me."

No no, I assured her. This was going to be good.

I guess it wasn't that good, because after three innings and a beer Miranda was getting bored. "Tell you what," she said. "If you're so good at betting, let's make a bet so I don't fall asleep watching this stupid game. I'll do an index card too. If my predictions are more specific than yours, and they're all right, I win ten bucks. If not, you win five. Deal?" Easy money. I took the bet - though I confess I felt a little bit guilty.

So the bottom of the tenth rolled around with a lefty out there on the mound and the two of us now severely smashed on the couch. Luetge tossed the slider, Kipnis yanked it into the right field bleachers, the crowd went wild, et cetera. I looked at Miranda. She looked back. I smirked. I flipped my card: perfect 3/3. Nailed the score, Maurer's K count, and Ibanez's hits.

She flipped her card.

Tie game after nine innings. Indians walk-off home run in extras, off of a lefty reliever after a walk. Home run hit by someone unexpected, barely over the right field wall. Awkward dance party at home plate.

Miranda just laughed. "Shit, Jen. You don't exactly have to be psychic to predict a Mariners-Indians game in Cleveland." 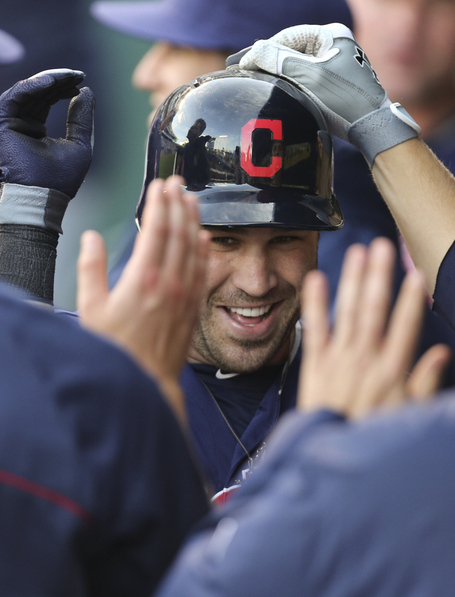 So. Cleveland again tomorrow. (Or today, by the time this is published.) Anyone want to take a guess as to the outcome?