Now that the red haze has drained from the vision of most fans, it's time to take stock. How have the Eric Wedges of yesteryear fared? Will we still see a new manager before long?

May is a wonderful time. It's a time for occasional sunbreaks, tulips, the summer blockbuster season, standardized testing in public schools, scraping the rust off the grill, and watching Mariners games that don't feel like the opposite of taking a shower. But while the act of remaining true to the blue no longer feels like an impossibly slow seppuku, the reality is that the new Mediocre Flavor Mariner Brand Baseball is essentially unchanged from the rat poison of April. The youth remain in revolt, talent-wise, and none of the veterans are revealing themselves to be Bret Boone reincarnate. Sooner or later, things will have to change.

It's never fun to be that guy, the one who roots actively against his or her own ballclub for the sake of the ballclub. One starts to make bargains with one's self, draws out a calculus of present versus future wins, weaves storm metaphors, talks about Stephen Strasburg too much. Whether or not you privately cheer against the livelihood of grown men and their families is a personal choice, and you and each of us must claim mastery over our own souls. This is not, however, the matter at hand.

The matter at hand is to present some raw data in the form of blue rectangles, and make some wildly unsubstantiated guesses based on them.

A cursory glance at the Mariners roster and the number of Joe Saunderses on it will indicate that Eric Wedge is not the difference between the current team and glory. But while a change (or a culmination) of front office philosophy is the catalyst this fanbase needs, we can also think of the Skipper as the canary in our metaphorical coal mine. Just as Eric Wedge is a rational human being, so is Jack Zduriencik, and casting off coaching ballast is a time-honored tradition of sinking general managers.

With that in mind, let's look at some numbers. For the purpose of this study, I've collected the firings of every baseball managers since the year 2000. This includes managers who were "released from their obligations" to take jobs with other clubs, or were traded; the original team didn't want them anymore. It does not include interim managers, emergency stopgaps, voluntary retirements, or untimely deaths. (There have been no untimely deaths.) Why only go back to the year 2000, one might ask, when there is so much more data? Because I'm only a man.

In total, 81 managers have been released in the past twelve-plus years. Of them basically half (41) were fired mid-season. The Mariners stand at 18-21, on pace for the exact same record (75-87, .463) the accumulated last season. How does that compare to our fallen heroes? 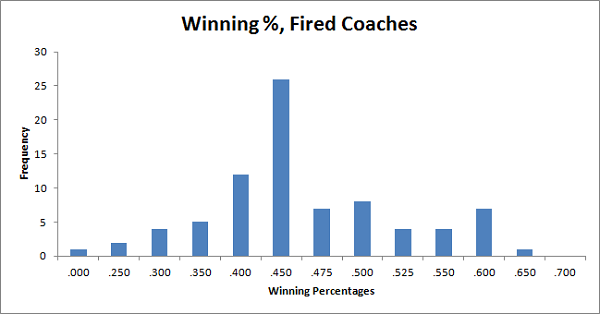 It compares quite well, as a matter of fact. More managers were fired with records between .450 and .475 than any other bin, which isn't particularly surprising considering more teams finish near .500 than truly tank. (That poor outlier on the right end is Art Howe, deemed (correctly) disposable by Billy Beane during the height of the Moneyball era.) But this is for all firings. What about firings that take place midseason? 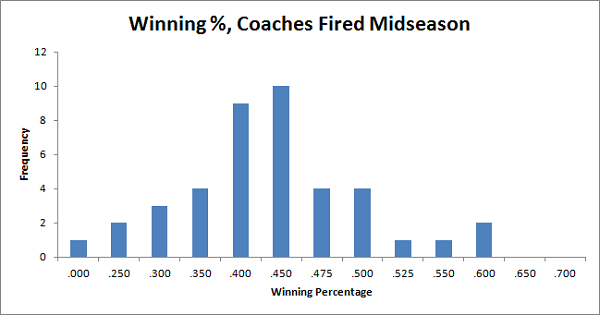 Not much change. Slow-starting teams are more likely to press the panic button, which also shouldn't be too surprising, considering how itchy we all felt at the end of April.

Nor is there much warning as to when the manager hears the call: 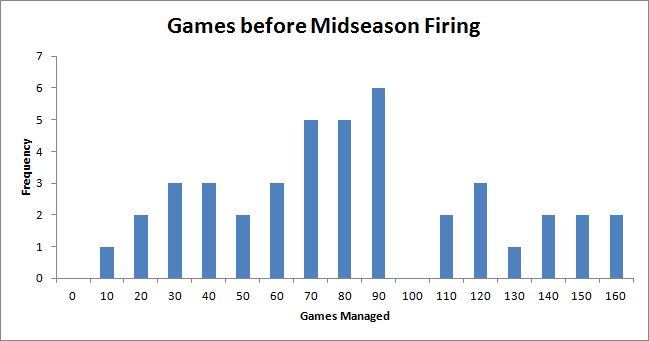 Fun outliers here include Phil Garner, who was fired from the Tigers after just six games in 2002, and Larry Bowa, who was fired with two games left on the schedule in 2004.

My guess, though I haven't yet had enough time to research this, is that during a season on the hot streak, the timing of their release coincides with a string of bad coin flips, and with it an abnormally long losing streak. Certainly the two managers who were fired midseason with the best records, 2008 Ned Yost and 2001 Jimy Williams, were desperation moves in the heat of a dwindling pennant race. In the case of Yost, the move barely worked; the team finished 7-5 and held onto the Wild Card spot, only to lose in the first round. With Williams, who was "losing his players," the team responded by going 17-26 the rest of the way.

Playoff chances seem to have little to do with getting fired midseason. With the usual exception of team politics (see Riggleman, Jim), coaches get fired whenever people can't stand to see their dumb faces anymore. One gets the sense of how close Eric Wedge may have already come.

But wait, the doves cry. It's only Wedge's third season. Whither loyalty? Whither consistency? Hasn't the team's record improved each year since he arrived? To that I say: more histograms! 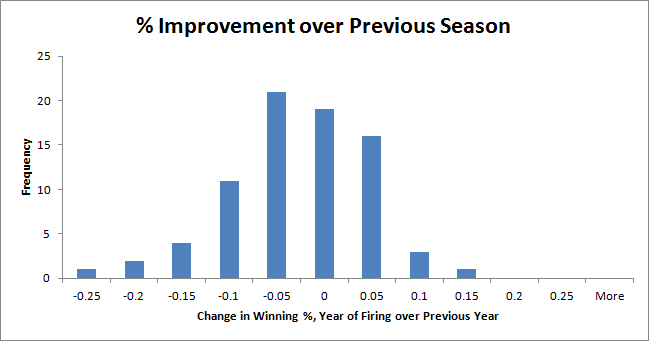 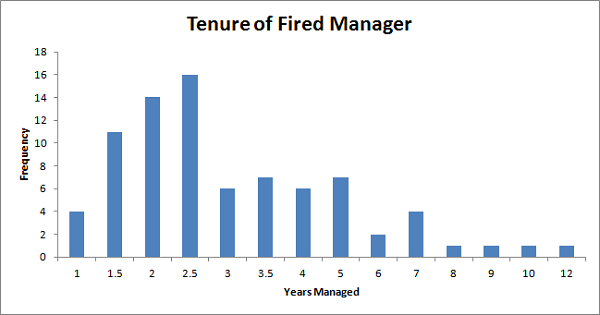 Wedge, it need not be said, has been managing the team for a little under 2.5 years.

So what can we take away from this? Nothing, as always. Using past events to predict the future is always useless. That's why there's a fifth season of Community coming, and that's why you should stuff all the money in your mattress that you haven't invested in bitcoins. But if Dustin Ackley, Jesus Montero and that other guy continue to play the way they have been, the data seems to tell us that not even a surprise winning season will guarantee a fourth edition of Eric Wedge, Manager of Our Hearts.