Life, friends, is not fair. We know this. It's an inevitable and inescapable reality of daily life. No good deed goes unpunished, plans fall through, things fall apart. It's all very depressing. And so we watch baseball. Baseball has rules, and boundaries, and clearly defined terms that put events into easy to understand buckets. Right or wrong. Fair or foul. Ball or strike. Baseball isn't life. Baseball is fair.

Except it isn't, not really. We put humans in charge of enforcing these rules and boundaries and clearly defined terms, and humans are stupid and full of hubris and generally ineffective when it comes to most things. Jerry Layne is one such human. Jerry Layne probably did his best tonight and Jerry Lane's best was inadequate. It seems to be the year of bashing umpires, which would be unseemly if it weren't so justified, and tonight's game didn't help matters one bit. The interference malarkey in the fourth inning seems opaque enough that I'll leave it be, but the called ball four in the bottom of the seventh was crystal clear bullshit. It's way too simple to reduce an entire baseball game to one single pitch, but it feels good so watch me do it anyway. The sixth pitch Charlie Furbush threw to Brett Gardner in the bottom of the seventh inning was a strike. The count was full at that point and Gardner should have been called out but he was not. The pitch was a breaking ball thrown from a funky left-handed arm slot towards a funky left-handed batter that looked inside at first but then tailed towards the center of the plate, and so it's almost understandable how the umpire may have missed it until you realize that he's a professional and that he's no doubt experienced the exact same situation countless times in his long and ascendent career as judge of thrown baseballs. Gardner would later score on a Robinson Cano double and the Yankees would make good use of their extra out, using it to plate the go-ahead run on a sacrifice fly. The inning could and probably would have gone any different number of ways had Gardner rightfully been called out, but we're only left with what did happen and the simple depressing math of Gardner's unearned involvement.

This recap was supposed to go differently. It was supposed to be about Felix Hernandez and his continued dominance against the Yankees in their home stadium. But there was a weird collision at first base that seemed to give Felix pause, and later a ground ball fielded and thrown to second that left him shaking his leg in discomfort. The post game explanation of why Felix was pulled after six innings and 97 was a stiff back. Wedge didn't want to take any chances and despite my disappointment, I can't say I blame him. Up to that point, Felix had masterfully pitched around weirdness all game. In the third, a strikeout on a wild pitch lead to a throwing error by Kelly Shoppach and the lead-off runner on second. The runner advanced to third on a ground out and Brett Gardner came to the plate. Given the situation, Felix was obviously pitching for a strikeout, and Garnder, he of the 90% career contract rate, is no easy batter to strikeout. He went down looking anyway. Robinson Cano followed, swinging through strike three and Felix cleanly exited a jam he had little hand in creating.

In the fourth inning, after that strange bit of interference, with two runners on, Felix responded once again with two consecutive strikeouts to end the inning. His final line was 6 innings, 5 hits, 1 run, 2 walks, and 8 Ks. This recap was supposed to go differently. 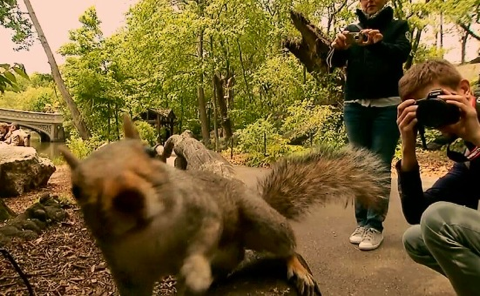