The Mariners are back in Seattle for a quick three game homestand against the Oakland A's before heading back east once again.

The Athletics rebounded from back to back losses against the Mariners to start the season by rattling off nine consecutive wins. The magic ran out, however, and they have gone just 9-15 since the streak ended. Meanwhile, the Mariners have rallied from a rough start and are now in a position to overtake the depleted A's for second place in the division.

Our Q&A this time around is with Alan Torres of Athletics Nation.

Jon: The A's beat the Baltimore Orioles in 10 innings on April 28th before getting national attention for their 19 inning victory against the Los Angeles Angels the very next night. What effect did playing 29 innings over two games have on the club in the days to follow?

Alan: Just on the surface, it looked like a heavy price to pay: Brett Anderson, Coco Crisp, and Chris Young all ended up on the disabled list in the days following those 29 innings.

On the other hand, Brett Anderson was already battling a nagging ankle sprain, and was scheduled to skip a start anyway. Combined with a potential thumb issue suffered weeks earlier in his start against Houston, many felt it would be better to DL him now and get him completely healthy. His prior couple starts had been pretty bad, and thats simply not who he is when he is healthy, which of course is always the operative question with him.

Coco Crisp is seemingly always a hamstring injury away from the DL already. Chris Young's injury was somewhat unexpected, and I think this one hurt the most. He was expected to be the depth guy in case of a Crisp injury, and had already served that role when Cespedes was out with a hand injury earlier. That said, Cespedes is a capable CF, and having a Smith-Cespedes-Reddick outfield is still major league quality. So, overall, it hurts a little, but if there is any AL team built to sustain injuries, it's the A's.

Jon: John Jaso appears to be off to a good-not-great start with the A's following a breakout 2012 season in Seattle. A little over a month into his A's career, what do you like and dislike about his game? 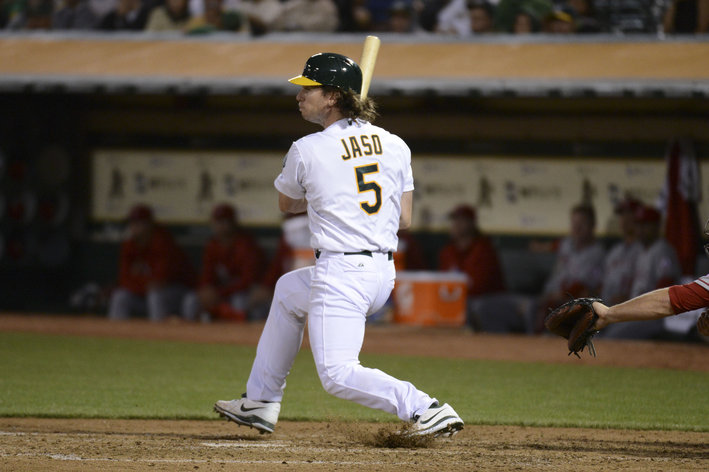 Alan: Not that it should have been surprising, but Jaso is simply not a good receiver. I do not believe I have seen a solid throw to a base yet, and he is "noisy" behind the plate, in that he doesn't stay still enough to adequately frame pitches. At the plate on the offensive side, he has brought the patience but not the power. Only 5 XBH so far, and even his patience seems to have suffered slightly: PITCHf/x plate discipline data suggests that he is swinging at more pitches outside the zone, and fewer inside the zone. That's slightly concerning, but considering the production the A's didn't have last year out of the C spot, there's not much to complain about. At least with the injuries right now, he is DHing more often with the A's having called up minor league journeyman Luke Montz to take Chris Young's place when he went down.

Jon: 24-year-old Dan Straily appears to be off to a good start (ERA be damned) this year following a great 2012 season split between AA, AAA and the bigs. How good can be be? What's capping his upside?

Alan: You've really asked one of the $64,000 questions in the A's community. He went from someone only a few of the heartiest prospect mavens were talking about, to the talk of minor league baseball and on the cusp of an MLB starting spot within a year. As you said, ERA be damned, but something he has appeared to have trouble with overall is HRs: he's allowed 13 of them in 56 MLB innings thus far. Now, many a young pitcher has scuffled at the beginning of his MLB career, and for now, that's what this can be chalked up too. That said, he also has a problem with keeping the ball down, which has led to these struggles. His stuff isn't explosive (50 fastball, 60 slider) so he needs to learn to keep both of those down in the zone. That good-but-not-great stuff and overall command issues thus far are limiting him. Assuming those issues are rectified, he tops out as a #2 starter but more likely a mid-rotation guy. Think Tommy Milone, but right-handed and a little more velocity. 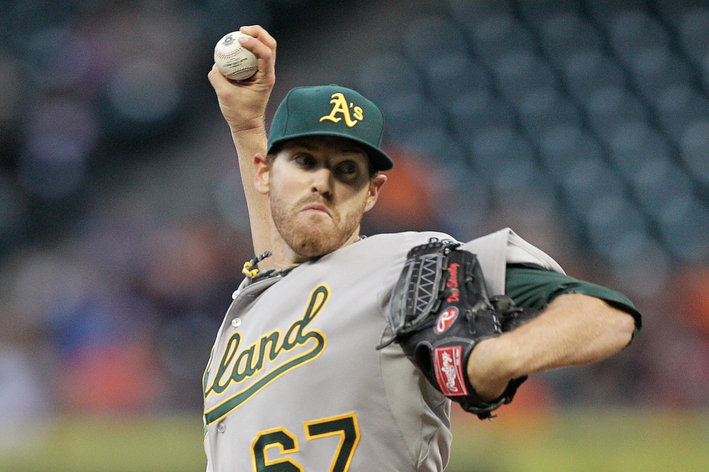