Win Expectancy Chart, courtesy of Fangraphs, for the Orioles at Mariners game on May 1, 2013. 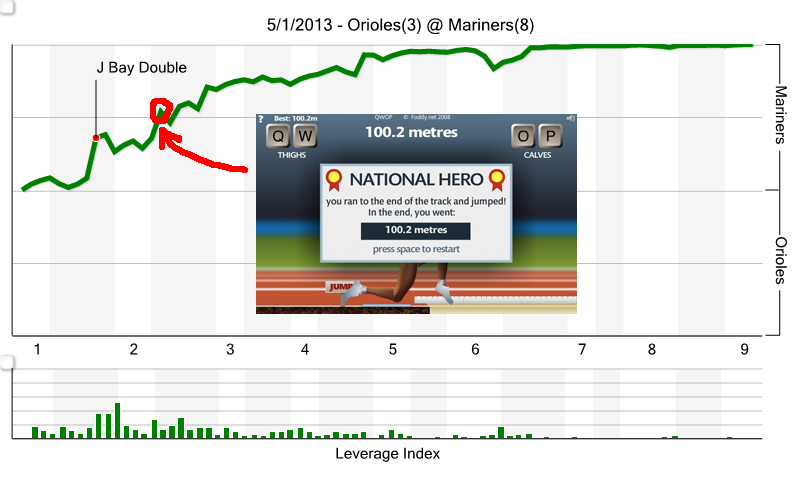 Look, I know I said I'd never do the pictures in the game charts, but I needed you guys to know exactly where on the chart the triple was and also SWEET BABY JESUS MONTERO HIT A TRIPLE. Thanks to user Crystal for DH for coming up with the joke that I shamelessly stole from the game thread.

This is normally the part where I would talk about the game, but Jesus Montero hit a triple, so my brain is too fried for me to actually think about anything that went on. Here's a GIF. Just look at it. Looooook at it.

1) What went through your head when Montero hit the triple? Unfortunately I was away from my computer when it happened, but here are the thoughts of our very own GIFmaster Stephen Cheatum, preserved from a chat:

(Thought it had a chance to be a home run, was disappointed it was not, then realized what was happening)

2) You may have noticed that we're trying to discuss things that aren't just the game in the game threads these days. What did you think of today's Game Thread? Did you like it, or was it too LLLJ for your tastes?

3) Are you surprised by the end-of-month Player of the Game leaderboards? (I went by WPA in games without a poll. Ties were broken by fWAR.)