Apologies to the hard-working Seattle Mariners beat who just need a few good quotes to fill out their newspaper gamers, but this was the moment Erik Bedard became one of my favorite Mariners.

Fans in this sector of the Internet resented him because he cost the Mariners Adam Jones, but other fans disliked him because he was portrayed as salty and uncaring by frustrated reporters. Was he a jerk? Maybe. I'm not in a position to say. But as his Mariner career progressed I began reading his quotes imagining self-awareness and a dry, dark sense of humor deployed at his own expense. And I liked that. 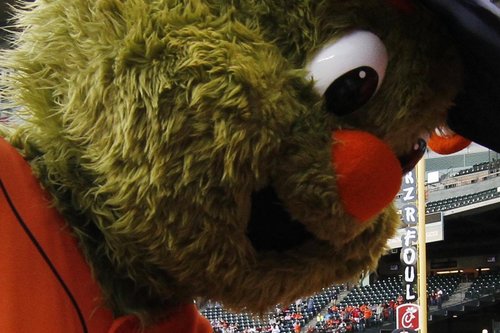 He was also one of my favorite pitchers to watch. For someone who was often accused of not caring he took a bulldog mentality to the mound. He didn't scream and pound his chest like Felix Hernandez but he did buckle down and flash subtle hints of extreme competitiveness, at least to my eyes. He pitched hurt, and like so many of the greats was able to grind out acceptable starts when his good stuff or command were clearly missing.

Bedard left Seattle as one of my all-time favorites and I always wished other fans would appreciate him like I did, whether that appreciation was warranted. It's with that in mind that I'm very excited to see him at Safeco Field again, his first appearance since July 29, 2011.

Brandon Maurer takes the hill for the home team. Maurer struggled to locate in his debut against the Oakland Athletics, but had his moments.

The Houston Astros can be expected to issue similar swings in this one. Hopefully this will be a confidence builder for the rookie.