Baseball teams win less of their home games than those of any other major sport. Is this desirable, and if not, how can we change it?

Share All sharing options for: Should Home Field Advantage Be More Advantageous?

Confession: I have never been to a Seattle Sounders game. I've never even watched a Seattle Sounders game. I know soccer exists, because sometimes I read Twitter at seven o'clock in the morning. But although I personally am unwilling and unable to devote myself to another sport, there's no way to deny the energy and empathy that go into attending a match. Soccer fandom, especially in person, is its own animal.

Every sport contains a different form of energy in its crowd. Football crowds are focused, channeling their collective will upon the visiting quarterback as he attempts to call out audibles. Basketball and hockey crowds are more evenly frenzied and raucous, matching the continuous, frenetic action on the court. Baseball, of course, is more relaxed, more spacious, more conservative in its outbursts. But should we be content with this? 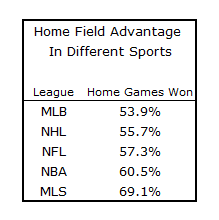 Dave Cameron wrote an essay a couple years ago about the causes and effects of home field advantage, and numerous studies have been made on the phenomenon. A few details are clear: travel is probably not a major factor, because home winning percentage has stayed constant over baseball's long history, despite technological advances. The sheer quantity of people in the stadium doesn't seem to correlate, either, based on the fact that good teams and poor teams alike share the advantage. There are some studies that even claim that the home field advantage exists without any audience at all. 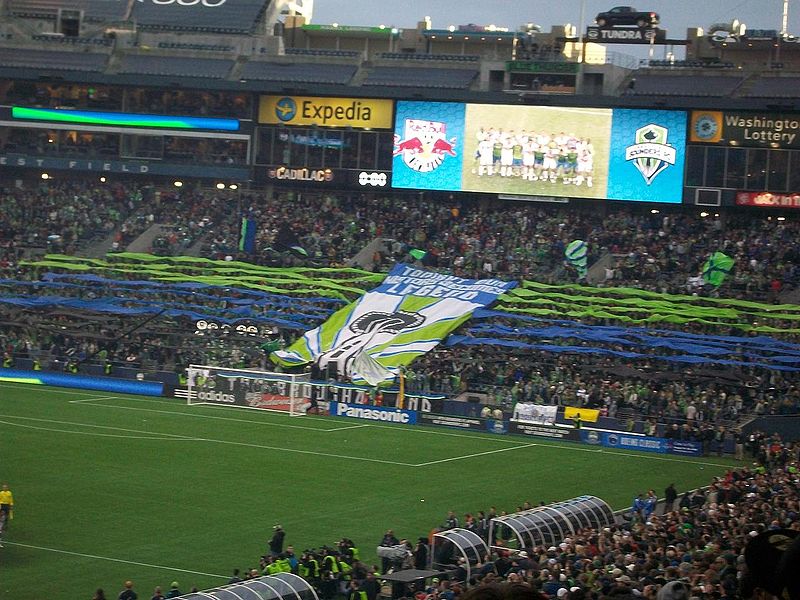 Some sports confer some slight advantage to the home team based on the rules: hockey allows the home team last substitution, for example, allowing them the opportunity to create favorable matchups. Baseball allows the home team to bat last, giving them an advantage in hitting with the knowledge of how many runs are necessary to win in late situations. This, however, is offset by the visiting team being guaranteed to employ its best reliever in the highest leverage situation, while the home team must always use its closer in a tie situation, given extra innings. There are a few other minor benefits: home teams tend to hit more triples, because visiting outfielders don't know how a ball will ricochet of the walls in the corners, for example.

All of this is trifling, according to the experts. Instead, as Tobias Moskowitz and L. Jon Wertheim uncovered in their book <u>Scorecasting</u>, home field advantage is due almost entirely to the unconscious effects of the home crowd on the calls of referees and umpires. For whatever reason, when there's a gamechanging call against the home team, 3the men in black are more likely to swallow their whistles. 3Thus sports like soccer and basketball receive the greatest advantage, because these are the sports where the referee has the most dramatic impact on the outcome of the game. (Outliers, such as Jim Joyce, naturally still exist.)

I'm not going to attempt to dissect or refute these studies in this piece; the men and women who conducted them are far more intelligent than I. Instead, I'll restrict myself to a simple and open-ended topic: is home field advantage a desirable thing? And if so, how can we enhance it?

Cameron's theory is that winning home games creates excitement and provides a more pleasant baseball-viewing experience for the fanbase, and I agree with this. It's hard to imagine how home field advantage, regardless of how great or small it is, is unfair as long as each team has an identical number of home games. No one complains, for instance, in the 60-40 split seen in the NFL; the great teams, we're told, have to battle through such adversity.

And adversity is where I see the appeal of the home field advantage: the galvanization that it creates in a team's fans, a bond that makes them feel necessary and valuable. Having a 12th man applied to Safeco Field seems like nothing but a good thing, for fans and for baseball both. In a rapidly homogenizing American culture, where Walmarts and McDonalds are identical everywhere, sports franchises offer one of the few remaining sources of local nationalism, a sense of civic pride and identity. The shared experience of rooting for a single team, and having that rooting have some perceived effect on the game (even if it is, in reality, only perception), is worth cultivating.

(I should also include here, parenthetically, one more rational argument for increased home field advantage: it would add extra weight to the pennant. It's already difficult enough to watch a five-month, 162 game season end in a single playoff or in four quick evenings. Increased home field advantage, obviously detached from the All-Star game, would make April and May more meaningful, and less a crapshoot for those teams who qualify for a postseason berth.)

If you're unsold as to the value of home field by now, feel free to skip down to the comment section and deride me for mocking the tradition of the game. Otherwise, I'll continue by exploring what could be done to improve the home team's chances. As Cameron noted, we're probably not comfortable with the concept of uneven umpiring, even if that unfairness is completely unintentional. However, after a hundred years, that phenomenon doesn't seem as though it's going to go away unless we hire the robot umps, an entirely different discussion altogether. So we're left with two avenues for change: environmental (changes in fan influence, meant to intimidate foes/umps and encourage heroes) and structural (rule changes).

Of course, every marketing department in existence is seeking to optimize fan influence, in so much as a more dedicated fan base is a paying fan base. And some of these strategies have worked better than others. The King's Court has been a clever and successful attempt to inject some ferociousness, some self-awareness into a section of the crowd. Baseball fandom is already in essence about being part of a greater whole; if so, donning the yellow T-shirt is about being a part of that part. But as fun as the feeling is, those annoying studies tell us that no amount of passion will show up in the standings by itself. 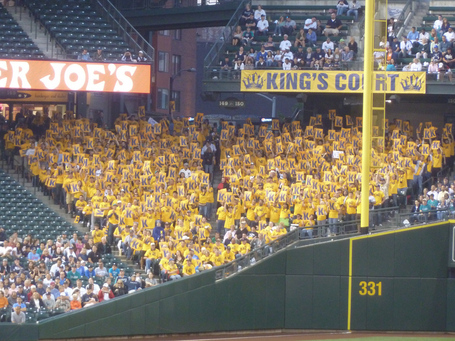 No, structural changes are probably the most effective and fairest ways to improve the home team's chances of winning. Not that they were always fair; Bill Veeck famously told of attempts to waterlog the infield around home plate when facing good bunting teams, and even moving the fences in between half-innings. But it would be easy enough to modify the rules to give one team a slight upper hand: allow a twenty-sixth roster spot or a free substitution to give one team a deeper bench, perhaps, or make the foul pole foul for the visiting team. If these seem too artificial, a more direct, and probably equally unwise option, would be to allow fans to affect the ball while in play. It wouldn't be difficult for statisticians to find an exact set of rule changes that would lead to the exact win probability the league wanted to create.

Will any of this happen? No. And the mere suggestion of altering a rule has surely clouded some men's vision in a red haze. But the clumsiness of my alternatives shouldn't impugn the idea itself, which is that home field advantage is something worth pursuing. Perhaps someone will conjure up a perfect compromise in the comments, or perhaps the forces of time and tide will create the outcome naturally, by mastering the idiosyncracies of each ballpark and adapting rosters to fit them in a way that teams have totally failed with outlier parks like Coors, Safeco and Petco to this point.

But here's hoping. Because an emotional, territorial crowd, one that actually joined in the battle against the visiting team, would only make baseball more absorbing.