There has been a running gag the past couple years based on the Houston Astros' growing obscurity. Name five players on the Astors active roster. It was continually amusing because it was unbelievable that a top level team in a major city could fill out a lineup card with so many players no one had ever heard of.

Six things to know about the Astros after six games 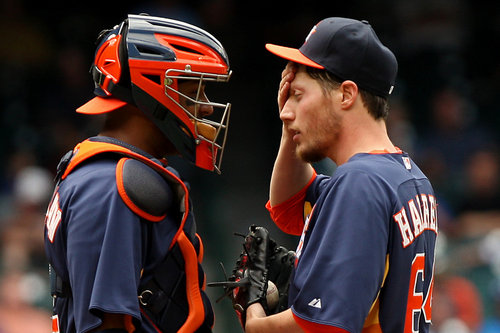 I could rattle off a few more names this season than in years past, partly because the team has beefed up their name value with some veterans like Carlos Pena and Erik Bedard and partly because I've been making an effort to pay more attention since it was announced that they'd be joining the American League West. Still, I don't feel like I have much of a grasp on what the Houston Astros are and I suspect many of you feel the same. David Coleman of Crawfish Boxes has graciously agreed to help get us up to speed before his Astros invade Safeco Field for the Mariners' home opener.

Jon: How is the Astros fan base reacting to the league change? Are they excited, upset, ambivalent or something else entirely?

David: Most of the reaction to the league change happened when it was first announced. Back then, people were very upset and blamed anyone in contact with the shift. That included commissioner Bud Selig and new Astros owner Jim Crane.

The consensus seems to be that fans miss the NL, but that adding a designated hitter hasn't been humanity's greatest evil. Most fans seem to enjoy not seeing a pitcher hit in that first series with the Rangers, but I think there has been some loss of fan base because of the move.

The problem is that the fan base has been dwindling for lots of issues outside of the league switch, so it's hard to tell how much it has mattered.

Jon: Traditionalist symbol and former-GM Ed Wade left the Astros in disrepair from top to bottom, leaving his successor with a 56-win big league team and a farm system consistently ranked as one of the worst in baseball. The more progressive-minded Jeff Luhnow wasn't able to add to the win column in 2012, but what are some of the things he's changed that show that the organization is on the right track?

Jeff Luhnow has used limited resources to inject fresh talent into the organization.

David: Weirdly, Wade started the rebuilding process more than tore things down. It was Houston GM Tim Purpura, who took over in 2005, that hurt the team most. He traded away valuable prospects for guys like Jason Jennings and failed to sign anyone before the fifth round in the 2007 draft.

Wade made some bad free agent signings like Pedro Feliz, Mike Hampton and Russ Ortiz, but he did provide three of Houston's biggest prospects in the Hunter Pence trade, netting Jonathan Singleton and Jarred Cosart. Both players may be contributing to the major league team by the end of the season.

What Jeff Luhnow did was speed up the rebuilding process Wade began. Wade may have traded off the most valuable parts of the roster, but Luhnow was able to spin off much less valuable players for a lot more minor league depth. None of the prospects Luhnow picked up last summer are going to be on the level of Singleton or Cosart, but the sheer volume of pitching he added should lead to at least a few big league contributors.

Luhnow also had a high impact draft, using the new bonus rules to pick up multiple pieces that could contribute in the future. Wade and then-scouting director Bobby Heck had good drafts, but Luhnow's first has the potential to be great.

Jon: The Astros traded their most valuable player (by 2012 fWAR) in Jed Lowrie for Chris Carter and prospects. Did you like the move from the Astros' perspective?

David: Jed Lowrie has an impact bat at a position where those are scarce. He played shortstop decently before he was injured in 2012 and should have been the best position player in Houston's lineup this season. So, it was painful to lose him.

However, Lowrie was an older player who probably wouldn't be an Astro by the time Houston is ready to contend. By flipping him for a big-time power guy like Carter, another interesting arm in Peacock and another catching prospect in Stassi, Luhnow increased his odds of finding another impact player. Maybe Lowrie could have stayed healthy and been that guy this season, but Carter and Peacock have a greater chance of doing that in the next couple.

Jon: Which players are Astros fans pinning their hopes on? Who, if anyone, should the team be building around?

Matt Dominguez was acquired in the Carlos Lee trade.

David: Most of Houston's future hopes are tied up in the minors. Guys like Singleton, 2012 No. 1 overall pick Carlos Correa and top prospect George Springer have caught the attention of Houston fans, but they're still at least a year away from making an impact in the majors.

That leaves some of the younger players on this roster. The biggest one is second baseman Jose Altuve. The diminutive middle infielder has a great hit tool and improving defense. He may be the most popular player on this team and is young enough to be around when Houston is good again. Another guy in that situation is Matt Dominguez, who could be a Gold Glove third baseman if he hits enough to stick in the majors. He's also young enough to stay around for a while.