The Chicago White Sox trounced the Seattle Mariners in 2012, beating them eight out of nine times, outscoring them 55-38, and perfecto-ing them with a pitcher who owns a career tERA of 4.93. The Mariners needed 12 innings to secure their only victory.

It's a new season and hopefully it's a new Blake Beavan. The Mariners gave Brandon Maurer the fourth spot in the rotation so that he wouldn't have to make his MLB debut with the added pressure of pitching in the hitter's wet dream that is White Sox' home park. They may have made the right call based on Maurer's results in Oakland, but coddling their rookie left them with a poor matchup to kick off the series as Beavan is an extreme flyball pitcher who averaged a home run per game on the road last season. 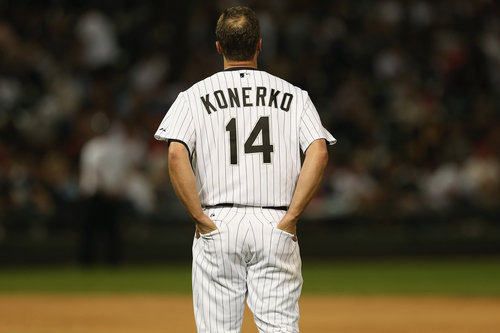 Q&A with South Side Sox's Jim Margalus - by Jon Shields

There was some talk about Beavan altering his release point in Spring Training, raising it to provide more downward plane on his pitches. The hope is that this will help him keep the ball on the ground a little more often and, in general terms, give the hitters a tougher time. What effect this has on his groundball-to-flyball ratio and ability to get swinging strikes remains to be seen, though . U.S. Cellular Field is a hellvua place to try and find out.

The Mariners face second-year southpaw Jose Quintana, who got off to a great start last season by limiting walks and home runs, but slipped in both categories as he trudged into the dog days. He doesn't (or didn't) have a great changeup and ran a notable platoon split in his rookie season, so Eric Wedge's righty-stacking could play well. Quintana relies on a cutter to get opposite-handed hitters out.