In which the author tries to convince himself that Brendan Ryan can't be this bad with the bat.

Now, I could say worst offensive player on the team, but that's probably going to get duked out by Robert Andino and Ryan now that Munenori Kawasaki is gone, and here's hoping it's a barn burner to the finish. But the entire premise of this post dates back to the end of last season when I started looking at just why in the hell Brendan Ryan found it so completely impossible to hit the ball in a vicinity where someone wasn't just standing. It's not that I want to write the week's most uninteresting and slightly depressing post, it's that I have a question that screams for an answer.

So let's take a quick step back for context.

Ryan is 31, but he only became a real every day kind of player at 27 in 2009 when he posted a .292/.340/.400 line -- very clearly the best offensive season in his career. What I've always found interesting about that season is it bore a rather striking resemblance to the kind of hitter he was in the minors. Throughout seven minor league seasons in the St. Louis Cardinals system, Ryan averaged a .292/.340/.382 line over nearly 1700 plate appearances. Yes, that's buoyed by his low-A experiences, but it wasn't as if Ryan was always tabbed as a great-glove-no-bat type. There might not have been much in the way of expectations for his offense, but then again, nobody really expects you to hit .194 either.

Did something come unhinged in 2012? Let's weigh in with hit trajectory since 2009:

So 2012 was a tale of a few more fly balls, an ongoing drop in ground ball rate, but a (dare I say unsustainably high) spike in infield fly ball rate. About that IFFB%. At 26%, it's the highest in five years in all of baseball. It's barely worse than Mark Ellis' mark of 25.1% in 2008, who then went on to post an IFFB% rate of 11.6%. There aren't many people other than Eric Byrnes who you can rely on an uncanny ability to pop the ball up to the infield a quarter of the time. This, for Ryan anyway, strikes me as something that's likely to remedy itself based on good old fashioned dumb luck.

So let's say his IFFB % mellows at a career level 15.7%, which is actually still pretty awful, but whatever -- it's not 26%. If you want to get really nerdy about batted ball rates, IFFB% rates stabilize at a .70 correlation coefficient after 650 plate appearances (and Ryan had only 470 in 2012). The correlation at 300 plate appearances is .610, which isn't nothing, but it isn't necessarily ironclad. Ryan is roughly in between from last season, which might not say anything other than the fact that we should just lean on the stronger predictor, which would be his career rate over 2300 plate appearances. So 15.7% it is. Why is this important? Well, hits are important. An infield fly ball is almost never a hit.

Which leads me to his batted ball profile.

So Brendan Ryan hit basically 20% line drives, 41% ground balls and 39% fly balls in 2012. It was a partial departure from what made him successful in 2009, but whatever. That's what he did. Here's what bothers me: 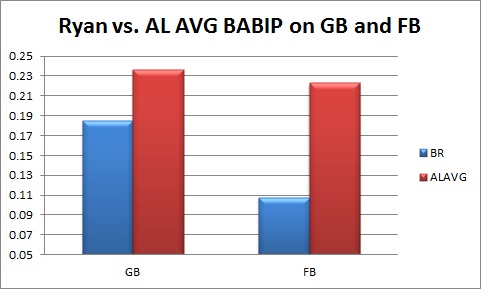 Against the American League average, Brendan Ryan appears to have gotten a particularly raw deal on ground balls and fly balls relative to batting average on balls in play. The AL league-wide average for BABIP on ground balls was .237. Ryan's was .185. On fly balls, the AL average was .127 and Ryan's was .089. Even his line drives were below league average by about .010, but at least it was close. But the point is, for roughly 80% of the balls Ryan hit, he at least seemed to be incredibly unlucky or every time he hit the ball, it was to a defensive wizard. Shifts can impact BABIP, but yeah. Who shifts on Brendan Ryan.

Ryan's off season is complete with the feel good story of the elder brother who coached him since tee-ball re-tooling his swing to be more simple. Eliminate stuff. Go up the middle. Great.

Here's the part of the story where I include a gif of his swing this season versus a swing from last season, but shocker of all shockers, MLB.com doesn't have any highlights of a Brendan Ryan hit from 2013 and I'm still just too irritated about their blackout policies to spring for the MLB.tv. So you'll just have to trust that his swing is re-tooled. And then I guess you trust that it being re-tooled is good.

The focus of this Mariner offense has been mostly on improvements from Jesus Montero, Justin Smoak and Dustin Ackley. On the "big bats" of Kendrys Morales and Mike Morse. And yeah, that's all real important. But when you're in the league with the Designated Hitter and your shortstop looks like Tim Hudson at the dish, well, that's a problem.

If the Mariners are going to compete, Brendan Ryan's bat needs to start looking like his career slash-line, which isn't asking for much. But if his defense stays at his expected level, the difference between his 2012 bat and his career bat is about 1.5 wins. And that's not insignificant.

Regress to your own mean, Brendan. The Mariners need you.