Putting content on YouTube is a big step for MLB, but they still have a long ways to go

Major League Baseball's partnership with YouTube offers some interesting content—like a number of full games—but the league still trails far behind the NBA with social video.

I'm Colin O'Keefe, long-time Lookout Landing reader and delusional M's fan. I write about sports and social media at Past The Press Box.

Unlike the NBA, Major League Baseball is looking to make as much money as it currently can off its current product. The NBA demonstrated again this week—though to the dismay of about everyone around here—that they do, or at least seem to, care about passionate fans. Major League Baseball, on the other hand, would rather make as much money off the fans it currently has. This attitude carries over to the world of online video, and it's why the recently-announced partnership between the MLB and YouTube leaves much to be desired.

Here are the details of the partnership, from GigaOM:

Major League Baseball is now streaming two games per day live on YouTube, for free – but most of our readers likely won’t be able to tune in: MLB’s live streams will be restricted to users outside of the US, Canada, South Korea, Taiwan and Japan.

However, the league will also add highlight clips from in-season games two days after they air on TV, and those highlights will be available to everyone. Also available on MLB’s revamped YouTube channel: Thousands of archive clips from MLB.com’s "Baseball’s Best Moments."

So, what exactly does this change? Well, not too much. You can now watch highlights on a different platform—that is, if you'd rather watch them two days later than on MLB.com. Oh, and there's also the "Baseball's Best Moments" clips, which are also already available on MLB.com. The only interesting part of this is the complete games. The MLB At-Bat app already hosted close to 65 full classic games, but the MLB Classics Youtube channel brings the total to 204 archived full games, and I'd expect that to grow with time. First, some bad news: A lot of the titles are in Japanese. Good news: it's because there's a slew of random multi-hit games from Ichiro.

So while the complete games are cool, though some of them were already available, it doesn't change all that much. Major League Baseball is only looking to capitalize further on the content they already have by uploading it to a new platform. Full games aside, the only way this helps fans is if you normally go straight to YouTube to search for content, as opposed to Google. YouTube is, after all, the world's #2 search engine, so it's an opportunity for baseball to improve its revenue by generating more clicks through a popular platform.

But ultimately, this still leaves baseball well behind the NBA on social video.

Why? MLB Advanced Media, as far as I can tell, will continue to be as strict as it possibly can be with the league's video content. I've scanned every article I can find on the partnership, and nothing hints towards MLBAM being more lenient towards fan-uploaded content. YouTube's Google+ post (heh) on the partnership mentions "tens of thousands of hours of archived games dating back to 1952," and that's all well and good, but it's absurd I can't find anything that isn't fan-shot video or a photo slideshow set to cheesy music when I search for "Brad Lidge Pujols home run," "Endy Chavez NLCS catch" or any other notable MLB video plucked from the archives.

The NBA, on the other hand, isn't so quick with the takedown notices. Just yesterday morning I was quick to jump on Reddit's NBA section to find highlights of what I'd heard on Twitter was Stephen Curry's coming out party as a superstar. As I expected, there was video of Steph Curry's third-quarter takeover. That video's already been pushed down by highlights of Carlos Delfino's dunk over Kevin Durant, the final play in that close Thunder-Rockets game and a number of other fan-uploaded videos. Now search Youtube for "Brandon Moss walkoff Angels 19th inning." You won't find the play.

By not actively seeking these videos out and pulling them down the NBA has created an environment in which their videos are much more widely available and much more widely shared across social networks. In doing so, the NBA is allowing the discussion of the game to foster organically and is growing the sport's popularity through its fans. Can you imagine if Blake Griffin's rookie season took place in an environment comparable to the one with the MLB's takedown-estoppel? I'm not saying YouTube alone made Blake Griffin a superstar so quickly, but it helped.

And while the numerous fan-created highlights and the social environment the NBA has fostered absolutely build goodwill for the sport, there's another side to the NBA's success with video online. There's an analytical side that, if it existed in baseball, would push the sport's already-thriving SABR community further into the mainstream.

To my understanding, teams own all of their digital properties in the NBA. This includes video. In Major League Baseball, it's all controlled by MLB Advanced Media. It's the reason why every MLB team has the exact same website while, in the NBA, teams are free to create environments that work best for them. It's great for some things, like the MLB At-Bat App, but for others it's hugely detrimental.

Mariners new TV deal gives added flexibility, but will they use it? 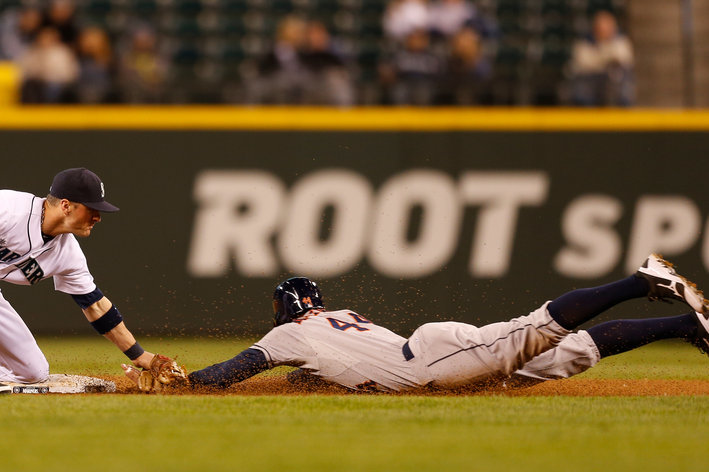 The Mariners get a new lucrative TV deal before the bubble bursts. The question is, with no debt, how will they use it? - by Maury Brown

In the NBA, teams are allowed to create their own video partnerships. One of those partnerships—one every single team has made—is with the outstanding Synergy Sports Technology. Synergy's greatest feature is that it "Cuts and catalogs every possession of every game logged." And it's the cataloguing that makes the service so invaluable. On demand, the platform can quickly pull up the last 150 times LeBron James was double-teamed on the block, or the last 25 Stephen Curry transition three-point attempts. It puts a powerful amount of information at teams' fingertips and, the amazing thing is, it's widely available to fans as well.

The service has greatly advanced the level of basketball analysis being done by fans and writers. In basketabll, where there aren't metrics available for defense, writers can instead clearly illustrate how Kobe Bryant and Dwight Howard are terrible off the ball this year. Entire publications have been built around this service, including Jared Dubin's Hoop Chalk and, before that, Sebastian Pruiti's NBA Playbook, which was shut down when he was hired to the OKC Thunder's video team due to his outstanding analysis. Just a week ago, SB Nation's Mike Prada was able to create posts around every playoff team's "pet play."

Now, imagine this in baseball.

In 2010, Derek Jeter won the American League Gold Glove for shortstop. In 2010! Wouldn't it have been helpful if, while we were considering who would win it (not sure someone would've even considered Jeter, but go with me), someone had been able to show readers every single out-of-zone ball Jeter made a play on. Or, specific to Mariners analysis, wouldn't it be nice if we could show a video tracking every slider Brandon Maurer threw in his first two starts and contrasting it against every slider thrown in his second two? I love spreadsheets and tables as much as the next person (total lie), but the advanced analysis produced by writers here and elsewhere would be more approachable and impactful if it included video.

Right now, we're a long, long way from ever seeing that. Major League Baseball is clinging hard to its content, striking up partnerships where the primary beneficiary is the league. And even if it were to create a service like Synergy and make it available to fans, don't expect MLBAM to allow fans to upload it to third-party sites. Hell, they barely allow embeddable video of their own player now.

And that's what's so puzzling: why would you ever want people to talk less about your product, in any industry? The NBA is always thinking socially, incentivizing—or at the very least, allowing—online conversation to take place around their league. In baseball, it seems to happen despite what the league is doing. It's the very reason you'll see a number of SBN basketball bloggers credentialed and sitting on press row at NBA games, while it rarely happens in baseball.

Baseball is a beautiful game—the best game. Major League Baseball would be better off if it cared about what made more people think the same.