Please excuse the late and abbreviated recap. I had some connectivity issues keeping me from getting a decent stream late last night when I went to watch the game, so I had to try and fit it in this morning before work. I managed to get through six innings before switching to the condensed version.

When the Seattle Mariners announced a starting lineup that featured an outfield of Raul Ibanez, Michael Saunders and Michael Morse, faces found palms, heads hit desks and the jabs started flying. Oh, the horror! But some of the more reasonable among us noted that with Hisashi Iwakuma on the hill, this was as good a game as any to get Ibanez's bat into the lineup at the expense of defense. Iwakuma led the entire Mariner pitching staff in ground balls last season, keeping a little over half of his batted balls allowed on the ground.

It worked out. Iwakuma only threw 38.5% grounders in his first start of the 2013 season, but aside from his first out of the game (a nice running grab by Morse), the only balls he allowed to make it to the outfield were of the can of corn variety, mostly to center fielder Saunders.

But while some of us feared that Iwakuma would suffer at the hands of the defense, the silver lining was that a great gif might come out of it. We were not denied:

Wedge earned some goodwill by rearranging his defense following Iwakuma's exit, moving back to his Opening Day outfield.

Aside from his leisurely pace, Iwakuma is a fun one to watch. He mixes pitches like a junkballer but also has a legitimate out pitch in his splitter. Here's how you keep hitters off balance: 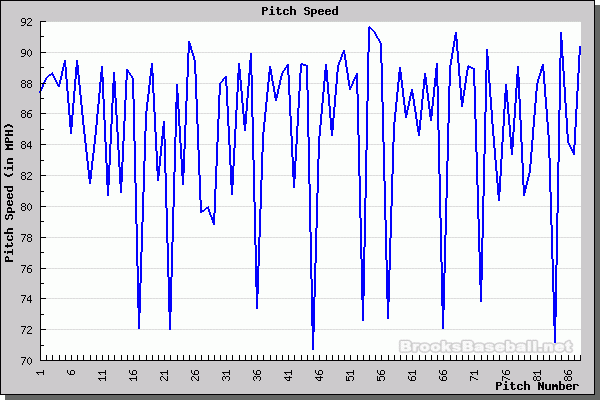 Iwakuma was brilliant Tuesday evening, allowing just two hits and a run. The run and one of the hits came on an absolute missile over the center field wall from Yoenis Cespedes.

Iwakuma tallied 14 swinging strikes, his second highest total to date, most coming on splitters and elevated fastballs. He struck out 7, walked no one, and generally allowed only very weak contact. In the preview I wrote about Iwakuma needing to prove that his rotation time last season was repeatable. This was a great first step. This was a game from a number-two starter.

The other big news from this one was that Michael Morse did what he does best, blasting two home runs. The first came in the third inning with two on and two out. He got an outside fastball and drove it just over the fence in right field. The second, a solo shot in the 9th, was crushed to dead center to the tune of 446 feet, the second longest homer of the young season.

What else did you see in this one? Help me fill in the gaps in the comments. 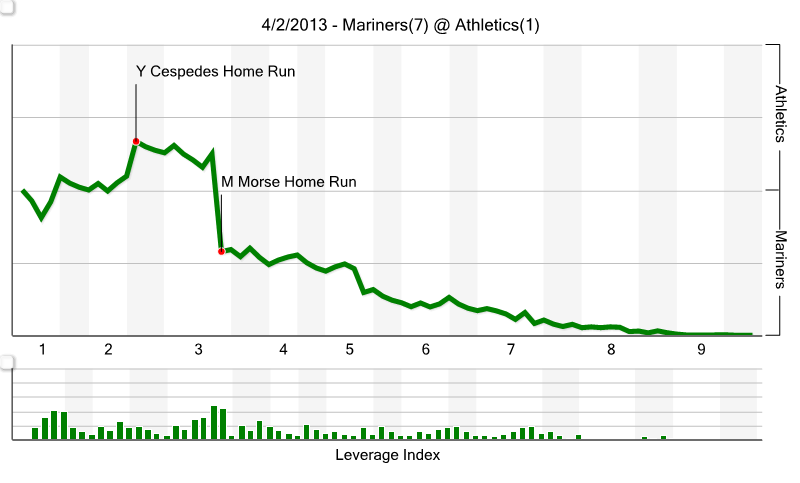