The Seattle Mariners rode performances from Felix Hernandez and Hisashi Iwakuma to a series win against the Los Angeles Angels, leaping them in the American League West standings. Now they send the back of the rotation against a Baltimore Orioles club that has kept the 2012 magic rolling with a 15-10 to kick of 2013.

Eat More Esskay hops over from Camden Chat to give us the lowdown on some of the O's most important contributors.

Jon: Manny Machado played three games against the Mariners in 2012, but at a point in the season when many were disengaged. Provide an introduction to the lauded 20-year-old infielder.

The best shortstop prospect in the minor leagues became, in a bold decision by Dan Duquette, a key contributor to last year's surprising Orioles stretch run as the third baseman. Common wisdom is that shortstop is a more valuable position than third base and that the Orioles may not be maximizing Machado's value by keeping him at third, but as you see in plays like the above, he's just so good there that it isn't even fair at all. He's learning the position on the fly and still has the skills and instincts to be worthy of every bit of praise he gets and more. Machado makes dazzling play after dazzling play and makes them all look routine.

As a hitter, he thus far lacks the flair of his pre-drinking age contemporaries like Mike Trout and Bryce Harper. He sported a sub-.300 OBP in his action last season, showing good power but also occasionally looking overmatched. His slash line so far this season (.277/.324/.436) represents a modest improvement, and watching him every day, you can see the phenomenal talent that is there. As he develops, he figures to improve his pitch recognition, plate discipline, and power stroke. He's already a good player, and Orioles fans have reason to believe that the best is yet to come.

Jon: Expectations for Matt Wieters were so incredibly high ("Joe Mauer with power," etc.) that almost anything from him would have been disappointing. After failing to live up to the hype right out of the gate, Wieters has been able to develop himself into a very good player while remaining somewhat under the national radar. How do Orioles fans view Wieters? Do you see him making another significant leap towards that potential at this point in his career? 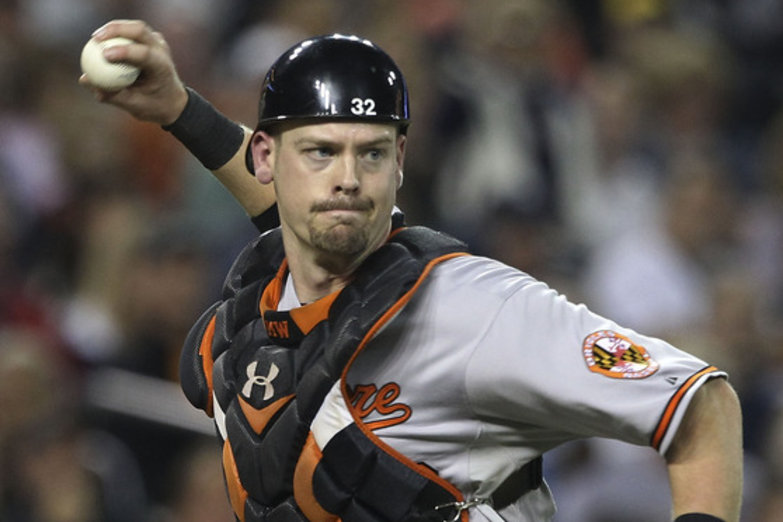 You noted the hype, and it was hard not to buy into all of that. As if the destiny of Wieters was to be one of the game's greatest hitters while preventing every wild pitch, never allowing a passed ball, and throwing out every runner who dares to stray too far from the bag. He's deserving of that defensive reputation, with two Gold Gloves to his credit that are no embarrassment to the award. Last year, he threw out 39% of base runners and nearly 100% of the ones when there wasn't a bone-headed young pitcher failing to hold a runner. This year, he's thrown out 67% of would-be base stealers. The surprising thing about that 8-12 success rate isn't that it's so high but that people have decided to test his arm 12 times already.

There's that Wieters, and then there's the Wieters who grabs a bat and steps up to the dish. Every year out of the last several has been the year where Orioles fans have thought, this will be the year where Wieters takes a leap forward at the plate and solidifies his place as one of the game's superstar players. He had a .778 OPS in 2011, which is his career high, and a .764 last year, when one lone weirdo with a BBWAA MVP ballot tossed him a 7th-place mention. He will be 27 next month, so the likelihood is that is his ceiling as an offensive player after all, and that's fine. He is a slightly above-average player offensively and a great player defensively. He's an important player to the Orioles, but it's about time for me to give up on him turning into a .300/.400/.500 hitter.

One thing to pay attention to with Wieters is that, as a switch-hitter, he's been simply terrible as a lefty batter so far this year. In 60 PA as a lefty, he's mustered this: .173/.254/.288. There's a gap of about 100 OPS for his career platoon splits and lefty has always been his weaker side, but this is ridiculous. He's currently got an .837 OPS as a righty this year in half as many PA. This year, as a lefty, he looks like he can only hit a baseball by dumb luck. It's a problem if he doesn't turn that around to closer to his career levels.

Jon: Adam Jones re-opened some old wounds for Mariner fans by breaking out to the tune of 32 homers and 4.4 WAR last season. Now 27, how great do you think Jones can be become?

EME: If you'd asked me before the season started about Jones, I would have said that last year is as good as he gets, and that if Orioles fans are lucky, he'll be near that good again for the next several years. Of course, if you'd asked me before LAST season, I would have said, trade Jones, he'll never be what we hope for. Then he hit 32 home runs and the Orioles made the playoffs. Life is weird. I still think it's most likely that last year was his ceiling. His OPS improvement through 24 games looks to be largely fueled by an eye-popping .419 BABIP (career mark of .319), and his strikeout rate is a little higher than before. But I've also seen several times where he lived up to that hitting cliche of not trying to do too much with a pitch, serving an outside pitch into right field for a hit.

Teams have to respect Jones' power, as evidenced by the line drive home run he crushed to deep center in Oakland on Saturday. There are holes to be found. Maybe he's just gotten lucky and will fall back to Earth. It's just enough to tease a fan to hope, which could then be dashed.

Jones still has his moments of frustration for fans: an inability to lay off the down and away pitch leads to a lot of swinging strikeouts, and this season, he's made at least three awful plays in center field where he misjudged a routine ball, dropped it, and let runners score instead of end an inning. He won his Gold Glove with a great year at the plate. Sometimes it just looks like he needs to play deeper, and he doesn't, and Orioles coaches have never made him do so.