Whom Should Michael Saunders Replace?

Michael Saunders is coming back to the Mariners today. This is wonderful news. The question is, who should he replace? The answer is, not the guy he probably will.

Share All sharing options for: Whom Should Michael Saunders Replace?

The worst outfield of all time, by fWAR, belonged to the 1979 Oakland Athletics*. That unit combined for an unheard of -61.0 UZR with only a paltry 80 wRC+ to back it up, thus putting up a combined -5.9 fWAR and edging out the 1955 Pirates for "most embarrassing outfield ever" honors. Luckily for Oakland, that was Rickey Henderson's rookie year, and Henderson would go on to captain their unit to many successful seasons.

*The 1884 Brewers actually came in lower, amassing a whopping -7.8 WAR in only 54 total games, but based on Baseball Reference stats and common sense I find the -100 wRC+ Fangraphs assigns that unit somewhat dubious.

The 47th worst outfield of all time belonged to the 2011 Seattle Mariners. Despite earning almost a full win on the base paths and getting pretty good performances from Mike Carp and Casper Wells, that team managed to post a -1.3 fWAR thanks in part to the negative contributions of one Michael Saunders and the inevitable aging of Ichiro Suzuki. But wait! It gets worse!

The 2013 Seattle Mariners' current outfield consists of Michael Morse, Raul Ibanez, Jason Bay, Endy Chavez, and Carlos Peguero. ZiPS, Dan Szymborski's typically conservative projection system, thinks that over a full season this outfield would combine to just barely "beat" the 2011 Mariners, becoming the new 47th worst outfield of all time by putting up a combined -1.3 WAR. This is the worst outfield in Mariners history. There hasn't been an outfield this bad on any team in at least seven years.

Luckily, Michael Saunders is coming to the rescue! Yes, the very same Michael Saunders that (among others) led the 2011 outfield to disaster is now the best outfielder on the team, and he's returning from the DL to a unit desperately in need of his presence. Saunders is an average-ish player, and though there's some reason to believe that he has upside left I doubt that he'd be a starter on a championship level team right now. Still, he's the best the Mariners have, and I'll be glad to see the Condor spread his wings once more.

Thing is, though, someone has to go down to make room for him. So here's the question of the day: which of these awful outfielders is actually the right one to demote? Well...

OK, I'll be up front with this one: the answer isn't Jason Bay. Even though he's the star of the picture for this article, and even though we all grumbled when the team replaced Casper Wells with him, Bay isn't an untenable backup. For now. In the long term, Bay is most definitely untenable. 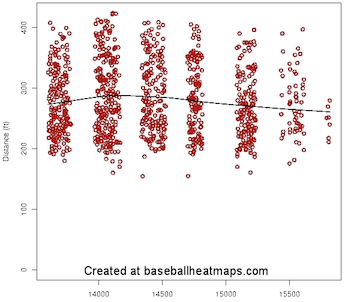 This is a plot of Jason Bay's batted ball distance throughout his career. The black line is his average distance. See it sloping downwards? That's Bay's power, draining before your very eyes. Eventually it'll be gone completely, and he'll be done as a major leaguer. The end is nigh.

But it's not here yet. For now, Bay is doing exactly what he was brought in to do: mash lefties (he's posted a 144 wRC+ against them so far, including a game-tying home run against Jason Vargas yesterday) and be better at defense than Raul Ibanez (he has yet to throw a lawn dart). Honestly, much as we bemoaned the Wells DFA, Jason Bay's not much worse than Wells at being a short side platoon outfielder. Worse glove, better bat. I still think it was wrong of the Mariners to pigeonhole Wells into that role in the first place, but within its constraints choosing Bay wasn't an awful decision. He still has some utility, and while I don't really want to see him back with the team next year I don't think he's the right choice to excise from the roster right now.

Endy Chavez is the Robert Andino of the outfield: he can play all three positions with competent defense, and he can't hit a lick. He hasn't done badly for himself so far in this young season, but that's mostly due to an inflated .390 BABIP. Don't get your hopes up. Chavez, like Andino, is a replacement level player who ideally wouldn't be on a major league roster. His plate discipline is also trending down:

Endy Chavez was a decent backup outfielder four years ago. Now? Not so much. Sure, he can fill in at all three outfield spots, but so can any other AAA CF out there (including the still-on-waivers Casper Wells). This is what drove me insane about the articles this spring that praised Andino for his positional flexibility: positional flexibility doesn't really mean anything when you're replacement level. The whole point of replacement level is that you can get a replacement level player at no cost. Losing Endy Chavez wouldn't hurt the Mariners at all, because the Mariners can find another guy who's just as good as Chavez without actually having to pay for him.

So that's it, right? The answer is Endy? Well, no. For one thing, there's the matter of roster construction: with Gutierrez down, Chavez is necessary as a backup to Saunders unless the team wants to risk putting Jason Bay in center. For two thing, I said that cutting Chavez wouldn't hurt the Mariners. Cutting some of these guys would help the Mariners. Speaking of which...

Stick a fork in him; he's done. Remember the heat map I showed to suggest that Jason Bay's power is slowly draining? From the same data source, here's Ibanez's average batted ball distance on fly balls and home runs from 2010-2012, followed by his average distance this year.

Numerically, the power is gone. Visually, the power is gone. His O-Swing% is .2 percentage points off of his career high, his Z-Swing% is at a career low, and his contact rate is 1.1 percentage points off of his career low. His BABIP is awful and it's not bad luck. His defense has been predictably putrid. Raul Ibanez is quite possibly the worst player in the major leagues right now. Dumping Mike Carp has never looked like a worse decision than it does at this precise moment.

I didn't hate the Ibanez signing when it was made, but as I thought more and more about it disgust grew on me like mold on a jelly donut until eventually it was by far my least favorite move of the offseason. After the winter's acquisitions were complete, even the "veteran leadership" excuse looked stupid. Who is Ibanez supposed to be leading, anyways? Ackley is a totally different hitter from Ibanez, and by all accounts his workout routines are already great. Montero? Why can't Morales lead Montero? For Christ's sake, Kendrys Morales is what Jesus Montero wants to be when he grows up! You could not possibly find a better model for Montero's development! Smoak? Look, if Ibanez is only on the team so that Smoak can learn from him...

I get that Brendan Ryan isn't really a leadership figure, and Kelly Shoppach was embroiled in the 2012 Red Sox clubhouse issues, and Michael Morse doesn't seem like the sage-advice-giving type. But wasn't Jason Bay kept around in part because of his clubhouse presence? Aren't the coaches supposed to give advice? Isn't Felix a team leader? What is Raul Ibanez doing on this team?

Carlos Peguero's swing is so loopy that he can't hit anything moving faster than 94 MPH. His routes in the outfield are hilariously awful. He is a below replacement level player. His presence on the team inevitably means that the coaching staff will become infatuated with his power and give him more playing time than his skills merit. And you know what? I would rather keep him than Ibanez. Demoting Peguero is the obvious move for the Mariners to make, but - and I can't believe I'm writing this - I hope they don't.

I get the feeling that the Mariners blogosphere has had just about enough of Smoak. To be honest, I've had just about enough of Smoak. Visually, it seems like some time between spring training and today his swing changes reverted. I think that he could use some time in AAA to really get those changes ingrained and prove that they work in the minors before he gets another shot with the big squad. Even then, I'm not terribly hopeful that he'll ever succeed in the major leagues. I don't think he'll get demoted, mostly because I don't think the team'll carry six outfielders (even if one of them is Raul Ibanez). And again, I'd rather see Ibanez gone than Smoak sent to AAA. But this move is coming at some point in the not too distant future, and I have to say it's starting to feel overdue.

So Michael Saunders is coming back, and that's great. I'm excited to see if his plate discipline has improved again, and I'm excited to no longer be watching Chavez-Ibanez-Morse outfields. But man, this roster situation... this is not a very good roster situation. I guess I can thank the Mariners for providing yet another reminder of that age-old axiom: for every silver lining, there's a cloud.