Kyle Seager is in the midst of an absurd hot streak. Kyle Seager has recently made a significant change to his approach. Hopefully he is not Justin Smoak!

Share All sharing options for: Kyle Seager Tightens Up The Strike Zone

Kyle Seager is something of a fan favorite around these parts, not least because of one particular moderator's remarkable affection for him. I like the guy a lot, too: at one point last season I said that I wouldn't trade him for Justin Upton, and though that seems extremely silly in retrospect I don't want to convey the impression that I'm not a Seager believer. But even I, a self-professed admirer, must admit that in 2012 Seager wasn't great. He was good, and that looked great relative to the rest of the roster, but his 3.6 fWAR was inflated by some fluky small-sample defensive metrics at second base. It didn't seem like it could sustain.

But! Something has since happened that is making me re-evaluate him. Have a look at Kyle Seager's plate discipline stats so far this year.

While we're not far into the season, we are getting to the point at which swing rate and contact rate start to stabilize. Remember, changes in swing rate show up fast, partly because hitters see a lot of pitches and partly because once a hitter gets into a habit it's rather hard to break it. At this point in the year, swing rate changes can be seen as legitimate adjustments to approach... and Kyle Seager's swing rate is through the floor.

OK. That's interesting. Swinging less could do a number of things for Seager. It could get him more walks and boost his power, if he's only swinging at the pitches he really wants to hit. On the other hand, it could also get him into disadvantageous counts or cause him to fall prey to called strikeouts (Dustin Ackley, lookin' at you). Seager's absurd hot streak is certainly encouraging on this front, but I'd like to be sure. Will dropping his swing rate be good for him?

To find out, we're returning once more to analysis based on the "three true skills" of hitting: swing rate, contact rate, and power. (We use ISO as our stand-in for power.) Now, Seager's contact rate hasn't really budged since he made this change, so we're going to use that as our control variable and just look at how swing rate and ISO are correlated. Here's the procedure:

1) Find all the hitters in the Pitch F/X era with a contact rate similar to Seager's (give or take 1%). Since we have swing and contact data, this gives us a sample of 331 guys to look at.

3) Calculate the average wRC+ and ISO for each bucket. 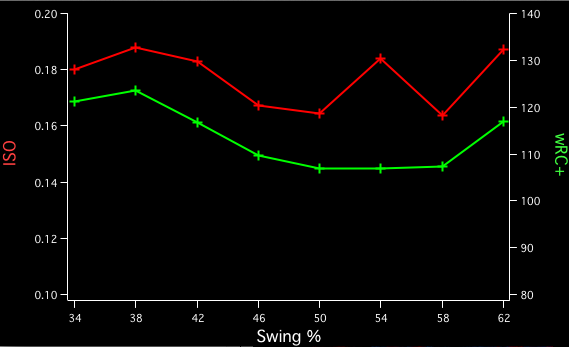 wRC+ is shown in green and on the right axis; ISO is in red and on the left axis. There's a marker where each group is located, which is at the exact center of the group (so the marker at 42 represents the 40-44% group).

You can probably throw out the groups on the far left and the far right - each of those two has fewer than seven guys in it. I call the one on the right the Vlad Guerrero group, since he's responsible for over half of the seasons that fall there on the graph, and I call the one on the left the Bobby Abreu group, since he's similarly dominant within it. But looking at the rest of the graph gives us an interesting trend.

Vlad Guerrero aside, hitters with Kyle Seager's contact rate get better at hitting the less often they swing. This is partly due to an uptick in ISO and partly due to an uptick in walk rate. See, there are two kinds of hitters who post good ISOs: guys whose primary tool is their power and who'll swing freely in order to employ it (the 54% and Vlad Guerrero groups) and guys who wait for the right pitch to drive and then blast it (the 38%, 42%, and Bobby Abreu groups). The former group's average offensive line is somewhat limited by their typically high strikeout rates, but the latter group doesn't have that same problem.

So, hypothetically speaking, if Seager were to maintain his current contact rate while sliding down the swing rate spectrum, we'd expect an increase in ISO, walk rate, and wRC+. Which is exactly what he's shown so far this season.

Now, there are all sorts of tricky questions about correlation and causation to sort out here. We know that swing rate, contact rate, and ISO are each individual "hitter skills", but we also know that they're interdependent to some degree. Do the hitters on the left of the chart post higher ISOs because they're seeing more hitter's counts and picking their pitches, or do they swing less because they know they can post high ISOs and want to draw walks as well? Or are the two permanently fixed and uncorrelated skills? There isn't really prior precedent for a guy dropping his swing rate by 10% like Seager has so far this season, but among the guys who made 6% or 7% drops I can't find any distinctive pattern regarding their ensuing ISO changes. Some saw ISO boom, some saw it bust, some saw it hold level... but we're talking about such a small sample size of comparisons that it's hard to draw a conclusion.

EDIT: There is also the question of statistical significance. User gogurt rightly suggested that I should add marks for the standard deviations of each group on the chart. I slapped my forehead and went to go calculate them... and when I did, discovered that these ISO and wRC+ values are all within one standard deviation of each other. Welp. Turns out I'm still not good at this job yet! So while we can say that there seems to be a trend, we cannot say that it is a statistically significant one, which casts further doubt on the whole scenario. Bleh. Sorry, guys, I promise I'll get better at this as I go.

Intuitively, it makes sense that moving left on the chart would improve Seager's ISO. Getting into hitters' counts is valuable, and he's been doing a lot of that on this little hot streak of his. On the other hand, there are guys in the 34, 38, and 42% groups that have 2012-Seager-esque .160 ISOs, and those guys post overall lines a lot like 2012 Seager's.

I can't guarantee that this change will make Seager a better hitter, or even a different hitter. I can tell you that I think it's a good idea for him to hold his contact rate steady while changing his swing rate to match the swing rates of the most successful hitters with that contact profile. Mostly because those guys were very good at hitting, and it would be nice if Seager was too. It's a worthy experiment. The early results are astonishingly good. Now we just need to keep an eye on it.

Before this season, I wouldn't have bet on Seager recreating his 3.6 WAR from 2012, mostly because he wasn't going to get the fluky 2B defensive boost again and I didn't expect him to improve as a hitter. But this change has moved him from a group of guys with an average 106 wRC+ to a group of guys with an average 116 wRC+, and that could be a big deal. A 3B with average defense and a 116 wRC+ is usually worth 3.5-4 WAR. So, uh... I'm not saying this is a sure thing, but Seager may be in for less regression than we expected.

As a Mariners fan I hadn't known this until now, but it turns out it's possible for a hitter to make changes at the major league level and improve. Quick! Someone tell Dustin Ackley!