Michael Morse is playing with a fractured pinkie. Should he be?

Batting against Tanner Scheppers in the bottom of the seventh inning on April 11th, Michael Morse took an inside fastball off his pinkie finger. Umpire Paul Emmel ruled the ball had also struck the bat, so Morse didn't immediately earn first base -- he'd get drilled again later in the at-bat, rendering the matter moot -- but he was clearly in pain. Trainer Rick Griffin examined his hand after the incident, and the slugger was removed for a pinch runner once he reached first. X-rays later revealed that Morse had fractured his right pinkie.

Despite, you know, breaking a finger, Morse made a quick recovery and was back in the lineup five days later. He acknowledged that his pinkie hurt, but reportedly said that the injury wouldn't affect him at the plate. He didn't even wear a brace. Supposedly, his quick return could be explained partly because he doesn't keep his right pinkie on the handle of his stick.

Now, the difference between those stat lines cannot be completely explained by a fractured finger. Morse wasn't going to maintain his torrid pace, and by the same token, going forward I'd expect him to slug above .250 whether his pinkie is healthy, broken, or sawed off.

Interestingly, Morse and his manager have downplayed the injury. Eric Wedge suggested that the biggest fallout was that it forced Morse to miss a few games, a hiatus that broke the new acquisition's rhythm. Last week, Wedge told Ryan Divish: "(Morse's) timing has been a little off... I don't think the finger is too much of an issue." On Twitter, I asked Divish if he'd talked to Morse about his situation, and I was told that Morse largely echoed his skipper's comments.

It's certainly possible that Morse's injury has nothing to do with his recent struggles. I am not Michael Morse: I don't know how a broken pinkie affects his swing, his preparation, or anything else. People respond to pain and injury in all kinds of ways, and it's not out of the question that the lingering effects from getting hit are negligible.

But I'm skeptical. First, the timing is stark. It's hard to believe that, immediately after breaking a finger, Morse went from hitting like Ken Griffey to batting like Munenori Kawasaki simply because of disrupted timing at the plate. Such a stark discrepancy in output -- particularly in the power department -- from pre-broken finger to post-broken finger can probably be at least partially pinned on the injury itself.

More to the point, I'm not sure why Morse or anyone else insists that keeping his pinkie off the bat handle reduces the injury's impact. It's not like Morse doesn't use his pinkie at all. It's just not hovering in the air, it actually touches his other hand: 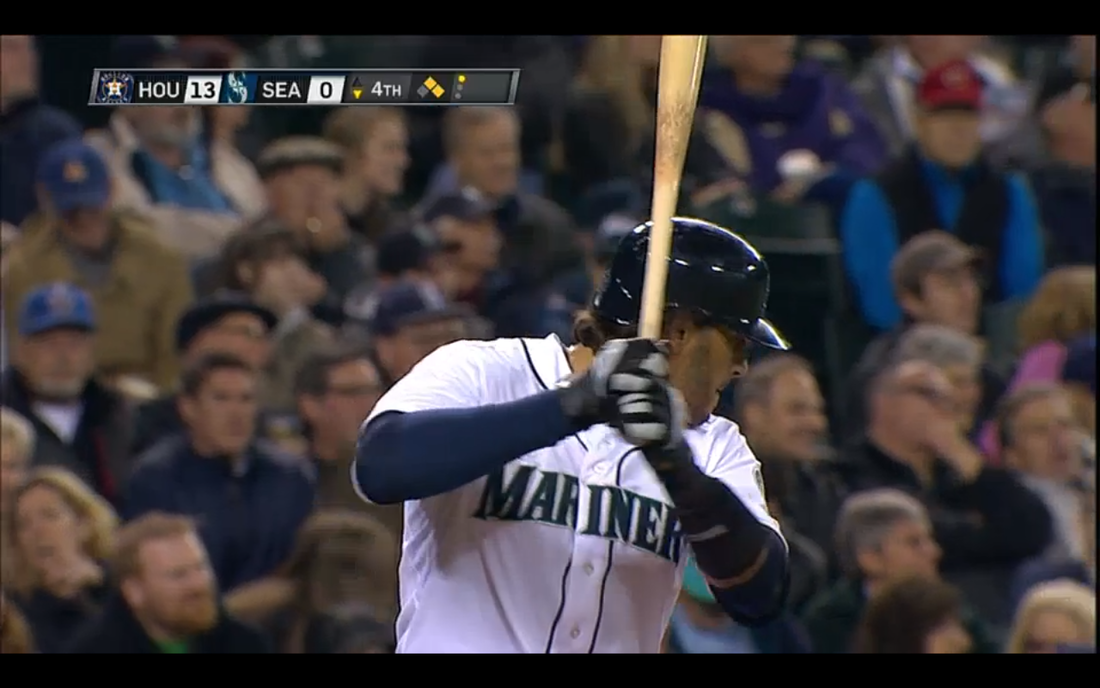 It also doesn't look like he just rests his pinkie against the bat: it appears that he presses it hard against his hand*.

* As an aside, try swinging a bat with your top pinkie lightly touching your hand, as you might be tempted to do if you had a broken little finger. It's really, really hard to get a good grip like that. 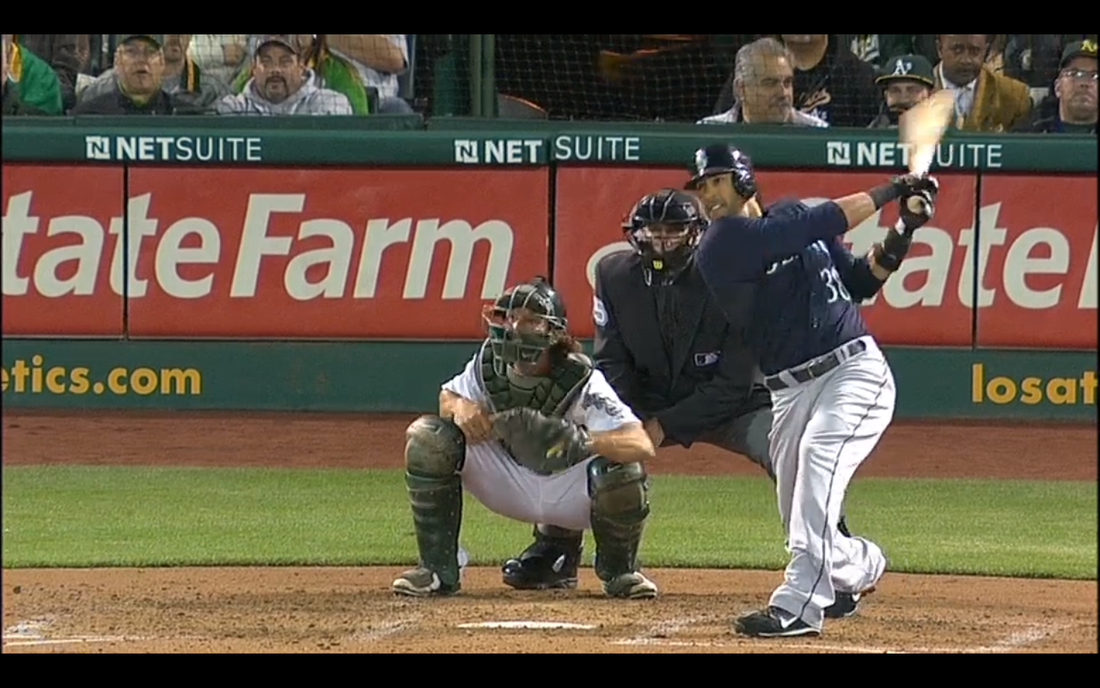 The above picture is him hitting one of his homers in Oakland. Notice how the pinkie isn't hovering off the bat, but is actually actively pressing against his hand throughout the swing. I literally cannot imagine how that wouldn't hurt if I had a broken pinkie.

And from all appearances, it doesn't look like the injury has caused Morse to adjust his setup significantly. He's still putting his pinkie where he always did: 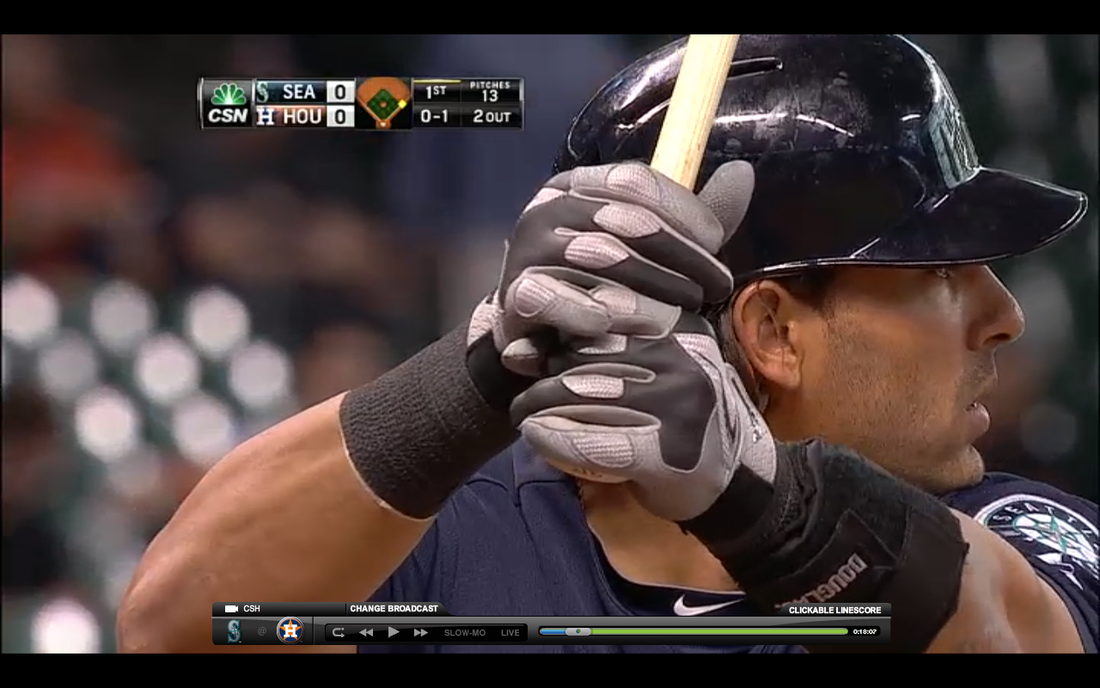 Again, I'm not him, and I don't know what it feels like to press a broken pinkie into a bat several times a day (while using it to anchor a rather violent swing, no less). But it looks pretty damn painful, and it doesn't seem out of the realm of possibility that Morse has slightly adjusted his swing or his grip to take pressure of off his finger. To extrapolate on that, it certainly seems plausible that a minute adjustment like that could screw up a hitter's timing, and possibly a whole lot more. Regardless, it's pretty clear that Morse is playing through pain:

Only he knows how much it's affecting his performance, or how long it'll take him to get close to 100% healthy again. That said, if it's affecting him significantly, he should let the injury heal. It will do neither him nor the Mariners any good if he tries to play through a nagging malady, particularly if it lingers throughout the season. The pinkie may be a small bone, but it's a vital part of a hitter's body: it's tough to grip a bat strongly without a fully functional pinky, and if the injury has compromised Morse's ability to do so, he's already discovered how difficult the break makes it to hit the ball hard consistently.

To get a better idea of how this might affect Morse from a medical point of view, I reached out to my e-migo Rhett Fieldsted, a student in the University of Utah's doctoral program in physical therapy. I asked him how a broken pinkie would hinder a player, and he said that there could be grip-related repercussions: "While grip strength hasn't been strongly correlated to swing/contact strength, physiology leads us to believe that forces cannot be transferred down the bat as well as with a pinky with no pathology." Citing this study, Fieldsted added that when the pinkie is taken out of the equation, "grip strength is reduced by 33%." We can't know how much the pinkie is bothering Morse specifically, but there is some evidence to suggest that it's a tricky injury to play through.

As a capper, I appreciate Morse's effort to play hurt. It takes admirable dedication and commitment to lace up the spikes and grind through games with a broken finger. As a Mariner fan, it's a pleasure watching a guy who cares enough to play through difficult physical circumstances. If I were an executive handing out a multi-year contract, I'd love to have a gamer like that on my team. But I think I'd rather have a player who knows his body and understands that there are some injuries that are simply too difficult to play through.