The Mariners have passed the Angels in the win column.

Short Erick Aybar and Alberto Callaspo, the Los Angeles Angeles ran out a lineup Thursday evening featuring just one lefty against a pitcher with a good slider and a poor changeup. That one lefty was Josh Hamilton, who has struggled in 2013. The pitcher was Brandon Maurer, whose 93 pitches featured just three changeups.

Hamilton lined one of those changeups for a single, but otherwise had a quiet game. As did the eight right-handers in the lineup. No one looked comfortable as Maurer ran his fastball up to 96 MPH and peppered sliders down and away.

Maurer had limited minor league experience due to injuries and hadn't played above AA coming into 2013, making it easy for people to latch on to the narrative that the desperate Mariners rushed him following two rocky starts. When Aaron Harang was acquired, some expected him to replace the "in too deep" Maurer. Instead, the Mariners stuck with their belief that he was one of their five best starting pitchers and he has responded well, stringing together three strong starts and getting his season numbers closer to the range we'd expect from a No. 4 starter.

The changeup is still a concern, but Maurer has been a comforting ray of light during the past two weeks of darkness. 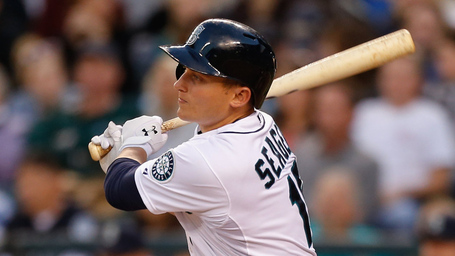 Speaking of comforting rays of light, is Kyle Seager your favorite Mariner yet? The sweet swinging Seager went 3-for-4 with two singles and a towering home run, driving in half of the Mariners' runs. He's now hitting .306/.379/.529.

Carlos Peguero will enrage but also dazzle. Consider this swing:

Now consider that this came at the end of an eight-pitch at bat and resulted in a baseball flying high over the center field wall, striking the upper third of the batter's eye in what the Mariners broadcast crowned the third longest home run in Safeco FIeld history at 451 feet. Hit Tracker Online has it at 440 true distance, but either way: that pitch and that swing had no business resulting in such a blast.

Peguero's power tool is so great that it's understandable why the Mariners continue to develop him and provide opportunities. They'll never make him into a star, but maybe they think they can make him into Chris Davis.