Win Expectancy chart, courtesy of Fangraphs, for the Mariners at Astros game on April 24, 2013. 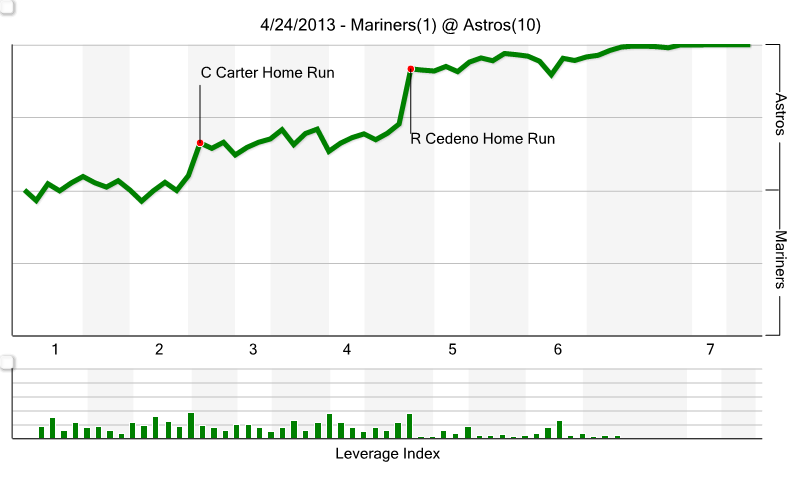 Ugh. Uuuuuuuugh. The Mariners are better than the Astros, but they didn't look it today, getting shellacked due to rather unsavory performances by Jason Vargas Joe Saunders and Blake Beavan. Beavan had five strikeouts, which is kind of interesting, but then again Astros. At least Ackley, Seager and Smoak were good.

I'll be the first one in with the call: this season is over from a competitive standpoint. Not because the Mariners are losing to the Astros, of course. (That would be really reactionary.) No, the season is over because for the second time in less than a week the Mariners have made a change that they know will make them worse on the field for reasons unrelated to on-field performance. Ryan is clearly better than Andino. Thames is clearly better than Peguero. Just one of them, OK, maybe the FO is being stupid again. But both? Either they've thrown in the towel or they're so thick that there's no chance of competing anyways. Either way...

1) With Ryan benched and Andino terrible, the Mariners are obviously queuing up a minor-leaguer to replace one. Who comes up first: Miller, Franklin, or Triunfel? What's the reasoning?

2) Will Blake Beavan improve his strikeout rate in the bullpen, or is his stuff too mediocre for it to matter?

3) Who will replace Eric Wedge as the Mariners' next manager?