I'm eager to watch the next great Seattle Mariners baseball team. Until they show up, I'll be unsure of where I stand as a Mariners fan.

I started out as a baseball fan without a strong team affiliation. Unlike many of you, I wasn't force-fed the game (my father's sport is basketball and my mother is English) but found a love for it playing at church picnics and recess.

A family friend later gave me a few hundred baseball cards, which was my first real exposure to Major League Baseball. I spent hours sorting and re-sorting the cards and scouring the stats on the back. I began carrying a thick binder containing rosters and news clippings from every team pulled from dial-up and the newspaper, memorizing as much as I could.

When I was in second grade I showed my teacher. She asked me to turn to the Minnesota Twins section before she began speaking excitedly about Kirby Puckett, recalling his heroics and mimicking his batting stance. As a shy kid who would have done well at the Milford Academy, this made such an impression on me. It probably remains my most memorable interaction with a schoolteacher.

My family didn't have much money back then and I did a lot of my clothes shopping at Goodwill. I bought anything baseball related, regardless of the size. I'd be happy wearing a dress-like large t-shirt as long as it had baseball. I remember a Little League coach ragging on me for wearing Mariners sweats, a Yankees jersey-shirt and an Astros cap to practice one day.

Sometime around 1994 my friends down the street got "Ken Griffey, Jr. Presents Major League Baseball" for Super Nintendo. I didn't know who he was, but thought his name was "King Griffey, Jr." for the longest time.

No, the Mariners came later. I think the first game I remember was the one game playoff in 1995, although I can't be sure. I can picture myself sitting on the living room floor watching and I seem to remember getting excited by "EVERYBODY SCORES," although I'll acknowledge that it could be an implanted memory. I think it's possible, though, as the game would have been a big enough deal in Vancouver, WA that my dad might have been curious.

It wasn't until 1996 that I became a certified Mariners fan. My family moved into an apartment complex where I became best friends with a kid who converted me. I adopted the Mariners as my heroes, from Mark Whiten to Alex Rodriguez, and my bedroom walls served as a shrine to the team until I was 13 or so.

The answer lies somewhere in the middle and is still probably closer to the former, but it kills me a little bit having to ask.

The losses no longer hurt. The errors and blown RBI opportunities no longer enrage. That's not a good sign but I still hold out hope that a playoff run would awaken something within. I need an "EVERYBODY SCORES" to awaken the fan and drive out the impartial observer.

There are plenty of fans out there still living and dying (and dying and dying and dying) with the team, but they need that moment too. It's been over a decade since the team has seen the playoffs. There are high school kids who don't remember the 116 win season. There are professional baseball players born after the Mariners' 1995 miracle run. It's no longer a bump in the road. The positive memories of 1993-2003 have faded enough that we can't easily draw from them after watching a string of losses.

Survival Guide to the 2013 Mariners 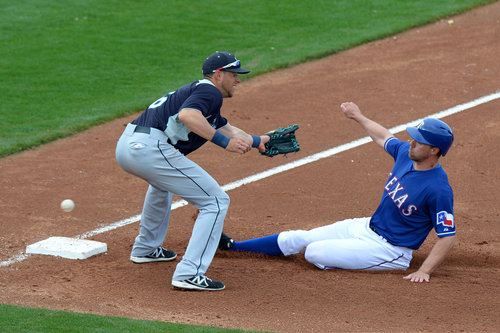 On Saturday evening in Arlington the Mariners ran out a team with a catcher that couldn't catch, a reliever that couldn't relieve, and sluggers that couldn't slug. They were shut out for the second consecutive game despite playing in one of the most famous hitters' parks in the league and, even more damningly, despite seeing Saturday's starting pitcher leave during the second inning with an injury.

The Texas Rangers ran away with this one in the eighth inning once Yoervis Medina began doing his best pre-Crash Nook Logan impersonation, but did the Mariners have a chance down 0-2? Did they have a chance with two on and no one out for Kendrys Morales? Technically, I guess. But no.

That's just where we're at.

The silver lining of this one was Brandon Maurer, who pitched 6.2 innings while surrendering just two hits along with three walks.

Unfortunately, both hits were solo home runs. We've mentioned that Maurer might struggle against lefties if he kept relying so heavily on his fastball and slider, and sure enough A.J. Pierzynski crushed a hanging slider and David Murphy did the same to a grooved fastball.

Otherwise, this is exactly the type of start we hoped Maurer could provide. His command wasn't great and he didn't miss many bats, but he kept the ball in the lower half of the zone and showed enough stuff to keep hitters off balance. This type of start won't always produce a .000 BABIP or just two runs, but it's a great place for the rookie to build from and a departure from his first two starts.

About that changeup: Maurer did attempt to throw it more in his second start against the Ranger lineup. On the 14th he only threw 3. Tonight he threw 13. Unfortunately, only 4 found the strikezone. There's a reason why he doesn't like throwing it. He spiked one to Pierzynski before going back to the slider.

About the curveball: He also threw a few more of his slow curveballs. Last time out he threw 2, this time 5. Here's one of them:

Maurer's slider and changeup are both thrown in the high-80s, only a couple ticks below his fastball. If he can get this pitch (low-mid 70s) to where he can locate it consistently at the knees or lower, it could be a useful change-of-pace offering for him. This wasn't a particularly well placed pitch to Adrian Beltre, but he was geared up for something faster.

(Near) Death to Flying Things: Franklin Gutierrez almost made one of his greatest catches to date until that one fan we all hate intervened.

Other angles show that Guti would have had a glove on it if the fan hadn't been stepped in. He hung on the wall for a moment and called for interference, which wasn't granted.