The Greatest Game Ever Forgotten

April 20, 2013 marks the 23rd anniversary of Brian Holman's near-perfect game. To commemorate the achievement, Lookout Landing is republishing this story from Pro Ball NW in 2011, which is about an entirely different game altogether.

Share All sharing options for: The Greatest Game Ever Forgotten

The date was April 20, 1990. I remember the moment all too clearly: the ball hit sharply, perhaps a little too much so. I saw Henry Cotto sprint toward the wall, watched his neck crane upward, felt my stomach sink. The Mariners, who had never had so much as a no-hitter, saw a perfect game trampled under the plodding feet of Ken Phelps as he trudged around the bases for what would be the final time. I watched Brian Holman as he struck out my favorite baseball player, Rickey Henderson, to complete his one-run, one-hit complete game. Holman was my favorite young player on a team full of them, an easy guy for a twelve year-old to like; after all, the man looked twelve himself.

It was the second best game the Mariners played against the Athletics that year. 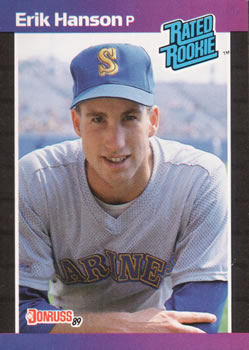 I don't remember August 1, 1990, but that's fitting. The pitcher that day, Erik Hanson, is seemingly destined to be forgotten. Tall and lanky, the former second-round pick would have been a natural descendant of Mark Langston, if not for the man who was actually obtained in the Langston trade the previous year. Randy Johnson and his gorgeous locks of hair may have captured the city's heart, but at first it was Hanson who was the far superior pitcher. Blessed with a 94 mile-per-hour fastball and one of the best curveballs in the game, Hanson turned in a performance on the first of August that was equal parts legendary and apropos.

The enemy was the familiar champion Athletics, led by the stone-faced Dave Stewart. Hanson was perfect until the fourth, when Carney Lansford collected one of the 2,000 liners into the hole that were the only thing he ever hit. As Hanson concluded the ninth inning on five pitches, that single remained the only one the Athletics could manage.

Unfortunately, the Mariners were equally stymied: Dave Stewart had his own shutout going, and so the veteran came back out for the tenth. So did Hanson. But after Jose Canseco worked a full count, and Dave Henderson collected the second hit of the night, Hanson stood at 121 pitches and was obviously worn out. Luckily, Mark McGwire swung at the first pitch, hitting a hard ground ball straight to short and allowing an inning-ending double play.

Stewart came out for the eleventh inning and stranded Ken Griffey Jr. after a one-out double. He became the final pitcher to work eleven innings in a game. The rest was Mariners baseball: Mike Schooler came out to relieve Hanson, gave up three consecutive singles and the game.

The final boxscore from the game:

According to Bill James' Game Score metric, the duel between Stewart and Hanson netted a combined total of 188, the single highest score not only in Mariners history but of any game in the last forty years.

Erik Hanson went on to win eighteen games for the M's that year. His 6.9 fWAR was the second highest in the American League. (He didn't receive a single Cy Young vote.) By that same metric, he ranks as the fifth greatest Mariner pitcher of all time, providing three-quarters of the value of Jamie Moyer in less than half the innings. His FIP stands at 3.25. Among Mariners who have thrown at least 300 innings, his is the lowest in team history. It's better than Felix Hernandez, better than Randy Johnson.

Following a strong 1993 season, Mariners ownership decided that their young arbitration-eligible pitcher was no longer affordable. They shipped him off to Cincinnati with Bret Boone for Dan Wilson and Bobby Ayala. In this case, they happened to be correct; Hanson put in a couple decent years before his shoulder gave out and he fell in love with the game of golf. Still, Hanson deserves better than to be relegated to the obscurity of the early nineties, of faint promise, arm injuries and Greg Briley. For a franchise with such little greatness, Hanson's shouldn't be forgotten, no matter how fleeting or wasted that greatness was.