Coming into the game, a popular narrative was that Opening Day 2013 marked the dawn of a new age for the Seattle Mariners offense. The lineup featured respectable thumpers in the middle and was littered with young players ready to "pop." Finally, Felix Hernandez wouldn't need to put the full weight of the club on his shoulders. He had backup.

Instead, the Mariners stuck to the 2011-2012 gameplan: scrape to victory behind a single timely hit and a dominant showing from King Felix.

The Mariner lineup managed just five singles and four walks. Franklin Gutierrez drove in the only runs of the game with a single up the middle. Morse, Morales, Smoak and most others failed to make any sort of impact on the game.

Thankfully, Felix knew the drill and happily continued his tradition of ruining the A's' Opening Day. He was on cruise control for 7.2 -- two hits, no walks, 8 strikeouts -- before it suddenly became apparent that manager Eric Wedge stuck with his ace a little too long. Seth Smith crushed a double and Eric Sogard drew a walk before Felix got the hook.

The bullpen kept the A's off the board and Felix got credit for the win in another nail-biter, just like old times. The Mariners improve to 1-0.

I've been awake for 27 hours so let's jump to the bullet points: 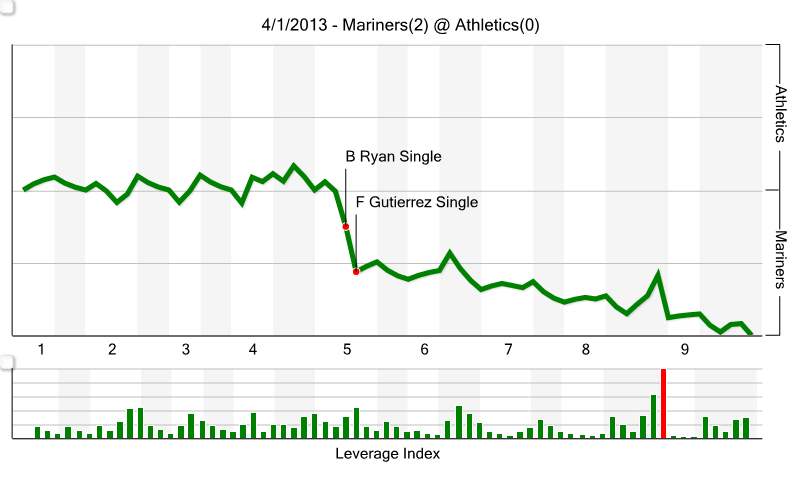