Contact/Approach - Judge's swing is extremely long and there's a ton of swing and miss to his game. His pitch recognition isn't great, but he is patient and will draw walks. Think of a Jay Buhner type ratio of walks and strikeouts.

Power - It should come as no surprise that Judge has enormous raw power just by looking at his size, but that raw power hasn't really shown up in games, sans a two homer effort against Mark Appel last year. Still, the batting practice sessions are impressive, and some swing adjustments - such as shortening the swing path - should make Judge a classic power hitter in time.

Glove - Judge has a plus arm, and is a solid right-fielder right now. With that size there's obviously the risk that he'll have to move to first base or become a designated hitter, but he's a good athlete with good ball tracking skills who should stick in the corner of an outfield for several years.

Speed - Well above average speed for his size, and doesn't make base-running mistakes.

Why they would: Judge's power is matched by few in the draft, and if he maxes out he's an above-average corner outfielder with the potential for all-star seasons.

Why they wouldn't: He still hasn't put up the kind of power numbers you'd expect with his size and strength, and guys with his size generally don't stick in the outfield.

Contact/Approach - Crawford hits line drives to all parts of the field, thanks in part to strong wrists and good bat speed. He's got above-average pitch recognition, but will need to develop some patience at the next level.

Power - The left-handed hitting shortstop has deceptive power, and puts the ball into the gap with authority. Don't expect outrageous home run totals, but Crawford has the type of pop that could give you 40 to 50 extra-base hits a year, which is pretty solid for a shortstop.

Glove - Crawford has a plus arm and good footwork but doesn't have the range of an elite shortstop. I think he can stick at the position, but he's not a lock like Oscar Mercado. If he were forced to move, I think he'd be a quality second-baseman and the bat profiles there as well.

Speed - More quick than fast, but he reads pitchers very well and should steal bases at the next level.

Why they would: Crawford is the best up-the-middle prospect in the class, and profiles to be an above-average regular at shortstop who can hit from the left-side. Those guys do not grow on trees.

Why they wouldn't: He may go in the top seven, and the Mariners haven't exactly shown a propensity for selecting prep bats this high. 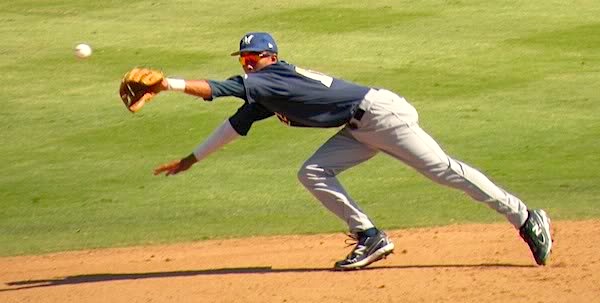