Brandon Maurer surprised a lot of people this spring when he jumped ahead of "The Big Three" and made the rotation for the big league club. As eyes turn to the upper minors to watch that remaining trio of top pitching prospects, Seattle fans should know that there are more highly talented arms on the farm.

The crème de la crème of the minor league system for the Seattle Mariners has been considered pitchers Taijuan Walker, Danny Hultzen and James Paxton for a while now. When right-hander Brandon Maurer broke out during the 2012 second half on his way to earning himself recognition as the Southern League's Most Outstanding Pitcher and the Seattle organization's Most Improved Player Award, that "Big Three" became the "Big Four" to many. Now that Maurer is in the big leagues - having earned his first big league win on Sunday - the focus has shifted back to Walker, Hultzen and Paxton. But the Mariners boast a second trio of talented starting pitchers in the lower levels of their system that have generated a lot of buzz of their own.

Right-hander Victor Sanchez and left-handers Tyler Pike and Luiz Gohara are each new to pro ball in the last 18 months, but the three are already showing that they could have the ability to take the torch from Walker, Hultzen and Paxton as the next big things on the mound for the Mariners. 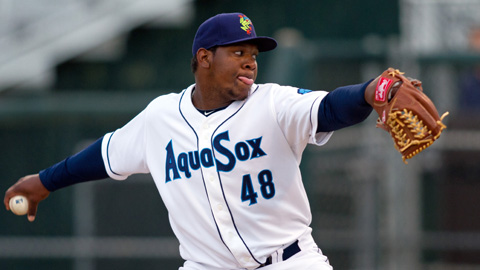 Sanchez, who is a tank of a young man at an even six-foot and a thick 255 pounds, pitched a full year of Short Season ball for the Everett AquaSox last year and performed very well in the college-heavy league despite being the youngest player there for the whole season. He ranked 2nd in the circuit in innings pitched (85) and strikeouts (69) while allowing only 7.3 hits-per-nine and allowing only five home runs in his 15 starts. Sanchez's poise and polish belie his age and allow him to maximize the effectiveness of his arsenal. His best pitch is his changeup, which should tell you something about him right there. The pitch has good fade and separation from his fastball, which Sanchez usually works with in the 90 to 92 range, although he can get it up to 94 when he needs a little extra - as he did in a late season at bat against one of the Cubs' top prospects, Dan Vogelbach.

The right-hander also has both a slider and curveball, but the pitches aren't always easily identified as one or the other and neither is sharp or a plus pitch at this point. But Victor succeeded in 2012 in the Northwest League because he had plus command of his fastball to both sides of the plate, used his changeup in the right situations and could keep hitters honest with his breaking stuff. An extremely even-keeled competitor, something that isn't always natural from the Latin kids, Sanchez has a pronounced "Felix Twist" in his delivery, something that helps him stay on line in his delivery and hide the ball from hitters.

Sanchez had an appendectomy during the offseason and thus got a late start in the spring, but he should end up being assigned to Clinton - an assignment I was told the Player Development staff seriously considered making with him last year as a 17-year-old - once he's ready to go, which should be fairly soon.

Pike was the club's 3rd round selection out of a Florida high school in the 2012 draft; Seattle bought him out of his Florida State commitment and sent him to complex ball in Arizona. The lefty led that league in ERA (1.78), posting great strikeout numbers (10.1-per-nine) and allowing very few hits (6.0-per-nine) in his 11 starts in a notoriously offensively tilted league. Tyler earned an Arizona League post-season All-Star nod and the 19-year-old was given an aggressive assignment to Clinton to start the 2013 season.

Another pitcher who gets rave reviews for his competitiveness and makeup, the 6-foot Pike has a solid but unspectacular repertoire that really plays up because of his command. His fastball works comfortably in the 89-91 range but he can dial it up a notch when needed. The big overhand curveball was a bit inconsistent last year but I heard good things about it through instructs and spring, and that offering and the changeup have both showed plus potential early.

An athletic left-hander with command who has an easy, repeatable delivery and can throw three pitches for strikes is going to move quickly, and that is exactly Pike's profile. He's already turned in two solid starts for Clinton in the pitcher-friendly Midwest League and as his confidence starts to snowball at that level he has the potential to get better quickly. 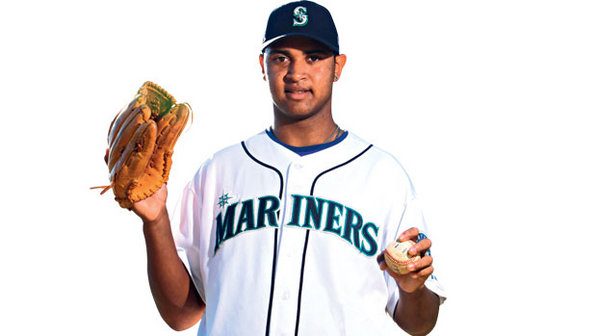 For a 16-year-old with no official professional playing experience on his baseball card, Gohara has a surprising amount of helium around him these days - perhaps more than any Mariners prospect in recent memory. Signed as an international free agent out of Brazil shortly after his 16th birthday, the big left-hander made it to fall instructs for the M's and impressed everyone on the coaching staff that saw him there, earning comps to Sanchez and to another big left-hander - New York Yankees' ace C.C. Sabathia.

When he opens the 2013 season on a roster (maybe as high as Everett) he'll still be easily one of the youngest players in pro ball. He currently works with primarily a fastball and curve, with his heater having touched as high as 94 or 95 since coming stateside and both pitches being well commanded. At 6-foot-3 and a solid 220 pounds, Gohara boasts long limbs and a sound delivery that he repeats well and was said to be working on expanding his pitch selection (changeup, slider, possibly a cutter) down in Arizona.

As Jeff wrote back in August when Gohara was signed, he is just 16 so he "could be" a lot of things, but right now, today, he is a very real pitching prospect for the Mariners that is worth keeping a close eye on. And having a profile that seems very similar to that of Sanchez, he could move up the ranks quickly.

The top ranked guys in Walker, Hultzen and Paxton are certainly well regarded for a reason, but Sanchez, Pike and Gohara all sport at least mid-rotation potential of their own and are also worth following closely. Maybe they are not the "Big Three", but perhaps they could be the "Next Three".

Rick Randall contributes a bi-weekly column on the top prospect happenings in the Mariners system for Lookout Landing. Rick's in-depth daily detailed work on the ups and downs in the Mariners' minor leagues can be found at SeattleClubhouse.com.