Seattle split the series with Texas.

Share All sharing options for: MLB Scores: Mariners Rally For 4-3 Win Over Rangers

After two dreary outings, Brandon Maurer fired the best game of his Mariner career on Sunday. The 6-foot-five right-hander allowed three runs -- two earned -- in six innings, striking out five while walking one. From both a results and a process perspective, it was a much better outing for the rookie than either of his previous tries.

Maurer's first two starts were marred by poor command. While he was throwing plenty of strikes, his fastball wasn't pinpoint and he caught too much plate with his slider. Today, he was better with both offerings. He moved his fastball -- which sat at about 93 and touched 96 -- around the zone, and he used his breaking ball effectively as a strikeout pitch, generating eight whiffs with his slider. A look at two strike zone plots demonstrates his improvement from last Tuesday:

Two things strike me when looking at the charts. First, Maurer did a much better job of commanding his slider today. All of those sliders on the bottom right of the lower chart are pitches very likely to induce a swing and a miss, and he located well when he was ahead of hitters. We also see that he's able to throw strikes with the pitch early in the count, and still use it as a whiff-weapon when he had the advantage. It's a fantastic pitch and I was encouraged that he used it so effectively today.

On a more concerning note, Maurer is becoming a two-pitch pitcher. It's no secret that his fastball and slider are ahead of his other offerings but he only used his curve and change up a handful of times and he needs to work them in occasionally to avoid becoming too predictable. He's particularly in trouble with lefties long term if he can't throw a change. He barely used the pitch today, and not coincidentally, the Rangers lefties ate him up: they went 3-9 with a walk, two extra base hits, a couple of line drive outs, and zero strike outs. I'm not worried yet: Maurer has flashed a decent change up in the past and he is learning on the job at the moment. It is an issue to monitor though, and I'll bet Ron Washington stacks the lineup with lefties when Maurer meets the Rangers in Arlington next weekend.

As for the rest of the game, the Mariners pulled ahead in the bottom of the sixth after Kyle Seager, Jesus Montero, and Dustin Ackley pieced together a two run rally to pull ahead 4-3. Hopefully that was just the first of many occasions that those three contribute to a big inning this year. After the injuries to Michael Saunders and Michael Morse, it's increasingly difficult to envision the M's as a .500 team without significant help from at least two of those three (along with Justin Smoak). For one day at least, those four did their part to carry the offense.

Nobody scored after the sixth, and Tom Wilhelmsen worked a 1-2-3 ninth inning to salvage a series split with the Rangers. 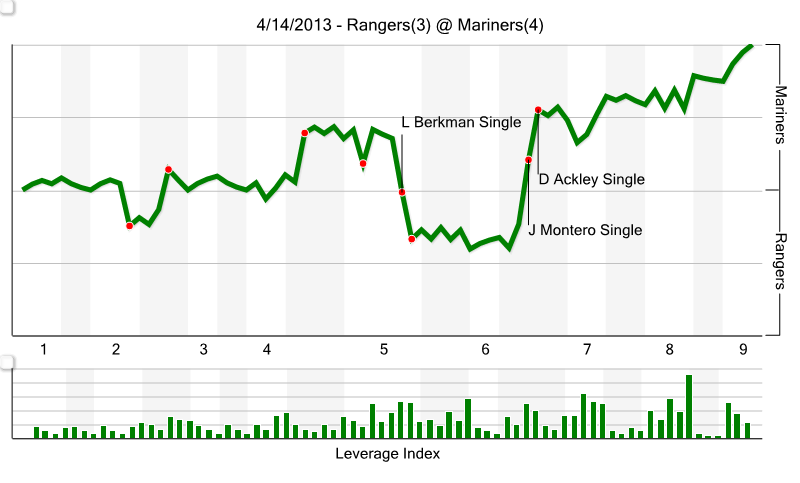