On April 11, 2013, the Seattle Mariners played the Texas Rangers at Safeco Field. Come on, guys, it wasn't that bad.

Tonight was supposed to be about Felix.

I've never been a big fan of repeating promotions - if the 1995 "Turn Forward the Clock" games taught us anything, it's that they're never as good the second time. So while I'm normally a huge fan of the Mariners' PR department, I wasn't initially thrilled by their announcement of a second Supreme Court. It just didn't feel right. The first one was held in honor of an incredibly rare and impressive achievement by one of the game's greatest pitchers. Rapidly thrown together and brilliantly executed, it felt like a well-deserved and heartfelt tribute to a Seattle icon. This one felt like an attempt to cash in on nostalgia for that previous emotional high. I understand that it was meant to celebrate Felix's new contract, and his 1500th strikeout, and (if all had gone well) his 100th win, but for me it came too soon on the heels of its predecessor and with insufficient raison d'être. And those weren't even the big concerns. No, the big concern was the risk. What happens when you come in after a rough series, get a bunch of fans excited for a game in honor of the team's ace, and then... lose? I know Felix is amazing, but so are the Texas Rangers. This promotion had an over 50% chance of blowing up in the Mariners' faces, and they knew it.

So why put on such a show? Thursday night in mid-April is hardly the best time for a promotion that you want to be well-attended. But part of me thinks this wasn't ever for the fans. It was for Felix: a gesture from the organization to show him how much he matters, even beyond his on-field performance. To show him how much the team, and the staff, and the fans, care about him. Now there's a good reason to repeat a promotion. How good must the first Supreme Court have made Felix feel? Why not, after all he's done for us this offseason, let him feel good some more?

He did all right for himself, going 6 and 2/3 innings pitched with five strikeouts against two walks and a bucket of ground balls, but the rest of the team wasn't able to get him his 100th win. Instead of being the celebration of Felix it should've been, the game was taken over by other storylines. Wedge's managing. Ibanez's fielding. Morse's injury. Felix became something of a sideshow, a secondary story in his own promotion. It's a shame. The first Supreme Court was such a magical moment. Now every time we think about it, we'll remember this one too.

So the mood on Lookout Landing is grim, and not unjustifiably so. The Mariners have just come off a three-game losing streak - two against the Astros, one with Felix on the mound. Two of the team's most productive hitters are sidelined with injuries. The starting outfield contains Raul Ibanez and Jason Bay. The back of the rotation has been disastrously bad, as have many key young hitters.

But I'm not ready to call it quits yet. What with so much going wrong, it's easy to forget what's going right. Gutierrez is on fire, and not the injurious kind. Pryor, Capps, and Furbush have looked lethal. Justin Smoak's process has been fantastic, results be damned. Iwakuma looks like a legitimate #2 starting pitcher. Michael Saunders may have taken another plate discipline plateau leap. Felix is still Felix. Honestly, I thought the reaction to this game was completely overblown: the Mariners lost by one run, not ten, and that one run was decided by fractions of an inch. If Ibanez doesn't whiff on that fly ball, and Pierzynski plants his back foot just a hair too far back on the squeeze, the Mariners emerge victorious. This wasn't a 10-2 throttling; it was an eminently winnable game. It just... wasn't won.

So yeah, tonight sucked. And last night. And the night before. But I'm hardly ready to throw in the towel on this team, and if I were you I'd back away from the cliff. After all: we're Lookout Landing. We're not here because we're prone to rending our garments and gnashing our teeth over individual games and small sample size slumps. We're here because we're Mariners fans. And we know what that means.

Morse: "I’m going to rehab this as best as I can really quick. And I might have to play through some pain."

Michael Saunders says he's "day to day" recovering from shoulder sprain. Says could have been a lot worse. 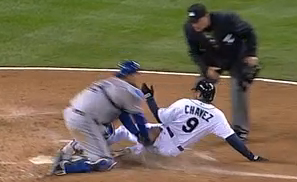 Tomorrow the Mariners will take on the Rangers again, with Hisashi Iwakuma facing off against his countryman Yu Darvish. The game'll likely be pretty heavily covered by Japanese media, which should be exciting and unusual. Are you ready for a big chunk of a powerful nation's population to pay attention to a Mariners game? Even if it's not the United States? I sure am!