I don't know what the Seattle Mariners drew inspiration from when they introduced King's Court in 2011. Somewhere out there there may be a sports franchise or fanbase watching Mariners highlights and thinking, "Hey, they totally ripped us off!"

I don't know. I do know that Major League Baseball hadn't seen anything quite like King's Court in recent years. Felix Hernandez's team-made rooting section has been a huge success and has been lauded by observers across the league over the past two seasons.

King's Court will continue to thrive, but like any other successful product, cheap knockoffs have emerged. 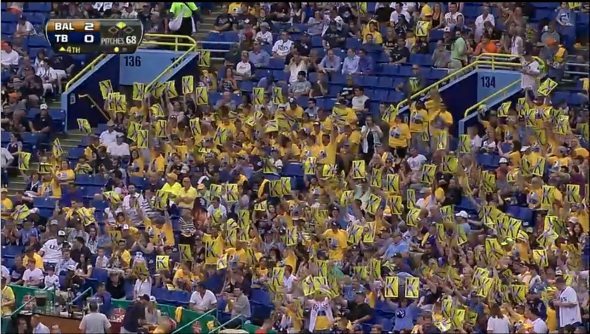 And the rival Texas Rangers

It was inevitable, but shouldn't there are least be some attempt to differentiate? Special pricing, free t-shirt, free K-card... all in yellow? The Rays at least have yellow as a (minor) part of their color scheme, but what is the Rangers' excuse?

The worst part is the names. I don't know how big of a deal David Price's dog is down in St. Petersburg, but I'll assume he's something of a phenomenon and cut the Rays some slack. Regardless, the name leaves a bit to be desired, even if the dog's name doesn't give them a lot of options considering that it's shared with MLB's Houston franchise. But the Rangers' Kia Yuniverse-- nothing kills the fun like a forced corporate sponsorship.

Maybe that's their angle. It's not about making a fun Yu Darvish rooting section. It's about sullying the concept and taking the wind out of the Mariners' sails. It's not like Darvish has been around long enough to cultivate the long-standing adoration of the fanbase seen in Seattle and (I assume, to some degree) Tampa Bay.

I get why the Rays would try anything to drum up some excitement in their empty stadium and I get why the Rangers would want to celebrate Darvish after years of being known as the team with no pitching, but neither will come anywhere close to having the effect that King's Court has on Mariner fans. Just look at that K/9 picture above.

Today, the Mariners are out to prove it with their second "Supreme Court" promotion, expanding the rooting section Safeco-wide. The only thing that would have made this better was if Darvish was starting a day earlier.

Felix Hernandez versus Justin Grimm. After that series against the Astros, we desperately needed a Happy Felix Day.