We don't normally expect to suffer through the third series of the season -- optimism is still high, baseball is still a treat at the end of the workday -- but I think we can all agree that one more game against the Houston Astros would have been impossible to endure. The back of the rotation, a no name Astros squad, embarrassing losses to a no name Astros squad, brutal showings from young players meant to inspire hope, a Michael Saunders injury... make it stop.

I don't know who Justin Grimm or Nick Tepesch are, so maybe I should have asked about them. Or maybe not, because they may not know either; one of the posts near the top of their site is titled "Who is Nick Tepesch?" Anyhooo, Adam J. Morris of Lone Star Ball was nice enough to answer three questions on short notice to help get us in the right mindset for the next four games.

Jon: Yu Darvish lived up to expectations last season, emerging as one of the better starting pitchers in baseball as a rookie. He kicked off the 2013 season by nearly going 27-up-27-down against the hapless Houston Astros. How do you think he'll be viewed among the league's elite come September?

Thoughts on Near Perfection 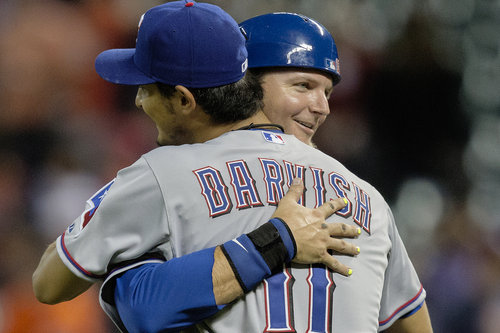 Adam: I expect Yu Darvish to be among those discussed as a Cy Young candidate come September. The near-perfect-game against the Astros definitely got him a lot of national attention, but anyone who has been following Darvish over the past year knows that, as he himself acknowledged, he wasn't at his best that day. The issue that Darvish has from game to game is his command -- his fastball command in particular against Houston was shaky, especially early on. When Darvish's command is on, he may be the best pitcher in the game, and that makes it exciting to watch him every time he takes the mound.

Jon: Tasked with replacing the production of Josh Hamilton and Mike Napoli, Lance Berkman and A.J. Pierzynski have gotten off to hot starts. How confident are you in the Rangers' offensive attack? What is the lineup's Achilles heal?

Adam: I think the lineup this season will be fine...while the Rangers lost Napoli and Hamilton, they also lost Michael Young, who was, by both fWAR and bWAR, worse than a -1.0 win player last season. I think that between Berkman, Pierzynski and Leonys Martin, the Rangers can come close to replacing the offense they lost with the departure of Napoli, Hamilton and Young. The bigger question is whether Adrian Beltre can continue defying Father Time, if Elvis Andrus can take a step forwards with his offense, and if Ian Kinsler can rebound from a disappointing 2012. The Achilles heel of the offense is probably first base, where Mitch Moreland has struggled the past two seasons to establish himself. If the Rangers were to trade for a position player this summer, I'd expect them to grab a first baseman.

Jon: Most of the Rangers roster is all too familiar to Mariner fans, but what can you tell us about Leonys Martin? What does he bring to the table and what kind of role is he expected to play?

Adam: Leonys Martin is a Cuban defector who the Rangers signed to a 5 year, $15.5 million major league deal in 2011. The consensus on him coming out of Cuban was that he was a major leaguer in terms of center field defense and baserunning, but that there were questions about his hit tool. There was some talk that he might be the team's starting CF'er as soon as the second half of 2011, but it is only now that he's getting a chance to play regularly, and even now he's splitting time with Craig Gentry. The team believes he profiles as a solid defensive center fielder who hits for average, draws some walks, has some pop, and can be a threat on the basepaths...someone like Shane Victorino might be a decent comp, in terms of overall performance level.