In Memoriam of Seattle's Forgotten Team

What started as routine research on Baseball-Reference resulted in an unanticipated and unwelcome source of pathos. I'm left with questions: can something be missing if no one is looking for it? Can you mourn a team that its own city has forgotten?

Share All sharing options for: In Memoriam of Seattle's Forgotten Team

Yesterday for my other gig at NotGraphs, I wrote an article about the Milwaukee Brewers. It’s called the Ironic Jersey Omnibus, and it’s a semi-regular feature: I go through different teams and look at the potential jerseys a fan might wear to wordlessly express their feelings about their fandom. I’m going through the NL alphabetically, and it was the Brewers’ turn. I didn't think anything about it. I don’t ever think anything about the Brewers.

But as I started going back through the early years, I felt something. I looked at Tommy Harper’s 1970 season, and felt a twinge. I looked at Gorman Thomas as a centerfielder, and my lip curled a bit. I looked at those hopelessly mediocre rotations that somehow seemed to work, and it hit me: I dislike the Brewers. It didn't make any sense. How is it possible, I wondered, to even manage to care about the Brewers, much less dislike them? What are these feelings? I asked a friend of mine from the Midwest what he thought, and he sent me this picture: 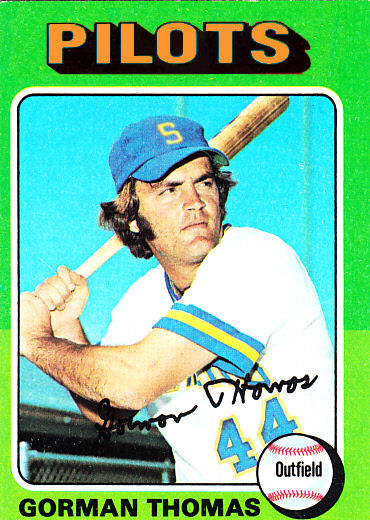 A window was opened to my soul. Am I upset at the Brewers for leaving Seattle, eight years before I was born? Apparently, yes, I am.

With the Sonics situation, I've thought and written about the reality of Oklahoma City and the prospect of Sacramento, and I've done my share of soul-searching. The result was this: I hate it when teams move. I hate what it does to towns, how it fractures decades of storylines, tears away at the veneer of baseball as a geographical, rather than an economic, construction. If teams aren't tied to places, if they’re not bound in that city’s history and culture, all we’re doing is caring about millionaires. I declared my tiny, unimportant opinion that I didn't want basketball back, not because I didn't love the Sonics, but because I didn't want to be a hypocrite. I didn't want to be a disenchanted realist, someone who excuses misdeeds because "the world works that way". I didn't want Sacramento’s story to end, even if someone else did the same for us.

And that’s how I feel about the Pilots. I grieve for a forgotten team, a team without a family. It’s so pointless that I never even realized I was doing it.

It’s a twist of fortune that the Pilots’ sole season became the subject of one of the most famous baseball books of all time, Ball Four. But Jim Bouton’s tell-all isn't about the Seattle Pilots; it’s about Jim Bouton. There’s nothing wrong with this; it’s a damn fine book, fully worthy of its continued esteem. It’s just an imperfect history of the Pilots, and because it’s so famous, no one needs to create a better one.

Sick’s Stadium is nothing but a parking lot now, and the team records have been dragged halfway across the country and locked in a file cabinet. There’s some memorabilia locked in a little display case inside a Lowe’s hardware store. The Pilots are nothing more than an anecdote, a prototype first chapter of real Seattle baseball. They had the same colors and everything. It’s been forty years, and everyone responsible has gone and left us, except for the guy who still runs all of baseball.

If anything, my feelings about the Brewers don’t reflect hostility or a deep grudge so much as a complete lack of any reason to feel anything else. Put another way: it’s not that Selig took away the Pilots, it’s that in four decades, he never even did anything with them. It just feels like our original band of misfits deserved better, somehow. Maybe we all do.