Dustin Ackley has a new swing that doesn't appear to be much improved.

In just 90 games, Ackley was worth almost 3 wins above replacement. The Mariners haven't had a second baseman worth more than that since Bret Boone in 2002. In fact, Ackley's 2.9 WAR season is 6th all time, with only Boone and Harold Reynolds ahead of him. That the Mariners barely missed Stephen Strasburg in the 2009 draft would be forgotten in no time.

2013 has brought us a Dustin Ackley complete with a new swing, and the new swing has produced one fantastic defensive shift and three singles in 29 plate appearances. Just in case you haven't had the pleasure, this is what it looks like (hat tip to Scott Weber): 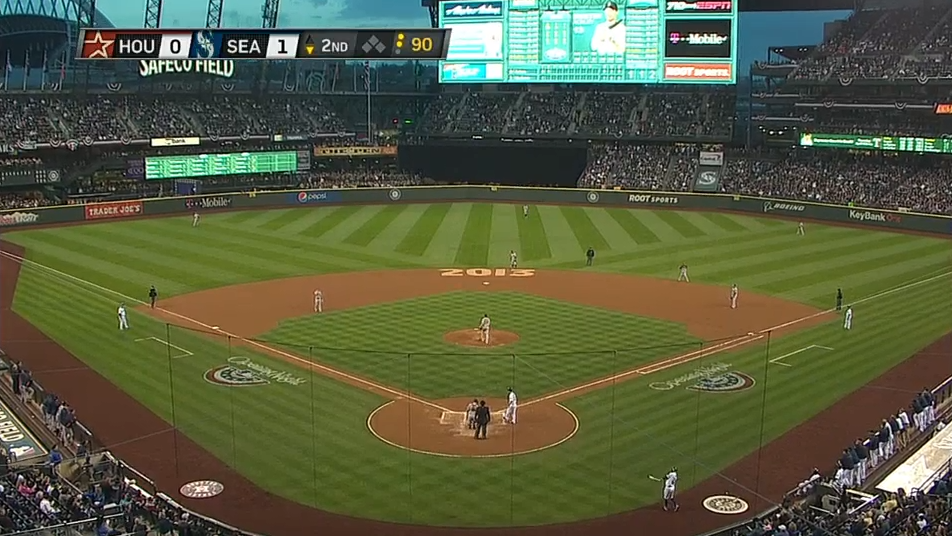 So for hitter with minimal power who is batting .111, the Houston Astros were completely convinced they knew where the ball was going. And darn if Ackley didn't oblige.

A low and away two seamer that he really should have just poked into left field and he rolls it over. Humber didn't even miss his spot. With a huge shift on, they planned to go away knowing he was going to pull it. Awesome.

This new swing is interesting though. I saw it down in Peoria where Ackley was really stinging the ball, but in the two games I saw him in he hit every single ball to the right side. This little weird timing mechanism seems like it's a nanosecond early on everything. The swing above stands in rather stark contrast to this swing from last season:

I don't know, that swing didn't do too much last year (although this is the kind of re-tooled second half swing) but of the two the 2012 version certainly seems to have more balance. But then again, I'm not the hitting coach. I'm not even a coach of anything.

I could remind myself that we're just nine games in. The sample size is so small that it's a little silly to talk about his results, but I guess it's that his results are so silly that I'm forced to talk about them. Had to read that last line twice to make sure it made sense.

Ackley has 18 plate appearances versus pitchers that Baseball-Reference.com deems to be a "fly ball" pitcher. He has four at bats against ground ball pitchers. He has, thus far, hit 12 ground balls and five fly balls. So he's turning fly ball pitchers into ground ball pitchers somehow. He has grounded out to first, second, or short nine times. He's pulled the ball seven times, gone opposite field four times, and up the middle 13 times. His three hits have come on balls up the middle. One of them went not very far. TexasLeaguers.com helps us visualize this:

For an idea about how he hit the ball in 2012, we can reference the same aerial view:

Still a pull hitter. Still a lot of friggin roll outs to the second baseman (kicks puppy), but that seems like a more equitable distribution than our early results with the new swing. A new swing which seems like it could use a nickname. Like the tick or the hitch or the career killer.

But to date, Ackley is actually making contact. A lot of it. He's only struck out three times. His swinging strike rate is 2.3%, which is like, Marco Scutaro territory. On balls thrown inside the strike zone, he's making contact with almost everything -- a 96.4% contact rate. And his batting average on balls in play is .125. This is what we get with small sample sizes, and right now the small sample size doesn't have any damned clue what's going on with Dustin Ackley.

What we know is Ackley has a new swing that has apparently turned him into much more of a pull hitter. It seems to be helping him make better contact, but the contact he's made thus far hasn't yielded much in terms of results. And although the sample we have seems miniscule, this study just kind of won't go away from my stream of consciousness while writing this post, so I'll summarize for you.

I'm not sure he likes to go by his real name because on Fangraphs he goes by Pizza Cutter, so that's what we'll call him even though it's rather goofy. He's way smarter than me and this study is a beast and you should read it. But if you don't, here's the skinny. At what point, as in plate appearances, do certain statistics become stable, with stable being defined as .70 -- that point at which one could say, "this is something that could be reasonably relied on going forward."

Here's what he found:

So while we do need to keep an eye on the sample size, it's also important to know that these results also aren't meaningless. I fully expect Ackley to start getting hits. It will happen. But it's worth paying attention to his hit trajectory over the first month of the season, and it's worth paying attention to his strikeouts, walks, and contact rates. In my irrational exuberance post about what needs to go right this year for the Mariners I rather conservatively said we need Ackley to get back to the 3-win plateau. I still think he can do it. But I'm not so sure it's going to be with this new swing.