Mariners Technically Not Whomped By A's

Share All sharing options for: Mariners Technically Not Whomped By A's

Except for the part where before this game was called off it was 12-1 Oakland in the top of the fourth. Oh, the A's scored against relievers. They scored against Chance Ruffin, and they scored against whoever the hell Jhonny Nunez is. But most of those runs were scored against Noesi, who lasted all of two innings. A strong wind blowing out did Noesi no favors, but then it's not like Noesi is deserving of a favor. Noesi's pitching also did him no favors.

You might think the rainout would be good news for Noesi, since it erases his statistics. Better to be rained out than to have the game official, after what Noesi did. But, the whole Mariners coaching staff was on hand to watch Noesi pitch horribly, and that won't soon be forgotten. Official statistics or not, Noesi further cemented his negative impression. And Mariners fans are already just about out of patience so one outing wasn't going to change anything. Noesi isn't going to poll better with fans now than he would if his numbers went in the books. Today there were no positives, except that, in some years, people will have forgotten about this, and they'll leave this performance out when analyzing Noesi's spring-training performances over time. That is, naturally, if Noesi is still part of a spring training down the line.

In some ways it doesn't matter. Noesi was never going to make this pitching staff out of camp, not without a series of devastating car accidents. There's no room for Noesi in the bullpen, and there are too many candidates ahead of him for the rotation. Noesi's been ticketed for triple-A, and then the team will pay attention to how he does there. The next move will be determined by how Noesi does as a Rainier, and people won't remember his spring training come June or whenever. Regardless of Noesi's camp, he was almost certainly going to end up in the same place.

But, just a year ago, I was excited about Noesi. I was excited when I learned of him as the second piece in the Jesus Montero trade. He was a live arm who threw a lot of strikes in the upper minors. He looked like he could be at least a half-decent starter right away, with certain upside. In 12 months -- really, 11 months -- I've grown sick of him. It's partly an overreaction, because Noesi's entire career isn't toast and he still has upside left, but he's plummeted with extraordinary speed. Noesi hasn't just fallen off a cliff -- he's jumped off a cliff with a jetpack and propelled himself straight down.

Remember buying popsicles? You might still buy popsicles if you have kids, or if you like popsicles. I'll always remember the popsicles that had jokes written on the flat wooden sticks, and you'd get the punchline after you finished the popsicle. Every time, I'd look forward to the popsicle, and I'd look forward to the joke. Every time, the popsicle was delicious, and the joke was a letdown. It'd be some stupid shit that wouldn't make a six-year-old laugh and that'd make a 16-year-old roll his eyes right out of his head. "How do pigs talk?" "Swine language." Fuck you. Popsicles are like the Jesus Montero trade, where Montero is the popsicle, and Noesi is the joke. I keep waiting for Noesi to not suck, but after this amount of time maybe I'm the problem.

Noesi allowed seven runs in two frames against Oakland, six of them earned. There were five hits, there were two walks, there was a hit batter, and there was a wild pitch with the bases loaded. There were three home runs, and while Seth Smith's homer in the first was wind-aided, Josh Donaldson's homer right afterward wasn't, and Josh Donaldson's homer in the second wasn't, really. Two of the homers came on fastballs, and one came on a two-strike slider too far up and too much over the plate. There were a couple doubles, although apparently one of them should've been caught were it not for an outfield miscommunication between Franklin Gutierrez and somebody worse. Between a strong wind and some lousy defense, Noesi didn't get help, but external conditions weren't what made Noesi's outing a disaster. They just made it more disastrous.

After Noesi came out, Ruffin allowed a homer, and Nunez allowed a homer, and shortly after that last homer the game was called. Here are some pictures of Mariner player body language after Oakland home runs. The only one missing is Donaldson's second, for which the video won't download. 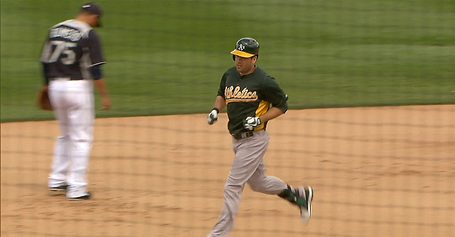 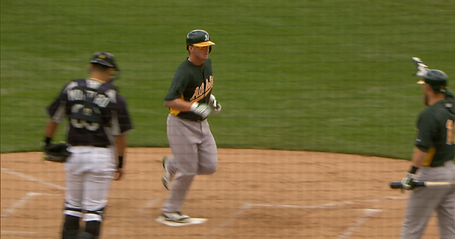 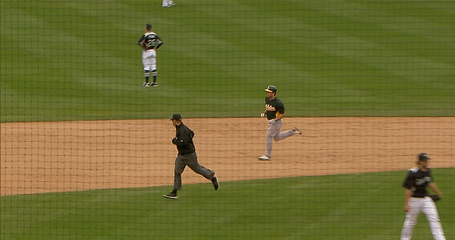 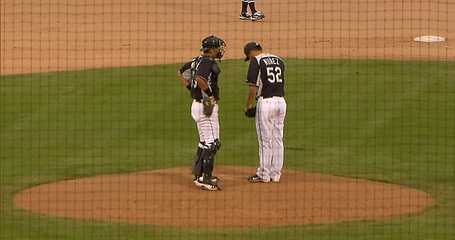 I can't really tell what the umpire is doing in #3 but maybe he just felt like doing some wind sprints. It's never a bad time to exercise and it's not like he'd have to umpire anything for about a minute or so.

For the Mariners at the plate, Casper Wells did hit a dinger, accounting for all of the offense in the three innings the Mariners hit. Wells' dinger will also be erased, just like all the homers Noesi allowed, but Wedge was there to see it and Wells didn't hurt his roster case. When Wells returned to the dugout, the first person to congratulate him was apparently Jay Buhner, which, okay: 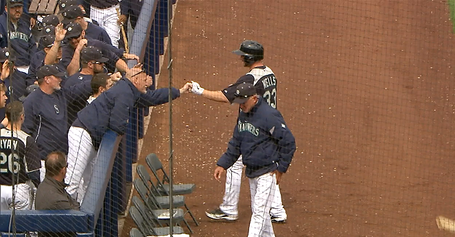 Romero would later be pulled from the game with what was diagnosed as a strained oblique. The Mariners haven't given a timetable yet, and people always hope these things will be day-to-day, but the reality of oblique strains is that we're talking about weeks of downtime. You can't play through them and you don't want to risk making them worse. They're just awful and they're everywhere and Romero's spring training is probably just about over. You just don't rush back from a strained oblique of any real severity. It's not like Romero was about to crack the big-league roster, so this isn't that sort of opportunity lost, but this is a lost opportunity for Romero to impress the big-league coaching staff, and it's never bad for a minor leaguer to have the big-league coaches paying attention to him. Alas, Romero will be fine in some weeks, and his minor-league season should get underway with little delay. He didn't just sidetrack his whole year, but now his year has begun with perhaps the most annoying of injuries. Better an oblique, I guess, than a wrist, which was my first concern.

And that's how you write 1,400 words about three and a half innings of a spring-training game that didn't count. Tomorrow some Mariners will play a B game that no one will pay attention to, and later some more Mariners will play the Dodgers in a game more people will pay attention to. But Jon Garland is starting so try not to pay too much attention, because we have only so much attention to give, and you don't want to give too much of it to something involving Jon Garland. Then you might find you're shorthanded at, say, a child's birthday, or in a crisis situation. "THE KITCHEN IS ON FIRE! WHY AREN'T YOU DOING ANYTHING!" "I PAID TOO MUCH ATTENTION TO JON GARLAND ON SATURDAY" "JESUS WHAT WERE YOU THINKING"