Thursday afternoon, the Seattle Mariners took on the undefeated Kansas City Royals, and I've had this game circled on my calendar for a while. That's not true, I don't have a calendar. But if I did have a calendar, I would have written this game on it, and circled the date in anticipation. That's not true either, I don't know why I said that. Thursday afternoon, the Mariners played the Royals, and some time ago I noticed the Royals weren't losing so I was looking forward to the Mariners handing them their first loss. Which the Mariners did! The Royals were toppled at last! "Sure, but it's spring training," you say. "It doesn't matter," you say. "The Royals don't really care that they lost to the Mariners," you say. But, evidence to the contrary:

"Unfortunately," Royals left fielder Alex Gordon said. "It means something to us but, in the long run, it really doesn't. We just try to get our work in."

"It means something to us but, in the long run, it really doesn't. We just try to get our work in."

"It means something to us but,

"It means something to us

A year ago, Felix caused us to panic not a little bit when he didn't quite look like himself early on. Even though he said everything was fine physically, and even though no one expressed public concern, Felix didn't pitch at Felix velocity levels. That picked up over the course of the season, and today, in his first go, Felix threw some sharp stuff and topped out at 92. So, as first outings are concerned, Felix's was a success, and at present we have no reason for worry. It's worth remembering he did just undergo a series of medical exams that would've identified anything that might potentially go wrong soon. So Felix is fine and today he was fine and in the future he should be fine, for a while. I just realized this paragraph is not about celebrating Felix's debut, but rather, celebrating that Felix isn't damaged. Felix threw some pitches in March and he isn't completely fucked! I can't tell if this is a healthy perspective, or the very opposite of that.

As Felix walked off the mound after striking out Mike Moustakas in the bottom of the first, Rick Rizzs said "looks like Felix picks up right where he left off from last year." Last year Felix had a September ERA of nearly 7 and in his last start he allowed a dozen hits. In his last fraction of an inning he allowed four hits to five batters before being replaced by Josh Kinney. I've decided to become an obnoxious, insufferable pedant. This is one resolution I'll keep.

After Felix, Hisashi Iwakuma was good, pitching like his usual self. The other relievers were good too and while Carter Capps allowed a run, that was in part thanks to an error by Casper Wells, who probably wasn't expecting any action at the time what with Brandon Wood at the plate. Mariners pitchers generated eight strikeouts, and issued not one single walk. Capps averaged 96 with his fastball. Tom Wilhelmsen averaged 95. Stephen Pryor averaged 94. Lucas Luetge averaged a number too. I don't think it's fair to say the Royals were no contest to Mariners pitching, but it is fair to say the Royals weren't much of a contest. It's like when you're cutting an apple into slices with a knife. You can't just make an apple turn itself into slices by looking at it, but if you try to slice it, the apple won't put up much of a fight. Mariners pitchers were a sharp knife and the Royals hitters were delicious apples. 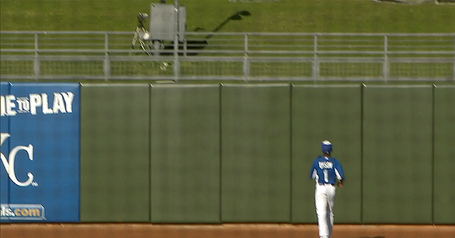 Take it on faith that that's center field and the ball is up on the grass. When he needed three total bases, Romero generated four total bases, so he missed the cycle by unfortunately doing better than the cycle. The Mariners just can't help themselves but mash dingers.

When Romero drilled his grand slam, Rizzs quoted Dave Niehaus, then later said "...and we had a chance to use Dave Niehaus' grand-slam call. Grandma got out the rye bread and mustard and made a sandwich." The whole "grand salami" thing worked because "grand salami" sounds like "grand slam", and it ended the catchphrase emphatically. Niehaus would conclude "it's grand salami time!" It doesn't work so well when you conclude with "sandwich". That makes listeners too aware of the absurdity of connecting grand slams to mustard. Sometimes figures of speech should not be taken to their literal ends.

Of the Mariners' 12 runs, five were scored in one inning against Guillermo Moscoso, and that revenge has been a long time coming. I hold grudges against all the nobodies who shut the Mariners down over the past few seasons, which means I'm currently in possession of an awful lot of grudges. That's why I'm willing to forgive and forget after something as inconsequential as a spring-training game, like today. I had to let go of the Moscoso grudge because the other grudges didn't have enough space and pressure was dangerously elevated. We could've been approaching a VEI 8 grudge eruption.

Adam Moore caught a little bit for the Royals. Adam Moore used to be with the Mariners. Here's Adam Moore realizing these are different Mariners, dinger-hitting Mariners. These aren't the Mariners with whom Adam Moore became familiar. Pity poor Adam Moore, for so many reasons. 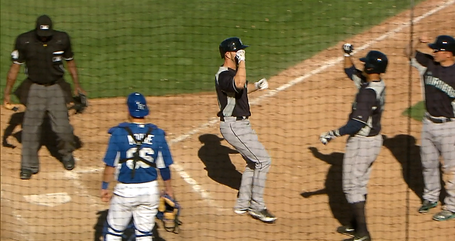 That's Casper Wells, fresh off a dinger. He hit the dinger against somebody, and earlier Wells also ripped a double off the fence. In Wells' six plate appearances, he had two extra-base hits, a walk, and three strikeouts. Given that Wells is out of options, the competition between him and Jason Bay is of particular interest, and I'm rooting for Wells, since I'm unconvinced Bay is actually on the verge of a rebound. If I knew that Bay was actually going to be good again, I'd pull harder for him, since he's nice and he'd also be good again, but Wells is the better bet and he's younger too and he's nice and awesome in his own way. I don't know what Wells has to do to earn a roster spot but today he probably helped his case more than he hurt it. Of course Eric Wedge wasn't there to see Wells perform in person so, oh dear, I hope the coaches talk and don't keep secrets.

Justin Smoak beat the crap out of a double and the doubled scored Kyle Seager. Smoak was batting left-handed. Let's watch Seager score: 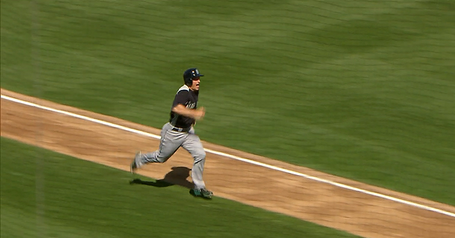 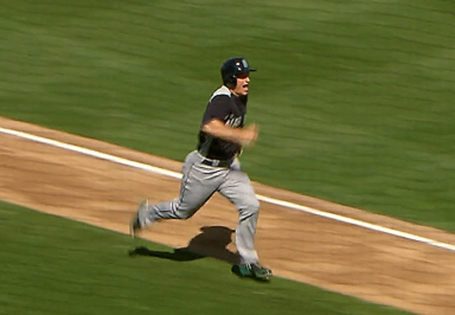 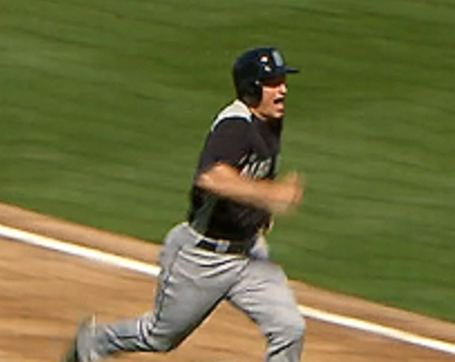 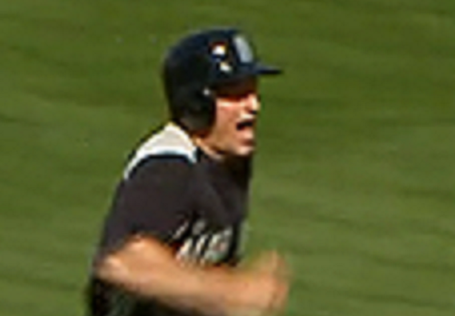 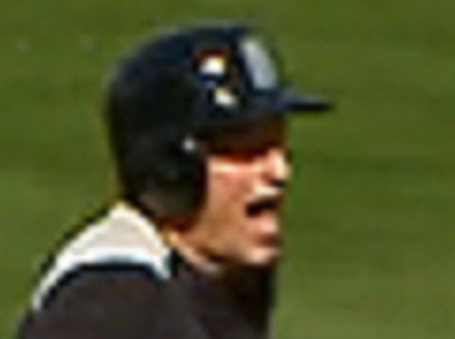 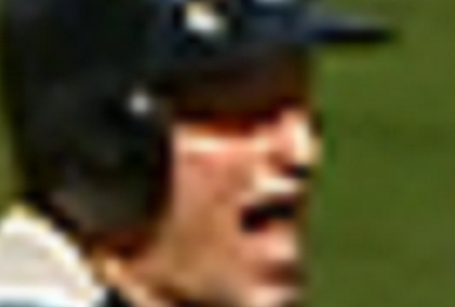 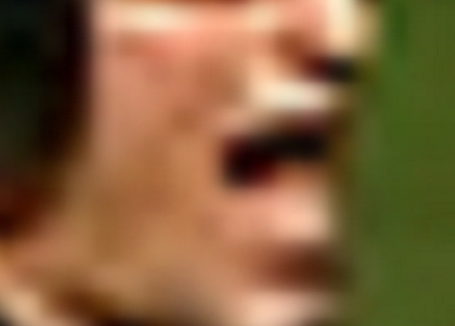 Kyle Seager has a battle cry, and it curdles the blood. I now have an entirely new impression of Kyle Seager.

So the Mariners clobbered the Royals without any show of mercy. The split-squad Mariners, fighting at half strength. The other split-squad Mariners played a game against the Oakland Athletics and Robert Andino mashed a dinger and none of the media was present because the other game had Felix in it. Brandon Maurer pitched well and Jeremy Bonderman pitched well. James Paxton pitched not so well. D.J. Mitchell pitched? I'll draw your attention again to the Andino dinger.