Mariners Rip Off Streak Of Ten Wins In 11 Games

Share All sharing options for: Mariners Rip Off Streak Of Ten Wins In 11 Games

The Seattle Mariners haven't been the Kansas City Royals -- the as-yet undefeated Kansas City Royals -- but so far in the Cactus League, the Mariners have been playing some incredible baseball, always charging forward, unencumbered by the number of marbles acquired along the way. On Wednesday, the Mariners hosted the Milwaukee Brewers in Peoria, and the two teams played to a 7-6 decision. The Mariners have now won ten of their last 11 games since dropping the opener against San Diego, and only the Royals are ahead of them in the standings. No one else is within two games, as the Mariners set their sights on carrying a strong spring over into the regular season, when it will still be spring for a little while.

The Mariners kept alive a streak of hitting multiple dingers, a streak that has grown to such length that I don't remember how long it is. Something like eight or nine games in a row, now, the Mariners have hit at least two dingers, and today's dingers came off the bats of Michael Morse and Kendrys Morales. I might say they came off the bat of Morse and Morales -- I can't confirm from here that Morse and Morales were using different bats. It's the likely assumption, but I don't like to make assumptions about other peoples' business, especially this early in the year when teams and teammates might attempt various methods of bonding. Morse and Morales are newly on the same squadron, and sharing is caring.

Morse mashed his dinger on the first pitch of the bottom of the fourth, against Mike Fiers. Fiers threw a high fastball over the outer half of the plate, but it was also 87 miles per hour, so Fiers' idea of a fastball is Morse's idea of a delicious pizza bagel. Morse hit the crap out of the ball, easily clearing the deep left-center fence with the ball coming down high on the berm beyond. The ball was recovered by someone in attendance, probably, and that person suffered severe burns on his or her hands as a consequence, probably. Michael Morse is going to make for a more interesting Safeco Field beer garden.

Morales mashed his dinger in the bottom of the fifth, against Johnny Hellweg. Morales also got a high outside fastball, and Morales also pulled it, but this fastball came in at 95, so Morales' actions were more impressive than Morse's. Used to be it was impressive if a Mariner just hit a home run. Things were binary; there was either a home run or there was not, so it was either impressive or it was not. Now we're going to have so many dingers we can tier them. The Mariners are going to hit good home runs and pathetic home runs. Of note is that the guard beyond the fence where Morales' ball came down was not expecting a dinger, because he was not paying attention to the baseball game. I don't know to what he was paying attention, but he figured his shit out just in time.

Elsewhere in Mariners offense, Franklin Gutierrez blasted a ringing double that was nearly a dinger. Dustin Ackley came through with an RBI single back to the pitcher somehow. Carlos Peguero had a strikeout o'fer in one plate appearance and Brendan Ryan didn't go 0-for-6. Some Brewers idiot did this as if he doesn't know how to play a baseball game:

Gutierrez also made a fine running catch in the field, ranging to his right in the fifth to take extra bases away from Khris Davis. That's funny because a good written nickname for the other Chris Davis would be Khris Davis. It wouldn't go over so well if spoken. So Gutierrez doubled and played good defense and I don't think it's out of the question that this season he's going to be worth nine or ten WAR. What does Mike Trout have that Franklin Gutierrez doesn't have? Aside from white privilege and probably an off-putting sense of entitlement. The only thing that'll keep Gutierrez from winning the AL MVP is a lack of recognition for his defensive ability. And Felix Hernandez, who will win the AL MVP.

On the mound, Blake Beavan did that thing again where he gets strikeouts. Three of them, he had, in three innings. He came one slider away from striking out the side in the top of the second, but that one slider turned into a two-strike home run. Beavan allowed two home runs, keeping him from developing decompression sickness from rising too fast. The second of those home runs: 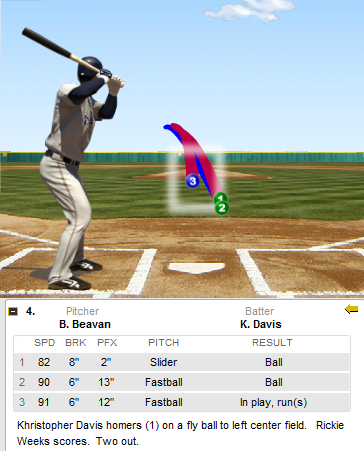 And here's a good example of how pitch framing can make a difference. Either one of those first two pitches could've been called a strike. Both of those first two pitches could've been called strikes. Then Beavan's third pitch is probably different, and not a fastball down the middle of the zone. Giving up the home run is on Beavan, but even though I didn't see video of the first two pitches, some of that is probably on Jesus Montero. If you were wondering whether Montero spent any of the offseason working on becoming a better receiver, like Jose Molina, so much for that. Montero spent the offseason learning how to run. I don't know how you could forget.

But, strikeouts! Beavan now has seven in eight spring innings. Last spring, he had ten strikeouts in 20.2 spring innings. The spring before, he had three in seven. Beavan's working on a new delivery, with emphasis on improving his changeup, and I think if Blake Beavan turns into something of a strikeout pitcher, I'm just going to give up. I'm going to give up on baseball analysis and either turn entirely to baseball commentary or move to the mountains. So long, so long we've spent making fun of Beavan's inability to miss any bats. Players like Beavan aren't allowed to make us look stupid. Players like Beavan aren't allowed to start getting strikeouts, and players like Carlos Peguero aren't allowed to figure out what pitches do.

(Blake Beavan is not going to turn into something of a strikeout pitcher so don't actually worry your pretty little head.)

After Beavan was done, Erasmo Ramirez threw three innings that were better than Beavan's three innings. Twice, he struck out Caleb Gindl, who wound up 0-for-3 with three strikeouts and that misplay above. He also committed a senseless throwing error in the bottom of the fourth. Mercifully, Gindl was removed for a pinch-hitter in the top of the eighth, ending Gindl's afternoon of misery, and the pinch-hitter for Gindl struck out. The next time that pinch-hitter came up, he struck out again. Caleb Gindl's slot in the Brewers' lineup wound up 0-for-5 with five strikeouts and two misplays in the field. That might well end up being the worst combined performance all spring training. And it's all because of the Mariners! And Caleb Gindl, and Caleb Gindl's replacement, who'll remain nameless because there's no point in your trying to learn it.

In further relief, Josh Kinney wasn't very good, and Charlie Furbush gave up a home run. Kameron Loe allowed three baserunners in one inning, but he also generated two strikeouts, and of the players he faced the only one I've heard of is Scooter Gennett, and that's only because his name is Scooter Gennett. So Kameron Loe pitched and things happened and it didn't matter. There are still weeks more of this.

Tomorrow, the Mariners play two games! Half of them face the A's, and half of them face the undefeated Royals, behind Felix Hernandez. Starting for the Royals will be some poor son of a bitch. I hope they've had fun. Really, I mean that. I hope the Royals have had fun playing spring-training baseball. Baseball is supposed to be fun, and it's awful petty to hope for other peoples' unhappiness.