Share All sharing options for: Your Not Obligatory Mariners Spring Training Reminder

And one of those is already taken care of for you! Anyway this is another in a never-ending stream of non-must-read articles on the Internet.

The Mariners have been beating the crap out of the ball and beating the crap out of opponents, by margins like ten, and five, and one. It's certainly been more fun to follow this way than if things were the other way around, because regardless of the significance, success is always better than failure. The Angels are 2-8 and the Reds are 2-11. Both the Angels and the Reds ought to make the playoffs, but right now all those people could feel a little bit more comfortable with the situations.

Everybody's smiling, and everybody's hitting dingers, except for the pitchers, who aren't allowing dingers. Among fans, there's a sense that this new team offense is truly going to click. What does it all mean, though? You've heard it expressed before that spring training doesn't matter. Here's how much spring training doesn't matter. Looking at the Mariners, specifically, what follows is a plot of their regular-season win percentages against their spring-training win percentages from 1996-2012. Why 1996? Because I felt like that was enough years and shut up and mind your own business. Also mind this business: 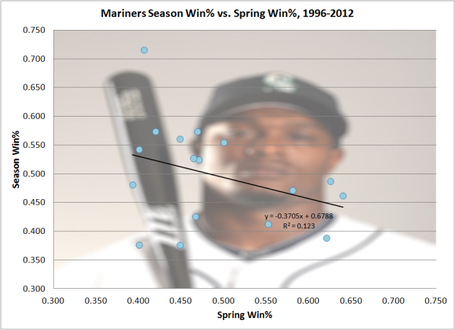 Not only is there not a positive relationship between spring success and regular-season success -- we actually observe the very opposite! There's a negative relationship! Right now, the Mariners are 10-1. If we plug that winning percentage into the equation, we get a projected regular-season winning percentage of .342. At this rate, the Mariners are going to finish 55-107. Oh dear.

Of course, given a choice between a team playing well and a team playing poorly, you'd prefer the former. And of course, it's about more than team-level success. Teams in spring training are driven by players in spring training, and maybe in the spring you can see signs of a player about to break through, or a player on the rebound. A hot prospect who bats .400 in March will have done better than a similar prospect who bats .150 in March, and you want the players to excel. It's all still baseball, after all, right? With real-live pitched balls and ordinary rules?

But I don't think it can be repeated enough that this information might as well be non-information. People are enchanted by it now, because it's all the information we have, but that doesn't make it matter. Last season's information matters more. So, so much more. If you want to know what a player's likely to do this coming season, consider what he did in his most recent season. There can be signal within the spring-training noise, but you better be damn sure you're spotting it when you try to spot it. With Michael Saunders a year ago, we saw evidence he was covering the outer half of the plate. That was new, and it seemed to be important. New skills are of note, but new skills are hard to spot, because they're infrequently on display.

The Mariners are clubbing the snot out of the ball. It's been fun to follow along, because that's so unlike the recent editions of the Mariners. It certainly can't hurt to have fans and players feeling more positive as the regular season approaches. But the regular season is a different season, more closely related to the previous season than to the preceding spring training. Have fun in spring, but be responsible. Don't be a college freshman, just learning how to drink. Be a college senior and make sure that when you drink too much, it isn't by accident.