Share All sharing options for: Mariners Give Opponents "Rocky" Afternoon

I went on a jog this afternoon, after finishing my posts for FanGraphs. This has been one of those weird and unfortunately infrequent days where all I really want to do is exercise, but more importantly, this was also just a beautiful day in Portland, Oregon. When you have days like this, in February and March, you have to find a way to take advantage of them. I hit publish, I closed my computer, I grabbed my iPod, and I took off, out the door and up a road that climbs a hill overlooking the northwest quarter of the city.

The road's a residential one, the houses becoming more expensive by the plot. I intended just to get myself outside in the light, and I didn't think about the view I'd have until the view punched me in the neck. At a bend on Cornell, there's a gap between homes, and to the northeast, I spotted the gleaming Mt. Adams, looming behind the Silver Star pluton that normally hides it from sight. Directly east, there stood Mt. Hood, not an unusual sight but today seeming unusually close. Due north, there was the broken St. Helens, the white of the snowcover lending beauty to the wretched. And just to the left of St. Helens, low and partially hidden by the mountain's western flanks, there was another ice-capped peak.

Initially, I thought it a ridge I simply hadn't spied before. But then, I've spied all these ridges, and I recognized the profile. This was not a St. Helens foothill. This was Rainier, towering in the distance but vivid on the horizon. Mt. Rainier brings to mind a lot of things, but most notably to me, Mt. Rainier brings to mind Seattle. And that's when I realized, were the Mariners playing on a south-facing field near the volcano's base, any one of their hitters would be able to knock me in the head with a dinger. I gasped at the thought and, though I knew myself to be in no real danger -- the Mariners today were playing in Arizona -- I kept my eyes on the sky and took care to complete my jog unconcussed. These Mariners have the raw power to change lives, but not all of them necessarily for the better. When it comes time for them to return to Safeco, you can't afford to let your guard down. Not even for an instant. Not when it's the Mariners batting.

The Mariners have so many marbles now they're having to keep them in Robert Andino's locker. But the Mariners forgot that Robert Andino is on them and when he opened his locker to change all the marbles spilled out and he fell and twisted his ankle. When Andino went to the trainer for help Rick Griffin responded "I'm sorry but who are you?" but Griffin saw to wrapping Andino's ankle anyway out of the good of his heart. Someone else had to pick up all the marbles, and he put them back in Andino's locker. 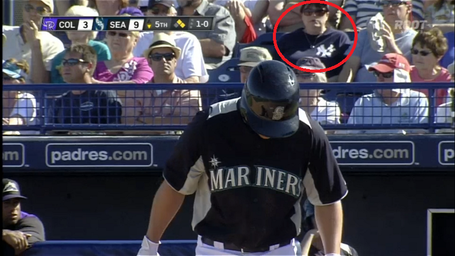 The Mariners are so dominant they have more high-fives in the dugout than they know what to do with:

Today, the Mariners scored 16 runs in eight innings against Colorado pitching. How did the Mariners score 16 runs in eight innings? Raul Ibanez ripped one dinger, off Juan Nicasio. Kyle Seager ripped another dinger, off Parker Frazier, who visuals indicate is 12. Eric Thames doubled twice. Kelly Shoppach drove in three runs somehow. Casper Wells singled and doubled and tripled, which would feel more meaningful and important if Carlos Peguero weren't also lighting the baseball on fire and lighting the outfield fences on fire too. Peguero knocked himself a deep double, the other way, and the Mariners just kind of beat the crap out of dudes. Miguel Batista, who pitched, was charged with six runs in one inning of relief, although all six of the runs were unearned and therefore none of the six runs were technically Batista's fault, which he probably mentioned to teammates later, because I'm assuming Miguel Batista is a douche in that way. 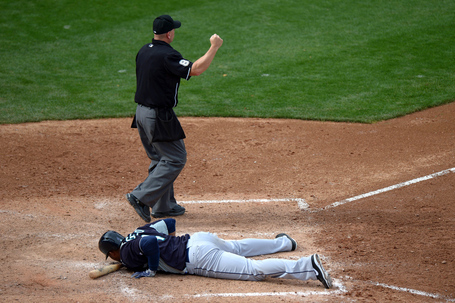 Anyway, it's definitely more good than bad that Peguero, Wells, and Jason Bay are performing. Nobody wants players to go to spring training and suck. It might seem like this is shaping up to be a difficult roster decision, but there are still several more weeks of this, so things will shake out and the decision probably won't be that hard after all. Peguero can go back to the minors, so, look, I just solved that. Bay is probably bad, so, look, I probably just solved that too. But I guess I'm not a decision-maker. I'm not the Mariners' decision-maker. I do make decisions though.

On the mound for the Mariners, Jon Garland did that thing again where he allows baserunners but none of them cross the plate. I can't see that ever breaking in the other direction. After Garland was Taijuan Walker, and Walker didn't have a great outing, putting several guys on base in two innings. Walker generated just one swing and miss and he didn't seem to have a feel for his secondary stuff. If only Walker weren't just 20 years old with limited experience in the high minors. Oh wait, that's exactly him. Walker threw three curves and all of them missed the zone glove-side, although one was in an 0-and-2 count, and we're talking about three curves. Don't evaluate based on three curves. As a rule of thumb, don't evaluate based on three anything.

Stephen Pryor struggled a bit in his inning of relief, giving up an infield single and a dinger. I don't hold the infield single against him, but there was that dinger. Pryor is trying to figure out how to throw a changeup or a curveball, to give himself something slow. At this point he's just trying to throw those pitches for strikes, and this afternoon he threw two curves. Here's one of them:

Here's the other one of them:

So that could've gone better and worse. Right now I expect that Pryor will open the season in the minors with Carter Capps and Kameron Loe sticking, but there's a lot of time left to go, so Pryor might get a slow pitch nailed down, or he might hit Capps or Loe with an errant curveball.

Another win for the Mariners, as they head into a Tuesday matchup against...nobody? An off day in spring training? I don't think I like what this might do to the Mariners' momentum. They should probably just show up at some ballpark. "Do you really want to play those guys, or do you want to try and beat us?"