How have expectations changed for the Oakland A's following a surprise division title in 2012?

The Oakland Athletics hold their fourth-annual Lowering Offensive Expectations Day with Special Guest Felix Hernandez. To help us kick off the Opening Series, Beaneball's Jason Wojciechowski has answered a few questions about the 2013 A's.

Jon: The three way trade that sent Michael Morse from the Washington Nationals to the Seattle Mariners, John Jaso from the Mariners to Oakland A's, and prospects from the A's to the Nationals received mixed reviews on the Mariners' side of things. Break the trade down from the Athletics' perspective. 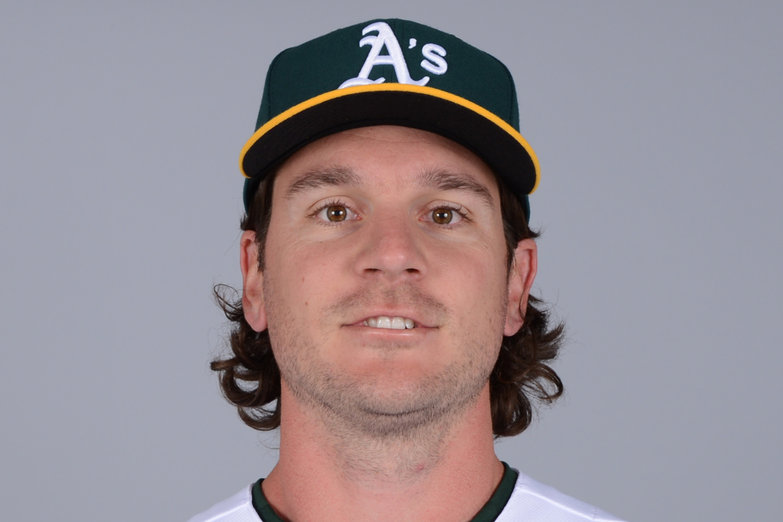 John Jaso has been unbearded.

Jason: The A's gave up three pitching prospects in the Jaso trade. A.J. Cole originally came to Oakland in the Gio Gonzalez trade with Washington. He struggled in the Cal League in 2012 but pitched very well after a demotion to the Midwest League. He's still only 21, so even after the demotion, he was appropriately aged for the league. His fastball is impressive and if his secondary pitches come through, he'll be an excellent major leaguer. Giving up a pitcher with his ceiling was certainly a blow to the A's minor league system.

Blake Treinen was a college seventh rounder in 2011 who has put up impressive peripherals, but he's already 25 and hasn't pitched at Double-A yet. He could be something, he could be nothing. Finally, Ian Krol was a high school seventh rounder in 2009 who pitched mostly in the Cal League in 2012 before a late-season promotion to Double-A despite a 5.21 ERA at A-ball. He's still only 22, and he was a prospect once upon a time, but missing almost all of 2011 (part injury, part suspension for a tweet that include a gay slur) hasn't helped. Neither Krol nor Treinen ranked in Baseball America's Top 30 for the A's in the 2013 Prospect Handbook.

The trade, from my perspective, is fair. The A's got three years of a high-OBP catcher with power potential for a good prospect who is at least two years away and two random live arms. Cole could turn into something very good, but he probably isn't great, and the upside for Treinen and Krol is probably "useful."

Jon: Now that you've had a Spring Training to get a better idea of what Japanese import Hiroyuki Nakajima is all about, how has your opinion of him changed since his signing? How confident are you that he'll stick as an everyday Major League shortstop?

Jason: Personally, I'm not a big Spring Training watcher, but the reports I've read out of camp have not been glowing. Everyone seems to like Nakajima as a person and think that he has what it takes mentally to make the adjustments, but even before the spring, [A's infield coach] Mike Gallego referred to Nakajima's arm as "fringe-average." If he can hit, the A's can afford a below-average defender (the starting rotation should fall somewhere between average and below-average in terms of inducing ground balls, so the relative value of infield defense may be a little lower on the margins in Oakland than on other teams). As to whether he can hit ... who knows. He didn't in the spring, but the next 46-at-bat spring sample that's meaningful will be the first. (For now, by the way, he's on the disabled list with a hamstring injury and he may start the year in Sacramento even after his rehab stint.)

Jon: Jed Lowrie was brought over from the now-rival Houston Astros in a deal that exported slugger Chris Carter and prospects. Where does Lowrie fit into Oakland's infield? Will Carter be missed? 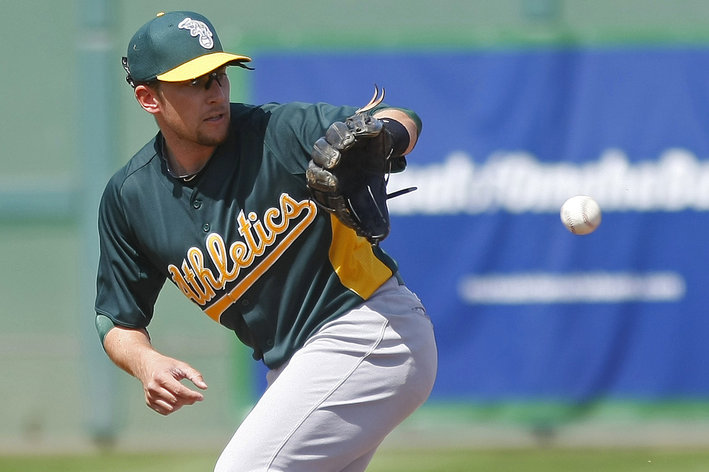 Jason: As a fan, I'll miss Carter tremendously. His placid demeanor and whiff-oriented ways might rub some people the wrong way, but I always thought they made for an interesting aesthetic complement to the moon shots he'd unleash from time to time. Houston's going to try him in the outfield, which, well, I've seen him in the outfield, and all I can tell any Astros fans who happen across this is, "I'm sorry." For the team, though, Carter's marginal even at first base, and the A's scouts may well have seen something in his swing that they thought would be easily exploited over the long run by major-league pitchers such that he'd wind up as merely a decent hitter with bad defense. If that's what they thought they had, then you can see the trade as selling high after he put up a .350 OBP and .514 SLG in 260 plate appearances last year.

Lowrie was acquired with the idea of being a superutility player who'd get time at all four infield positions. I can't say how super, exactly -- four starts a week? Five? Six? But the idea was that he'd be a regular of some sort, but not at any given spot. With the injury to/struggles by Nakajima, however, Lowrie is the A's best shortstop candidate, so that's probably his role for now. (When utility man Adam Rosales comes back from his own injury, the situation could change again.)

Jon: What's the next step for Yoenis Cespedes?

Jason: Cespedes has to stay healthy. Baseball Prospectus's WARP says he was worth 4.7 wins above replacement last year, 25th among all position players. Of the players who ranked ahead of him in WARP, however, just two had fewer plate appearances (Joey Votto and Carlos Ruiz). At his rate of production, if he'd batted 697 times (the number of PAs registered by Miguel Cabrera and Robinson Cano), he would have ranked ninth in WARP.

That's just a way of illustrating how tremendously excellent Cespedes was in 2012 and how he can take exactly zero steps forward in 2013 in terms of offense or defense but still be a legitimate superstar instead of the mere star that he already is. Bob Melvin has said that Cespedes will serve as the designated hitter more often this year in an effort to give him the old "half day off" and keep him from getting banged up.

Jon: The A's maxed out much of their roster to enable their surprise run to a division crown in 2012. Which players (if any) are you expecting to falter in 2013 after providing big contributions last season?

The most obvious negative regression candidate is Brandon Moss, who hit an astounding .291/.358/.596 in 296 plate appearances as a platoon player (he batted just 62 times against lefties). Moss was a halfway decent prospect once upon a time, but his career high for slugging even in the minors prior to 2012 was .528. Players change their swings and approaches and have success sometimes (see Jose Bautista) but the better bet is that, even to the extent the performance was "real," the league will figure out what he was doing and counteract it in 2013.

I have a hard time believing in Ryan Cook's 2.09 ERA largely in late-game setup work because he never seems to know where the ball is going. Maybe he's effectively wild, but maybe hitters will just stop swinging. A.J. Griffin, meanwhile, put up a 3.06 ERA in 15 starts without the least hint of stuff. Pitchers can succeed without stuff, especially in front of the A's outfield defense and in that park, but there's a difference between "succeeding" and "posting the same ERA as Cole Hamels."

It's worth noting that two other key players who maxed out in 2012 were Jonny Gomes (.262/.377/.491) and Travis Blackley (an out-of-nowhere bacon-saving 3.86 ERA in 102 2/3 innings), neither of whom is with the team any longer, the former having signed a free-agent deal with Boston and the latter having been designated for assignment just a few days ago.

Jon: Discuss one young player you're looking forward to watching in 2013. 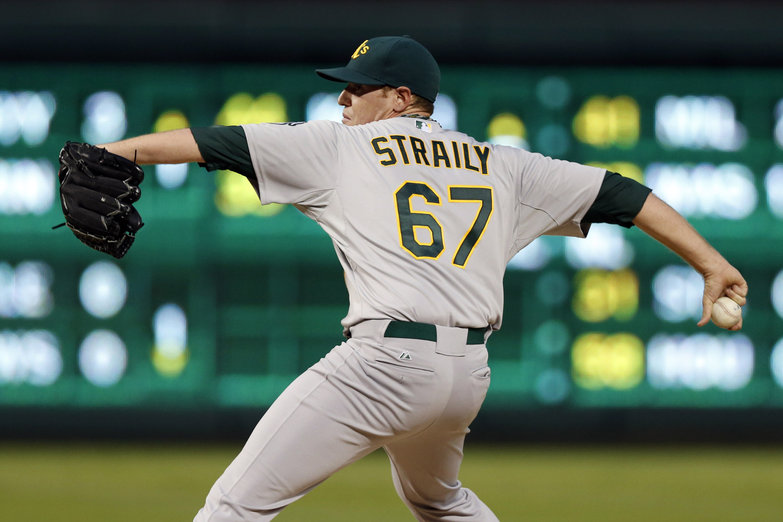 Jason: Dan Straily will be the first starting pitcher up from Sacramento in case of injury or Bartolo Colon getting caught with more drugs, and I'm excited to see how his four-pitch arsenal, command, and advanced pitch-sequencing play over the long haul in the majors after he put up flat-out absurd strikeout numbers in 2012.

Let me also put in one brief plug for Nate Freiman, a right-handed first baseman who the Astros took in the Rule 5 draft from the Padres before waiving him late in the spring. The A's put in a claim and he's made the roster in a platoon role. As you know, Rule 5 picks have to stay on the 25-man all year. I could say this or that about Freiman's ability and numbers, but none of that is important. What's important is that he's 6'8" and at least 250 pounds and I've always found monstrously large baseball players to be hilarious. As a fan of the A's, I hope he hits enough to contribute. As a fan of baseball, I hope he hits enough to stay on the roster and thus on my TV.