Justin Verlander, Felix Hernandez, and How Far This Will Go

Justin Verlander has a new contract to become the latest highest paid pitcher in baseball history. How much risk does it carry compared to the King's, and how crazy are the Tigers?

Share All sharing options for: Justin Verlander, Felix Hernandez, and How Far This Will Go

Felix Hernandez got to enjoy being the highest paid pitcher in baseball history for a grand total of six weeks until it was topped by another. $175 million was a tremendous risk, but one that the Mariners had to take. The Tigers have taken an even bigger risk by signing Justin Verlander to a contract worth more than the city of Detroit. Verlander's new $180 million contract tops Felix's deal by a Batmobile.

Verlander is 30 and Felix is 27 (soon). Both have a similar amount of innings thrown in their major league careers, but Felix is still approaching his physical prime as Verlander nears his end. In 2010, Michael Lichtman conducted research on how pitchers age, and presented the following:

The Mariners have three seasons remaining on Felix's new deal until he hits that 29 year mark. The Tigers have committed seven additional years to Verlander, and have none.

There is of course more to a pitcher's career path than age, and while Felix has demonstrated a sharper drop in velocity, Verlander's is more subtle. Bill Petti investigated this at Fangraphs last month and concluded the following:

Is Felix’s velocity decline troubling? Yes, given what we know about aging and velocity trends. But since Felix does not rely on his four-seamer as his primary pitch, the decline need not be as concerning as if it was happening to a different pitcher. Moreover, that Felix’s in-season velocity trend once again resembled a normal trend is a good sign. This year could be a critical one to determining how this extension will play out. If Felix can hold the line on his sinker’s velocity, it bodes well for his continued dominance.

Verlander has exhibited gradual declining fastball velocity over the past 4 years, and while it is still his most dominantly used pitch by a large margin, usage has decreased over time. 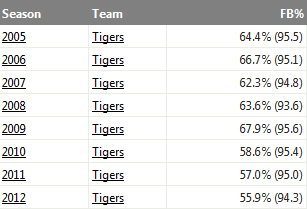 The important distinction between the two pitcher's fastball usage is mentioned by Petti. Verlander relies heavily on his 4-seam fastball, and Felix uses it more selectively, especially to open at-bats. You can see the difference here, thanks to Brooks Baseball. 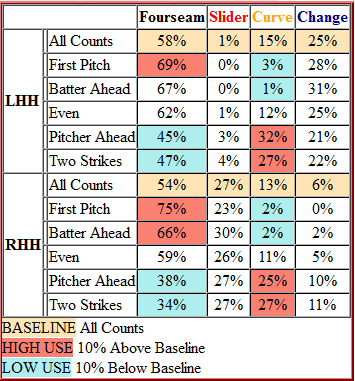 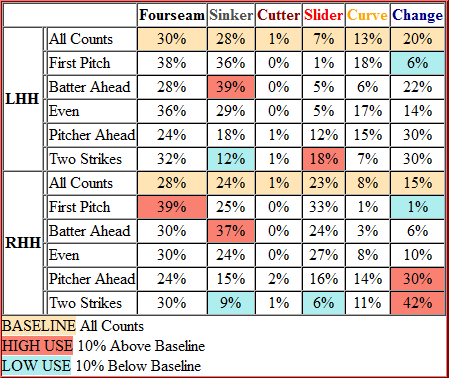 As Petti hypothesized, Felix's drop in decline is less concerning because of his limited 4-seam fastball usage. That isn't the case for Verlander, who throws a 4-seamer as his sole fastball and his primary pitch. Now that slow drop in decline starts to look quite a bit more concerning.

There's no question in my mind that this Verlander extension carries quite a bit more risk than the Felix extension that raised some eyebrows. Ken Rosenthal questioned the Felix move and saw it as too large of a risk. He suggested the Mariners should have traded him instead, because that's just what Ken Rosenthal does when it comes to Felix, even after they sign him for 7 years. We're now likely to hear a great deal of praise for the Tigers going "all-in" and "betting on the best."

The Tigers now have over $90 million committed to just 4 players in 2015 (Fielder, Cabrera, Sanchez, Verlander), and carry tremendous inflated contract risk going forward. The city of Detroit is mired in massive financial crisis, so that carries over to the Tigers too, right? Maybe when the bailout comes to Detroit the team can default on all of their owned money after 2015.

The Tigers simply saw the writing on the wall for what's about to come. Verlander is the third ace to sign a major extension this spring, as Adam Wainwright just polished up a $97.5 million deal a few days ago. Felix's deal surely laid the groundwork for Verlander's deal, and had they waited to get something done with Verlander, his price may have been even higher, as Clayton Kershaw is due for a massive extension next.

Verlander better enjoy his equally short time as the highest paid pitcher in baseball history, because Kershaw seems likely to be the first $200 million pitcher soon. Kershaw turned 25 this month, plays for the newly richest organization in baseball, and now has dual precedent and the ability to leverage the most expensive contract in baseball history, given his pedigree and age.

But where does it end? Verlander and Felix are 3+ years apart in age, and just commanded close to the same deal. Kershaw could easily ask for an 8th year in his new contract, and push the total value upwards of $200 million. He very well may get it. Somebody else will come along to ask for even more. Eventually, the bubble will pop.

It's interesting that the Verlander extension comes on the same day that Johan Santana's career with the Mets probably ended, in the last year of a 6 year, $137.5 million deal signed in 2008. Santana will have started just 21 total games over the last 3 years of the deal. Before the Mets deal, Santana had thrown at least 219 innings in 5 straight years and was one of the most reliable and healthy starters in baseball.

Santana signed his new deal when he was 29. It was for 6 years.

This is a contract that is nearly certain to be an albatross towards the end. There's very little chance that Justin Verlander is going to provide the type of production at ages 35-36 that justifies the money he'll get. If he ever sees a sharp drop in velocity like Felix did, he may not be able to recover, and this could blow up faster than expected. There's also virtually no chance Prince Fielder is going to provide anywhere near the production his salary justifies when he's 33-35. It's going to major problem for them.

But Tigers owner Mike Ilitch doesn't care. When Justin Verlander is in the final year of his contract, Ilitch will be 91 years old. He's already given out one crazy, fool-hardy contract, so what's another one with tremendous risk? He wants a ring. Maybe he wants two with his two behemoth contracts. It seems to be his style. Ilitch founded Little Caesars, and his net worth is an estimated $2.7 billion. Now he's the proud owner of two gargantuan contracts that have a strong probability of eventually becoming a disaster.