What Needs To Go Right

The Seattle Mariners should win between 65 and 73 games according to most cited projection systems.

Share All sharing options for: What Needs To Go Right

According to Zips and Cairo and everything else that I've seen that uses math and lacks emotion, the Mariners aren't projected to be a very good team. But it's just a few days before the regular season and that's just a big old wet blanket on any amount of optimism that may or may not be warranted. Even if your cold rational stare were to accept the true-talent level of this squad puts them somewhere in the 70-win range, you have to at least wonder what kind of improvements would be necessary to elevate this team into relevance. Or at least I wonder.

Jeff did a fine post back in January that referenced some of the earlier projections, but now that we know quite a bit more about the state of the roster, things have changed a tad. Since then, the Mariners have given us Joe Saunders. They've given us Brandon Maurer. They've given us this:

We also know that Baseball is an imperfect game to predict, with recent examples being the the A's and Orioles. Or the 2009 Seattle Mariners. Even that Cairo projection system (if you look at the W+/-) puts the Mariners projected wins somewhere between 61-84 in context of a single standard deviation. That's a huge range. Sometimes you swing as hard as you can and the ball bounces off home plate straight up in the air and as Rick Rizzs would say, "it's a line drive in the book." Or rather, "IT'S A LINE DRIVE IN THE BOOK!"

To that end, what exactly would need to go right for the Mariners to sniff contention in 2013?

Let's take the ZiPS projection for the starting rotation:

Yeeks. The projection likes Felix a good deal, and we should be happy with a 6 win season. The club is going to need Iwakuma to not only throw more than 128 innings, but post something a little closer to 2.5 to 3 WAR. Iwakuma was misused last year, as we all know. He started the season in the bullpen for whatever reason and was terrible. When they let him start games, he was very good. In his 16 starts, Iwakuma posted a 2.65 ERA (3.91 FIP), 1.23 WHIP, striking out 20% of opposing batters and walking just 7%. As a reliever, he had a 5.73 FIP. We need him to be the former. And if he can give the team 180 healthy innings, I think there's good reason for optimism there.

The Joe Saunders move improved the team by about two wins as soon as he signed his name. Because Joe Saunders in meant Hector Noesi out and since Noesi projected as a -1 WAR pitcher, well, yay math. Now, Saunders has been terrible this spring, but surprise -- Joe Saunders is terrible every spring. He has a 11.57 ERA so far this spring with a 2.23 WHIP. He had a 7.98 ERA and 2.11 WHIP last year. The year before it was 12.46 and 2.31. In his career, when he's pitched anywhere near a full season, Saunders has been roughly a 1 to 2 win pitcher. Last year, he was at 2.4. Moving to a bigger park for a guy that has historically had some trouble with home runs ought to help, and maybe, just maybe we can squeeze a 2 win season out of him. Maybe.

An Introduction to Brandon Maurer 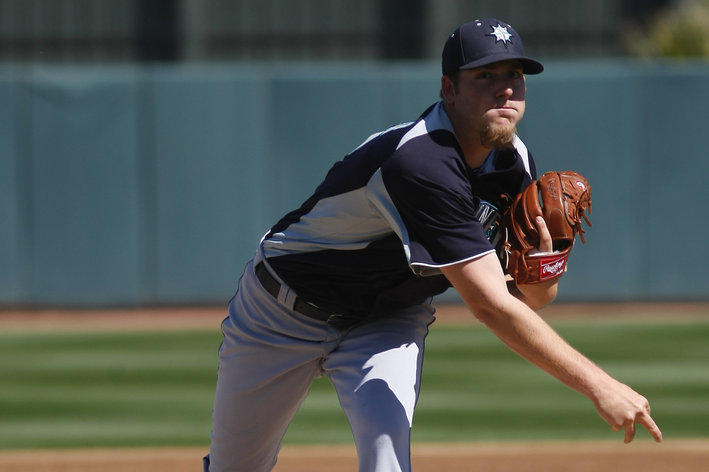 The projection for Beavan actually strikes me as wildly optimistic, so let's just not bother it and walk away slowly. Maurer, however, we should have higher hopes for. At least I have higher hopes for him. The projection was made before anyone really had a clue that he was going to win a spot in the rotation, so at a minimum the innings increase impacts his value. And if Bruce Chen can register 1.8 WAR with a 5.07 ERA, 4.73 FIP and a 6.57 K/9 -- well, so can Maurer. If you can't say your pitchers are at least as good as Bruce Chen, well, your pitchers suck. I have to believe that Maurer can give us a 1.5 win season, otherwise, what the hell kind of fan am I?

Moving to the position players, ZiPS thinks enough of Ackley's defense and Kyle Seager's bat to make them interesting, but other than that it's kind of depressing. Edit, it's entirely depressing. And I just won't stand for it. This is where things need to go right. There's certainly room for improvement in the starting rotation, but here's where the Mariners can make some headway:

Ackley at 2.8 WAR we should all be thrilled about, frankly. He certainly seems capable of it given the 2.9 win season he had as a rookie in just 90 games, but coming off his 2012 stinker, it's a little surprising to see a projection system that's usually pretty conservative seem so bullish. But Ackley did just turn 25, so his best years ought to be ahead of him, and I'll share a little nugget that Mike Newman (prospecty dude from Fangraphs, other stuff at rotoscouting.com and all around good guy) shared with me down in Phoenix: apparently that ankle surgery he had in the off season was an injury he dealt with quite literally all season long. I'm not nearly piped into the Matrix enough to know if this had direct implications on his swing, but I trust Newman, and he said it did. So there's that. Let's go with 3 WAR.

After a 3.6 win rookie campaign, ZiPS sees a regression in defense and a 2.2 WAR total for Kyle Seager. If the Mariners are going to be competitive, this has to improve. ZiPS is the most bearish projection system for Seager out there, for better or worse, and I'm not sure there's too much in his 2012 profile that would suggest he can't repeat the offensive output from last season. His ISO wasn't astronomical at .163, and seems pretty in line with what he did in the minors (and in fact, quite a bit lower than his .198 in AAA) and his .286 BABIP is right in line with his expected BABIP based on his hit trajectory (coming in around .291). Maybe he doesn't hit 20 home runs, fine -- but I'm not sure why there's reason for pessimism with his defense, and damnit, I'm just going to pencil him in for another 3.6 win season. Sue me.

Brendan Ryan. I don't know, what else can you say other than he just can't be this bad with the stick again, right? 1.4 WAR in 2012, he's just 31, plays silly-good defense, and has two nearly three win seasons in his back pocket. I'm making the call for a .240/.320/.330 kind of year and typical wizardry with the glove to the tune of about 2.5 WAR. Why not. Brendan Ryan is awesome.

Montero is projected at 1.9 by ZiPS, and that's probably not so awful. But, again, if we're talking about things that need to go right, that's going to need to look a little more like 2.5 in order to contribute to a successful season. That probably looks like a .275/20/75/80 kind of year with passable defense behind the dish when he's there. It's not asking the moon, but maybe it's asking for some kind of celestial body, I don't know.

In the outfield, we should just pray that Michael Saunders can do what he did last year -- which ZiPS isn't even buying. I know the popular opinion is he's a player on the rise, but .247/.306/.432 really isn't anything to get your undergarments in an uncomfortable position over -- and there's the whole specter of his miserable offensive showing until 2012. ZiPS says 1.0 WAR. I say we need his 2.1 from 2012. Okay, Michael?

Guti? Well, just hit .250 with 12 home runs and toss in some stolen bases and stay healthy. That's basically all he needs. If he can give the club 130 healthy games with the signature goofball defense, he's a 3 win center fielder. But as Patrick Dubuque might posit, Franklin Gutierrez is likely to fall down an elevator shaft at any given moment.

Michael Morse looked like Micky Mantle this Spring with his nine home runs, the majority of which appeared to travel two football stadiums. Enough has been written about Morse and his injuries and his defense that I don't need to rehash it here, now that I'm up to damn near 1500 words talking about my prayers to the baseball Gods to make my Mariners interesting this year. Morse stays healthy all year and hits like it's 2011, well, Yahtzee. He can lumber around left field like he's Samwell Tarly chasing a prostitute all he wants but if he can stay on the field and hit, he ought to outproduce that 0.4 win projection. Potentially by a significant amount. I'm saying 2.0. Yes, Mike Morse, 2.0 where we see more of this:

And less of this:

Then there's the plural Kendrys. The guy hit the snot out of the ball in 2009, broke his leg in one of the funnier ways to break a leg if you're not a LosAngels fan, and he's paid for it ever since. In an earlier post here at Lookout Landing, I made the observation that Morales was still complaining about his leg at the start of 2012 and then proceeded to (seemingly) get stronger as the season wore on. His ISO and slugging percentage trended upward as the Summer passed -- his first half ISO was .142 and his second half was .248. When he hit 34 home runs in 2009, his ISO was .263. Could it be that he finally had his strength back? I'm calling for 1.5 WAR here.

I'm going to skip the bullpen and Kelly Shoppach, Jason Bay, and Raul Ibanez. And the reserves. Even rose colored glasses can't do much to improve the projections there.

So if we take the irrationally hopeful wins above replacement (IHWAR, if you will) and juxtapose them with the projection, where does that leave us?

If the moons align and everything, everything goes right, the Mariners pick up another 13 wins or so. If we take perhaps the most optimistic projection of 75 wins and add to that, then we have an 88 win team and the Mariners are probably knocking on the door of that second wildcard slot. At a minimum, they'd keep things interesting into September -- and really, we should all be so lucky.

Hope has a way of inducing amnesia.