The Mariners' Bullpen and Specialization

The 2013 Seattle Mariners bullpen has an unusual number of specialists, and on its face this seems like a thing that might work out quite well. What do the numbers say?

Share All sharing options for: The Mariners' Bullpen and Specialization

In the last calendar year, the Mariners have traded three relievers: Brandon League, Shawn Kelley, and Steve Delabar. League was excised from the roster because he was a closer and also terrible, so that doesn't really fit with the narrative here, but I'm a sportswriter now so I feel entirely justified in ignoring data points because they don't fit with my narratives.

Anyways. Kelley and Delabar are the subjects of interest here. The Mariners never really seemed to like either of them, demoting them more often than they demoted other relievers and ultimately trading them for less-than-stellar returns. The thing is, though, based on strikeouts and walks alone these guys were pretty darn competent. Looking only at those two aspects of pitching, Kelley should've been the Mariners' right-handed setup man this year, not the first one cut. We all remember how good Delabar was at striking dudes out (in case you missed it, last year in Toronto he got four strikeouts in one inning). So what gives? Why didn't the Mariners like these guys?

Well, for one thing, there was the matter of their home runs. Kelley was famously demoted last year after hanging one slider to Yoenis Cespedes, and Delabar's homer-proneness is the stuff of legend. But if the Mariners really got rid of two relievers because of their perceived gopherballing tendencies, the moves were impulsive and foolish: reliever home runs are notoriously fickle and take far longer to stabilize than the amount of time the Mariners gave Kelley and Delabar. I also find it hard to believe that they would dump Shawn Kelley because he gave up a lot of home runs last year and then immediately replace him with Kameron Loe, who gave up even more home runs last year. Maybe they didn't like Kelley and Delabar because of their inconsistent offspeed offerings; Kelley's slider often hung up and Delabar really just had no idea where his gyroball/splitter/elbow-destroyer thing was going.

But I'm going somewhere else with this. Check out the 2010-2012 wOBA splits by handedness for the current Mariners relief corps, plus Kelley, Delabar, and League. Something jumps out immediately. 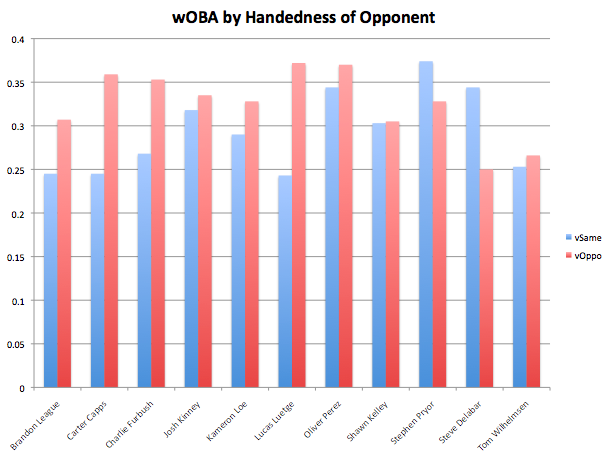 Delabar, Kelley, and Stephen Pryor are the only three members of this group with nonstandard platoon splits. Actually, most of the rest of the relievers here have enormous splits. We can probably toss out the data for Pryor and Capps due to sample size concerns, and Lucas Luetge's true split is probably not as enormous as it looks on this chart, but still. Wow. That's a whole lotta split.

Remember last year, when Eric Wedge would sometimes hold John Jaso in reserve late in games even when pinch-hitting was the obvious course of action because he was afraid the opposing team would send in a LOOGY to neutralize him? I absolutely hated it, but it revealed a potentially important thing: Wedge puts a lot of stock into reliever platoon splits. Enough stock to keep his best hitter on the bench late in ballgames because he's worried about being on the wrong side of one.

Somewhat suspiciously, less than one year after we discovered Wedge's fear of platoon specialists, the Mariners have built a bullpen filled with platoon specialists. Tom Wilhelmsen is an exception, because ridiculously good curveballs work on everyone, but he's the closer. Capps and Pryor are more "haha you can't hit my stuff" relievers than platoon specialists, but there's basically no data about their platoon splits so we'll have to ignore them for now. As for the rest of this year's bullpen, taking wOBA vs. opposite-handed hitters and subtracting wOBA vs. same-handed hitters yields the following:

Even accounting for regression to the mean, the Mariners appear to have constructed a bullpen with well above-average platoon splits. One can see how this could be a good thing if managed well. One can also see how it could be disastrous if managed poorly. Lucas Luetge went 16 2/3 innings without allowing a run last year, facing almost exclusively lefties, but when Wedge started using him for full innings things went downhill very quickly.

So I got to thinking. Is it actually a good idea to fill up your bullpen with specialists? From a strategy standpoint, it makes sense: have your starter go six innings, then have four or five specialists available through innings seven and eight, then use the closer in the ninth. Tony LaRussa is famous for using this kind of bullpen, even though he actually didn't. Jim Leyland is famous for arranging his lineups in L/R/L/R alternating fashion to guard against this kind of bullpen. Are bullpens that use more specialists more effective?

It's kind of a tricky question to answer, because most baseball databases don't carry "vSame" and "vOppo", the two haves of the wOBA split I came up with to evaluate the Mariners' pen. Fangraphs' Eno Sarris took a stab last year, ranking teams by LvL and RvR batters faced, but that runs into the issue of separating starter performance from relief performance. He also tried to rank teams by batters faced per relief appearance, positing that lower numbers would mean a more specialist-heavy bullpen, but that also feels the effects of the rotation because the more innings starters can go the fewer innings relievers have to. The article also doesn't comment on correlation between specialist use and success, which I'm trying to do here, so clearly we need to expand our aims a bit.

I went a step further, getting every 2012 reliever's number of plate appearances versus left-handed and right-handed opponents and sticking those numbers into Excel. It was a time-consuming pain in the butt (I had to manually identify the handedness of 660 pitchers, then go through the list and manually excise all of the starters, then split the plate appearances of traded players between their two teams depending on the date of the trade), and as a result I was only able to get data for the 2012 season, but you can see my enormous spreadsheet here.

I also sort of made up three statistics: RvR%, which is the percentage of a bullpen's plate appearances that are righty-on-righty, LvL%, which is the same except for lefties, and ADV%, which is the sum of the two. I took ADV% and plotted it against xFIP (because screw trusting reliever home runs) and xRA (as a nod to LL history). You can see the plots below. 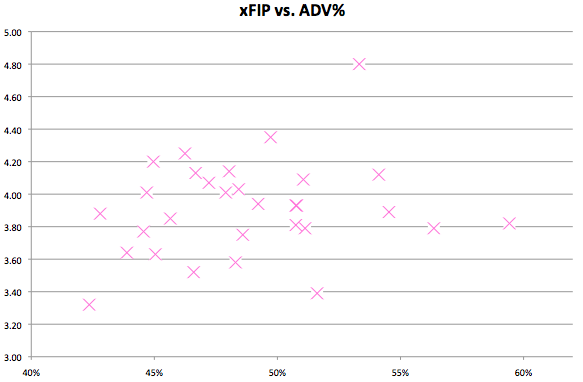 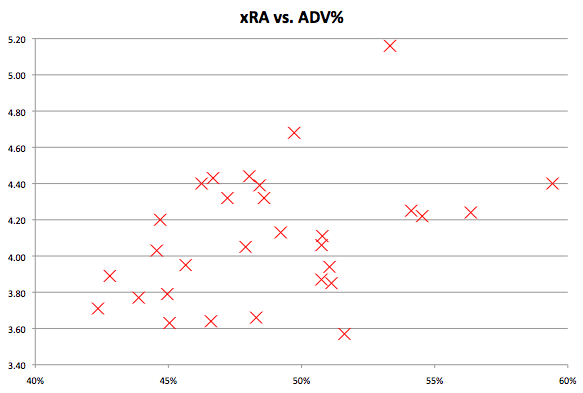 A note: there are some problems with this methodology, though I don't think I flatter myself when I declare it more exact than what Eno was using. The playing time allocations for traded players are more "best guess" than "precise", and a few relievers who picked up spot starts may have seen their relief batters faced unfairly deleted. There's also the sample size problem. Thirty data points is not a whole lot. But I decided after seeing this graph that, were I to proceed further, the odds of a correlation suddenly appearing were lower than the odds of me wasting another six hours manually identifying the handedness of AAA lifers. If you, reader, know where I can find a database that lists attributes like handedness in a spreadsheet alongside stats like wOBA, I will love you forever. If not, we can still be friends.

Back to the results! Well... this looks an awful lot like no correlation to me. The teams that had the platoon advantage the most often (that's the Giants way out on the right, followed from right to left by the Dodgers, Mariners, White Sox, Cubs, and Rays) were generally middle-of-the-pack performers. A best fit line of the xRA graph produces a slightly increasing slope; a best fit of the xFIP graph produces a slightly decreasing slope. Bullpens that rely on specialists don't appear to be obviously better or worse. 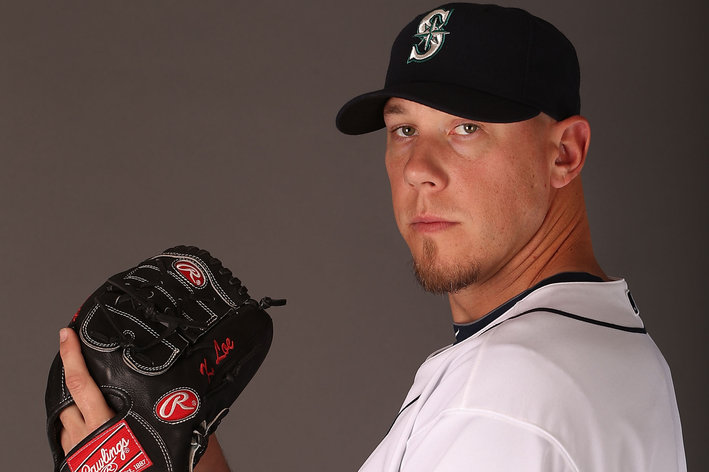 Can giant human Kameron Loe bounce back from a rough 2012 to be a positive contributor to the Mariners bullpen this season? - by Scott Weber

There's meaning in the words "no correlation", though. "No correlation" means that teams that go specialist-heavy could end up with bullpens like the Cubs' terrible one or the Rays' great one, but they'll probably just be right around average. The thing is, relievers who can be average or better with the platoon advantage are a lot more common than relievers who can be average or better regardless of the platoon advantage. Because the Loe/Luetge types are more common than the Kelley/Wilhelmsen types, they're also cheaper. So while specialist-heavy bullpens may not be inherently better, they don't have to be: as long as they're inherently cheaper and just about equally good, they will be a superior option for teams with limited financial resources. "No correlation" is a result after all. This study endorses the Mariners' approach to bullpen-building.

That doesn't mean it was wise for the front office to dump Kelley, who I'd bet on having a nice season this year in New York. Good relievers are good relievers, and if you've got them for cheap there's no reason to ditch them. But if I were building a team from scratch, I'd start looking for cheap LOOGYs and ROOGYs to populate the bullpen. Tampa Bay is already kind of doing this, and I wouldn't be surprised if the SABR-savvy Astros soon follow suit.

So this year's Seattle bullpen could be great, or it could be awful. Its success or failure will largely hinge on one man: Eric Wedge. His usage patterns could make or break the whole thing. Last year he did OK, though he deployed Luetge against too many RHBs and never really figured out the effect Delabar's Offspeed Thing was having on opposing lefties. That's the big issue with building a specialist relief corps: you have to trust your manager to use it properly.

So if the question is "will the Mariners' 2013 bullpen be good", here's my answer: I dunno.

How much do you trust Eric Wedge?