A Survival Guide to the 2013 Mariners

Have you and your family created an emergency plan in case of fire or the 2013 Mariners? The following is presented to assist you with exactly one of these concerns.

Share All sharing options for: A Survival Guide to the 2013 Mariners

One of the basic tenets of my baseball philosophy, carefully honed over a number of years, is this: baseball is kind of dumb. I should include that I do not say this as a pejorative. After all, there is a value in dumb things. They create shared experience, and distract us from the brutality of everyday life. But to take seriously the competition of young men in oversized clothing chasing a ball around in the grass is, from an objective point of view, madness.

It's with this in mind, then, that I ask you to consider the 2013 Seattle Mariners. Further, I caution you (and believe you me, dear reader, I do so with the utmost trepidation) to consider the possibility that said Mariners may not be a championship team.

This seems an innocent enough statement now, in late March, when we still find the continued existence of Jason Bay a fact worthy of discussion and when Blake Beaven starts aren't inflicted upon us with crushing regularity. But as metaphorical spring begins its annual lurch toward metaphorical autumn, we should make our preparations, steel our will for some of the long evenings ahead, nights where Francisco Martinez rolls over the kind of easy ground balls to third that Martinez himself would have trouble fielding. We need to prepare to be Mariners fans.

This is not just about the success of the team. After all, being a fan of a team is a fairly silly and arbitrary form of affection, a celebration of twenty-five men unaware of our existence, ostensibly housed in a particular city despite most of them living elsewhere. But deep in our hearts, beneath the snark and the skepticism, we want to believe that our baseball team makes us part of something beyond ourselves. We want to join in the narrative.

And there's nothing wrong with this, explicitly. Except that the narrative of the 2013 Mariners will probably fail us, and we'll never exactly know what it means to be "true to the blue". What is the blue? Is it some sort of ethical code? A social contract? What are our obligations toward said blue? What do we receive in exchange?

Without knowing these things, it's easy to become lost. And as the losses mount, and the baseball gods turn their backs on us, we must turn elsewhere for succor.

Some of us will turn to the players, cast our eyes for the glitter among the rubble. Perhaps it's a favorite player toiling in relative anonymity, the joy of watching awkward shortstop Michael Morse return as awkward outfielder Michael Morse. Or maybe it's the irrational, puppy-ownership love that one can't help but feel for an Hiram Bocachica. No matter how bad a baseball team is, it can never rob us of our hero worship; the individual always has his chance to succeed, despite his surroundings. 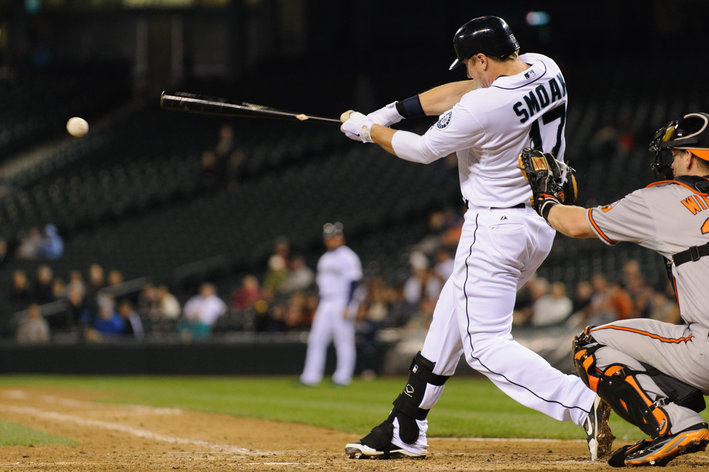 Spring training seems to have this innate ability to induce amnesia. - by Michael Barr

Some others will turn to the youth and the promises they don't explicitly make. There's a sort of organic, parental undertone to this kind of fandom, a pleasure in seeing potential realized, of hope and renewal.

Prospects are also a sort of a puzzle to be solved: there are those who see this bundle of arms and legs, and seek to extract the virtues from them, via centrifuge, to decipher the code of hidden talent. These are brave souls; the minors are a place I fear to tread, chilled as I am by the torn labrums of yesteryear.

Then there are those that find solace in the numbers, devote themselves to scholasticism and become students of the game. I believe that this, more than truth, demonstrates the success of the statistic in baseball. Even the most unfettered of optimists will eventually crack under the sheer randomness of the game, the stretches of failure and humility. When this happens to us in our own lives, we feel a desperate need to know why - and so it is in baseball. There's a deep need to understand why we suffer, to provide consolation.

There's no right or wrong way to be a fan. In fact, many of us are many fans at once. We contain multitudes. There will be times when we need each of these, and some times when they all fail simultaneously. That's when we're forced to turn to the final kind of fandom, fandom through irony. When the romance of the baseball season withers and our idealism becomes obscured, we have no choice but to band together and mock the world we cannot control. There are things in baseball that are beyond us, that we cannot change, but that we must accept. We must laugh. We must remember that Raul Ibanez takes pride in his defense.

We are all different fans, but we do not have to be all things at all times. We can depend on each other, find comfort in each other's strengths. We will need them again someday, to be sure.