Despite his having been bad for three years, the Mariners are considering betting on a Jason Bay rebound. Based on the age arcs of players with similar skills, this seems like it might not be a good idea. Surprise!

Share All sharing options for: Finding Precedent for a Jason Bay Rebound

Jason Bay is 34, and in 2012 he was terrible. In 2011 and 2010 he was mediocre. This year he is fighting for a job with a rather valuable fourth outfielder named Casper Wells. If you're confused, don't feel bad, because I am too.

Bay just seems like a bad bet. Early last year, Eno Sarris of Fangraphs put up an excellent article about how exactly the ex-slugger's career went down the tubes. The short version is that his power is fading; he's hitting more ground balls and what fly balls he does hit aren't traveling as far as they used to. He's also becoming an increasingly pull-heavy hitter, which may be due to decreasing bat speed. (Remember, as Smoak and Saunders have taught us, a slower bat means less power to the opposite field.) He's been injured, too. To top it off, his walks have been dropping for a while, which may be thanks to his adoption of a more aggressive approach upon arrival in New York. It doesn't look good on any front, really. I'm willing to forgive Bay his pathetic 2012, mostly because of his .185 BABIP, but even in 2010 and 2011 he was only a league average hitter. A league average hitter who plays bad defense in a corner is hardly what one looks for in a backup outfielder.

So my instinctive reaction to the idea of replacing Casper Wells with Jason Bay is "yeesh", and I imagine yours is similar. Still, the Mariners appear to be seriously considering betting on Bay, and given the second rule of blogging, maybe this means we should take a few minutes to reevaluate our gut feelings. What are the chances of a Jason Bay rebound?

The answer is vague and indefinite, because even the best statisticians can't predict the future and because I am not one of the best statisticians. Still, we can get a general idea of Bay's probable future by looking at the age-arcs of some comparable hitters. The way we do this is by looking at other players with peripheral statistics similar to Bay's. (Hat tip to Dave Cameron of USS Mariner for inspiring the methodology.)

Now, since we're trying to see how Bay is going to age, we don't want to include his already-elderly years (2010-2012) in our calculations. Instead, let's look at the statistics he posted in his younger, more fruitful days. Bay was a hitter with a lot of power, below average contact skills and average to above average plate patience. That means that we want to find comparable players who put up a season of at least 250 PA with an ISO between .230 and .270, a contact rate below 80% but above 70%, and a swing rate between 40% and 50%. We're also searching for players who are older than Bay, because we need to look at their mid-30s seasons.

Since 2002, there have been 23 seasons that fit all five of those criteria. A few players (Carlos Pena, Andruw Jones, J.D. Drew, and Bay himself) show up twice, so really we're looking at a sample of eighteen guys. 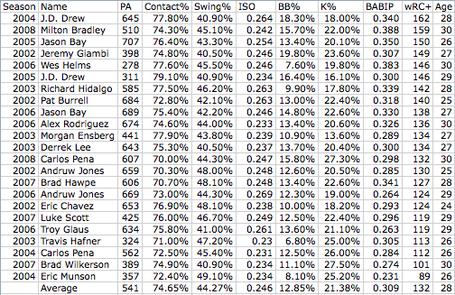 The first thing that you should notice is that these are all very good hitters. In fact, they put up an average 132 wRC+, with Eric Munson (who suffered from a .231 BABIP) being the only below average hitter of the group. This makes sense; after all, Bay was a very good hitter in his heyday. Players with power as noteworthy as his tend to do quite well, especially when their other peripherals are decent to good.

But again, we're trying to predict how Bay will play, not analyze how he did play. Let's look at how his comparable players aged. First off, the age 34 seasons, since Bay is 34 right now:

That's not very encouraging. Half of our eighteen "comparable players" were out of baseball entirely by age 34. Even the guys who made this list had trouble staying healthy, and most of them failed to reach the 500 PA threshold. Out of all of Bay's comparable players, only A-Rod put up a wRC+ over 110 in more than 500 PA in his age 34 season. Only A-Rod, Jones, and Scott managed an ISO over .200.

Well, maybe they all just got injured at age 34. Let's move a year forwards and look at their age 35 seasons.

Nope, wasn't a fluke. Only six of our original eighteen made it to age thirty-five at all, and none of them managed to crack 500 PA. Three of them were below average hitters, to boot. Only Travis Hafner and Andruw Jones managed to maintain ISOs over .200. Scott and Pena could still pull it off, since they're 35 this year, but the way their careers have been trending of late I wouldn't hold out hope.

Maybe they improved at age 36?

This doesn't bode well. Only half of Bay's Buddies made it to 34 at all, and only a third were still above average hitters at that age. They dropped off further at age 35, and by 36 there was only one left. Most of them declined exactly the same way Bay did: they started to get hurt, their walk rates dropped, and their ISOs went through the floor. If the Mariners are hoping to win Bay's undying gratitude by giving him a shot to reclaim his old glory, they may find themselves unsatisfied with what he gives them in return.

OK, OK, so the news is bad on that front. Can we salvage anything encouraging? Surely there must be some precedent for a player with a history of being a great hitter having a down year at age 32, then rebounding to his previous heights by reclaiming his ISO sometime between 33 and 35. Right?

This one may require us to go a little bit further back, since our constraints are rather specific. We're looking for players who, in their age 32 season, produced a wRC+ between 95 and 105 in a full season's worth of plate appearances. There have been 48 such players in the last 30 years, but not all of them rebounded in their age 33-35 seasons, and not all of them were good hitters before age 32. Even among those who managed to post a 110 wRC+ or higher after the one down year, not all of the good seasons were due to an ISO recovery. Many rebounds came down to BABIP and plate discipline. We're not looking for Bay to fix his BABIP or his plate discipline, we're looking for him to cut to the root of the problem and revive his flagging power.

is still not particularly encouraging. Five guys, in the last 30 years. Konerko has much more power than Bay, who probably also can't reach Paulie's 80% contact rate. Bay isn't likely to start walking as much as Gary Matthews did, either. He K's way too much to be Parker, and Clark's rebound was inflated by both a high BABIP and a low (for Bay) K%.

The only one of these guys that you could reasonably compare Bay to is Tim Salmon, the other famous Angel fish. Salmon did rebound nicely after a down year at age 32 and went on to play two more full, productive seasons, but even his glory days were over by age 35.

So what have we learned? That the odds of Jason Bay recovering, based on the history of comparable hitters, are slim. In the last thirty years, only one player similar to Bay has recovered from a down season, reclaimed lost ISO, and rediscovered success. In the last decade, only six players with core skills similar to Bay's have had successful offensive seasons at age 34, and most of them were either fragile or platooned. If it looked like a bad idea to bet on Bay before, it looks even worse now.

Wait a minute, though. Before you dismiss Bay out of hand, consider: he, unlike Wells, has a history of demonstrated platoon splits. He has a career 133 wRC+ mark against southpaws, and even in a down 2011 he pounded left-handed pitching for a 157 wRC+. Casper Wells could probably be counted on for a ~100 wRC+ vs. pitchers of any handedness, with good defense, but a fourth-outfielder platoon of Ibanez and Bay might be able to pull off a 120 wRC+ from each side of the plate. Maybe the Mariners want to platoon him and are willing to punt defense to do so. They don't necessarily have to be betting on Bay to be a starter again.

Perhaps I should say instead: I hope they're not betting on Bay to be a starter again. Because, from what I can see, that would be a pretty terrible bet.