Justin Smoak and the Opposite Field

Turns out Justin Smoak has problems hitting the other way for power. Until this spring, that is. Where have I heard this one before?

Share All sharing options for: Justin Smoak and the Opposite Field

This is the beginning of a new semi-regular series entitled No Nonsense, in which I discuss something interesting and little-known about the Mariners... using as few words as possible. Lots of pictures, lots of numbers, lots of GIFs. 150 words. (Darn you, SBN minimums!) Stats, unless otherwise noted, are from FanGraphs. Here we go! 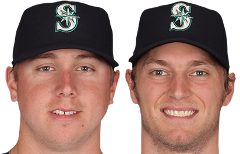 Lefty Smoak and Saunders have something in common besides not knowing how to smile.

Or, in picture form:

Justin Smoak (per Baker) has spent the offseason fixing his too-long swing with an outside instructor.

Last year (per Brewer), Michael Saunders spent the offseason fixing his too-long swing with an outside instructor.

So Saunders did this:

and then he became a good hitter.

So Smoak did this:

...can history repeat itself?