Justin Smoak has a 1.164 OPS in spring training and you really shouldn't give a rats ass about it.

Share All sharing options for: Spring Training and Known Knowns

Hey, I'm Michael. I write over at Fangraphs, I wrote a horribly embarrassing book about a period of my life, and I'm an annually recovering Mariner fan. I'll do my best to not let you down. Thanks for having me.

The 2012 season ended on October 3 for the Seattle Mariners and despite the fact that they bludgeoned the division rival Angels 12-0, the win gave them a grand total of 75 for the season and the taste left in our collective mouths was akin to licking Jay Buhner's batting helmet.

The Mariners set the standard for ineptitude on offense in 2011 with a wOBA of .283, good for last in all of baseball. It couldn't happen again, I thought. We have to be due for some regression, I reasoned. And it didn't happen again. In 2012 they were last in the league in wOBA, but hey, it was .291.

The off season was long and didn't bring much in the way of solutions. They brought in Kendrys Morales and Kelly Shoppach. They recycled Mike Morse and Raul Ibanez, except they are inexplicably older and slower. They signed Jason Bay. Optimism wasn't particularly high.

And then came spring.

Spring training seems to have this innate ability to induce amnesia. Exhibition games started and suddenly these retreads, these players that we should all know plenty about -- they started to hit.

Even this guy was hitting:

Across the board, the Mariners suddenly look like the 1970 Big Red Machine. Only blue:

The emotional homer in me thinks, yes, Brendan Ryan can hit .375. Kendrys Morales can hit 40 home runs. Jason Bay has a pulse. And then the rational side takes over and I seek out context. Harkening back to spring trainings past provides a sobering reminder of the importance of performance in the Arizona desert.

The 2010 Mariners were coming off a rather Cinderella 85 win season and spring seemed to suggest they were poised for more. Mike Sweeney was hitting .500 over 40 at bats with six doubles, two home runs, and even a triple on those old sticks of his. Milton Bradley came to Seattle to revive his career and was hitting .333 with four doubles, showing great plate discipline, and a stand-up attitude! Casey Kotchman, Matt Tuiasosopo, Jack Wilson (!) -- all hitting over .300.

The result? One hundred and one losses. Darren Brown was the manager by August.

2011 would be different though. Chone Figgins was clearly a man hell-bent on proving his worth, hitting .373/.448/.490, tearing up the base paths with five stolen bases and he even added a home run! Ryan Langerhans was hitting .318, slugging .500 with five doubles, two triples, and two home runs. Who needs Mike Morse? Even Jack Cust got in on the action, launching four home runs and driving in 14 runs in just 21 games.

It was only a year ago, but you remember Munenori Kawasaki, of course. That cute little spark-plug of a backup shortstop that hit .192 in 104 at bats, slugging a staggeringly low .202? He hit .455/.489/.523 last spring and there was more than one mention of signing him to an extra year before he got away. Carlos Peguero hit .294/.345/.588 in the spring, leading the team in home runs with five. I probably don't have to remind you that he hit .179 in limited action for Seattle last season. Justin Smoak hit .378. Alex Liddi .370.

Regarding the significance of spring training stats, I could probably just begin and end with the career spring stats of Yuniesky Betancourt, who owns a .322/.355/.512 slash line over 447 at bats. Gold, Jerry. Gold!

So why am I torturing myself in doing this? Because I'm a Mariner fan, that's why. It's the same reason my Mom warned me when I fired off letters in my youth to Bruce Bochte, Julio Cruz, Dan Meyer, and Tom Paciorek, begging for advice on how to become a major league hitter. Don't get your hopes up because then you won't get let down.

So we can enjoy the highlight reel home runs for the time being, but let's assess what we know.

Jason Bay hasn't been a productive hitter since 2009. The moving-closer-to-home and change-of-scenery narratives are good for selling papers (wait, do papers still exist?) but the fact is, relying on Jason Bay to be a productive regular in 2013 isn't a good idea. Because it's Eric Wedge and because the Mariners brass seems to have embraced the tried and not-so-true veteran presence thing, Bay looks like he's going to make this team. And it's possible that he could provide value against left handed pitchers, as he did even in 2010 and 2011. But then again, he could also go the way of Jack Cust. It's just the waiting that will be so painful.

Mike Morse is a large human. He has an enviable head of hair. He's also 31 and has dealt with moderate-to-serious problems with his shoulder, knees, elbow, and wrist in just the last two seasons. Since 2010, he's averaged just 115 games and he's had exactly one season above a 1 WAR total. There's little question that he can hit the ball a long ways, and I'm certainly hopeful that he does it many times in his second tour with the Mariners. But we have to expect he will miss time, and if this team actually parts ways with Casper Wells, our alternatives will be to put Bay and/or Ibanez out there, which... (shudders).

Speaking of Ibanez, it's expected that we'll see him at DH occasional against right handed pitchers. Ibanez hit 19 home runs last season, all of them off right handers, managing a respectable .248/.319/.492 slash line against them. He hit 16 home runs in 2010 and 20 in 2011, so he's not ready for the cart just yet. But recall that his last four seasons were played with home parks that were hitter friendly at a minimum. In fact, for left handed batters, Yankee stadium played 32% above league average for home runs by a left handed batter. Philly was 14%. Safeco was 4% below league average, and last time I checked the changes in dimensions didn't have much to do with right field.

Kendrys Morales and Justin Smoak are two that I'm actually willing to allow myself to get emotionally damaged by. We may not have seen a healthy Morales since his breakout 2009 season when he hit .306 with 34 home runs and 108 RBI. He managed 522 plate appearances last year, but he was still complaining about lower leg issues as the season started, which was no doubt related to his fractured tibia. As the 2012 season wore on, Morales seemed to only get stronger: 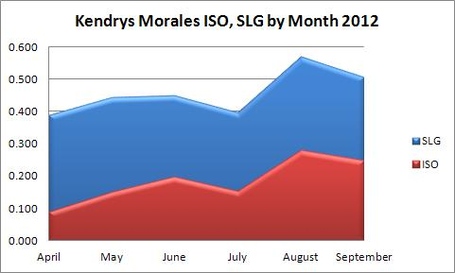 While we probably won't see a repeat of his 2009 season, I think Morales wasn't really feeling himself until about August of last season. It might be irrational exuberance, but I'm actually excited to see what he can do this year.

As for Smoak, he just turned 26, he had that fantastic finish to the 2012 season...and... wait for it... he's been tearing the cover off the ball this spring! It's clearly a make or break season for Smoak, and if's break, I imagine we'll see a new first baseman by July. For some reason, I'm just optimistic. Don't hurt me, Justin.

So eschew the spring training statistics, stay rational, and if you can't contain your optimism, just have a bottle and a hanky nearby. Because this is Mariner baseball.