Knock Knock. Who's There? A Mariners Victory

Share All sharing options for: Knock Knock. Who's There? A Mariners Victory

So you can imagine the marbles the Dodgers must've invested in. You can imagine how ornate, how opulent they must've wanted their marbles to be, just so that their marbles would be better than anyone else's marbles. There would be marbles, and then there would be Dodgers marbles, different and distinguished. A shame, really, that the Dodgers' marbles are now the Mariners' marbles. A shame, that is, for the Dodgers. It's great for the Mariners, even if the conquering process is starting to get a little stale.

(If you're wondering, I have no idea how the marble exchange process works. I'm winging it completely since I didn't plan for this beforehand. When are marbles lost? When are marbles gained? How many marbles are lost or gained at a time? There's no logical, consistent thread, as far as I can tell. I just know that the Mariners win marbles, and I'll make it fit however the hell I want it to fit on each particular day.)

Saturday afternoon, the Dodgers tried to make themselves a worthwhile opponent for the Mariners. The Mariners dismissed them by a 9-5 final, and it was 9-3 come the top of the ninth. At one point the Dodgers actually held a three-run lead, which was adorable of them, like when a kitten jumps up and occupies your favorite spot on the sofa. Haha, the kitten is in my spot! I'm going to take a picture of the kitten and share it on Facebook! Then I'm going to sit down and the kitten is going to move the fuck away because it doesn't want to get sat on. The Mariners ultimately sat in their spot. The Dodgers went somewhere else.

Truth be told, I didn't intend to write anything about this game, because it's the weekend, and I'm not actually going to write much. But I felt compelled to acknowledge that the Mariners won for the eighth game in a row, because god damn, this probably isn't going to happen during the regular season, so we might as well celebrate it now. You celebrate what wins there are, whenever they take place. So the Mariners might not finish first in the meaningful standings. They have a chance of finishing first in some standings. And these standings aren't completely, entirely, 100% devoid of meaning. They are not literally meaningless.

I get a kick out of the people who feel like they have to remind me that it's spring training and it doesn't matter. Thanks you guys. I never looked at it that way before. I know it doesn't actually matter that the Mariners are 8-1 and clubbing the crap out of the ball. The Astros are 5-2. The Royals are 8-0. The Reds are 2-8, the Rangers are 2-6, and the Angels are 1-6. Lighten up and have some fun. Now is the time to gloat, to be obnoxious, because it's all tongue in cheek, and Mariners fans never get to go around gloating. Boast, be overconfident, be stupid. It'll be back to baseball as we know it soon enough. This is the time of year that the Mariners aren't the Mariners.

Because I want to wrap this up within a few minutes, we'll just do the lightning round from here on out. Hisashi Iwakuma started and was fine, and then Jeremy Bonderman pitched and was worse, which would be a standard course of events since Bonderman is worse than Iwakuma at pitching. Iwakuma gave up one run, Bonderman gave up two runs, and then Chance Ruffin gave up two more runs in the ninth because Ruffin desperately wants all of us to forget that he even ever existed. He knows how the Doug Fister trade looks and he doesn't want to have been a part of it. At least he has a goal.

At one point Mariners prospect John Hicks hit a double and reached third on an error, and I think this screenshot adequately conveys how the Dodgers felt about their opposition: 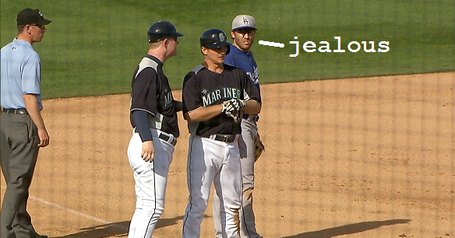 Here we can see a scoring Carlos Triunfel not pay attention to a having-already-scored Robert Andino:

Not only does Triunfel score standing up, instead of sliding like Andino told him to -- Triunfel then leaves Andino hanging and turns to go to the dugout. We've remarked about how easy it is to forget that Robert Andino plays for the Mariners. Apparently it's so easy to forget that Andino is a Mariner that you don't even realize he's there when he's looking you in the face. Robert Andino is figuratively invisible, and possibly literally invisible.

Gutierrez pulled a line-drive homer, and he also pulled a line-drive double to the left-center gap. This is where I'll remind you, again, that in 2009 Gutierrez was good for 6.3 WAR, according to FanGraphs. Since then he's been felled not by a lack of talent, but by a lack of good fortune and quality bowels. So that figure was probably inflated by an ambitious, over-eager defensive rating. The point is that, the last time Gutierrez was healthy for a while, he was a star. Gutierrez, today, is healthy, and so easy to get excited about. He isn't fragile in the way that, say, Rich Harden is fragile. Gutierrez doesn't have something chronic going on, really. It's just a matter of him not accidentally stepping on a land mine when he goes out to get the morning paper. It feels good to believe.

I don't know why I'm still writing. Mike Zunino homered because Mike Zunino is a Mariner and all of the Mariners hit homers now. It's kind of their "thing". Kameron Loe was effective again, and Oliver Perez drilled Andre Ethier with a pitch in the elbow, generating a noise clearly audible in the press box. There were rumors some weeks back that the Mariners might be trying to trade for Andre Ethier, but I'd rather they just drill him in the body with pitches. That way, the Mariners aren't burdened with Andre Ethier, and Andre Ethier hurts. I don't have anything against Andre Ethier, personally, but I don't really like when other people are happier than me. So the Mariners can go ahead and drill Ethier a lot, just in case.

Brandon League pitched one inning and allowed three runs, and Dallas McPherson went 0-for-2 with two strikeouts, three runners left on base, and an error. Tomorrow the Mariners play somebody at 12:05pm Pacific and it'll be fun for them to win again. I could get used to this. Which is an empty thing to say, because humans can get used to anything. We're kind of astoundingly adaptable.