Sometimes we remember prospects as having been better than they were. Delmon Young, for example, posted a .795 OPS in triple-A. Clint Nageotte didn't miss that many bats in triple-A. Gil Meche's career ERA in the minors was over 4. But then there are those who really should've been something, those who we don't overrate at all. In Ryan Anderson's age-20 season, with Tacoma, he struck out 146 batters in 104 innings. He could've blossomed into one of the greatest pitchers in baseball. When Chris Snelling played much of a season with Tacoma at 23, he put up a four-digit OPS, with nearly as many walks as strikeouts. He could've blossomed into one of the greatest hitters in baseball.

I don't think I need to review the history. In order to be a good professional baseball player for a long time, you need incredible talent and incredible durability. Most players fall short of the former. Snelling, like Nick Johnson, fell short of the latter. No one ever questioned Snelling's ability, and he drew early comparisons to Edgar Martinez, which is about as flattering as it gets. Maybe Snelling could've turned into Edgar, down the road, but the fact of the matter is that there are probably a lot of Mariners fans who don't remember him, or who just never knew him. Given that Snelling's still just 31, that says just about enough. Snelling could've been great, but he wasn't and isn't, for reasons in large part (but not necessarily entirely) out of his control.

The last time Snelling played affiliated baseball was 2009. There were plenty of rumors about what he did after that, after he played a little bit down in Mexico. Incidentally, here's Snelling going deep against Oliver Perez in the 2009 World Baseball Classic:

Such a quick bat, such sneaky power. Even damaged, Snelling almost had it all. But he didn't play professionally in 2010, and he didn't play professionally in 2011. Toward the very end of 2012, he signed on with the Sydney Blue Sox in Australia. Snelling, as you'll recall, is sort of Australian, and I guess he had an itch. This season in the Australian Baseball League, the average OPS was right around .715, with twice as many strikeouts as walks. After not playing for about three years, Snelling hit .273/.492/.398, with 32 walks and 12 strikeouts. The next-best OBP in the league was .423. Snelling didn't just succeed against Australian pitching; he made a mockery of it.

To post those numbers after taking so much time off -- it lends credence to the expression that Snelling could fall out of bed and get on base. Here's a baseball card: 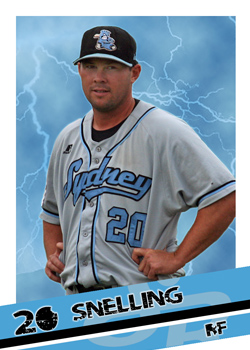 Snelling was added to Team Australia for the 2013 WBC, alongside Ryan Rowland-Smith. Australia just opened the WBC late last night, and here's a picture of Snelling during his first plate appearance. He drew into the starting lineup, being a hell of an offensive threat and all, and in Snelling's first go, against Chien-Ming Wang, he drilled a line-drive single. He subsequently left the playing field and went to the clubhouse, having sustained an injury to his leg.