Share All sharing options for: Mariners Beat Crap Out Of Idiot Rangers

On Friday afternoon in Peoria, Arizona, the Texas Rangers engaged the Seattle Mariners in battle. But the battlefield was littered with marbles, marbles scattered everywhere, and while the Mariners came equipped with crampons and stabilizing ion necklaces, the Rangers were caught flat-footed, figuratively and literally. The Rangers might've fancied themselves a worthy opponent, but they hadn't yet met an adversary such as the one they met on Friday. The Rangers now have a better understanding of what they are, and of what they are not.

Look, there's something to be said for courage. Progress is made via the taking of chances, the acceptance of risks, and you can't avoid downsides forever if you truly want to live. That's why we're here, after all -- to live, and not simply to exist. Eat that appetizer. Approach that ledge. Talk to that stranger. Travel to that place. Fortune might not always favor the bold, but it favors the bold more than it favors the cowardly. With that said, when facing any risk, it's imperative that there be some possibility of success. Some possibility of a positive outcome, such that the risk is ultimately worth taking. The only time this doesn't apply is when one is faced with a no-win scenario, in which case the decision is irrelevant. Otherwise, one should take risks only when it might turn out worthwhile.

So I don't know what the Rangers were thinking in trying to take on the Mariners today. The Rangers had to know they were facing certain defeat, and at least a preemptive forfeit would've allowed for rest and saved face. All they got out of today's nine innings were sunburns and emotional distress. You know what the Mariners are really fond of? Marbles. You know what the Mariners aren't going to give up, especially to a team like Texas? Their marbles. The Rangers might've been better off spending the day composing a pros and cons list of going through with the game. That way, they wouldn't have played the game, because they'd still be holed up in the clubhouse, trying to think of a pro.

The Mariners scored eight runs, clubbing four dingers in the process. The Rangers scored six runs, which is usually a lot but which isn't close to enough against this kind of offensive juggernaut. The Rangers actually got out to an early 2-0 lead against what we figured was James Paxton, as Mitch Moreland knocked a two-run homer in the top of the first. But as Moreland was rounding the bases, Rick Rizzs referred to the pitcher as "John Paxton", and though a casual listener might figure Rizzs simply slipped up, it's possible the Mariners started some guy who isn't even a professional baseball pitcher. Just some guy named John they found hanging around outside with a passion for accepting invitations. I wouldn't put it past the Mariners; at this point, they really don't respect anyone else in the Cactus League, nor should they. The alleged "competition" is contemptible. 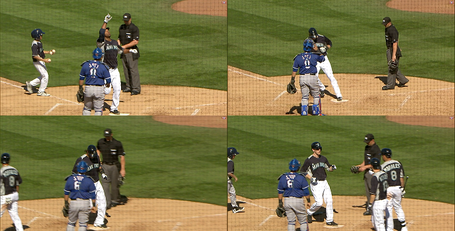 Peguero, for his part, also made two athletic plays in the outfield, that qualified as quality defensive plays for him. One was a sliding catch, while the other was a leaping catch against the left-field fence. Peguero's been as impressive as you can be by March 1 of spring training, and while we can't conclude that Peguero is a brand-new, terrific player, if Peguero were a brand-new, terrific player, this is what that would look like. We would look back on this as a sign. We've all figured that Peguero was a lost cause based on everything he's done through 2012. I just looked at the little calendar in the corner of my monitor and it turns out it's not 2012 anymore. It's 2013, and in this wild and crazy world of ours, who's to say what's up and what's down? The only thing holding Carlos Peguero back before were all of his flaws, and maybe they've been resolved at once.

Moving on to Saunders, this is where he homered, and a year ago this would've been super exciting: 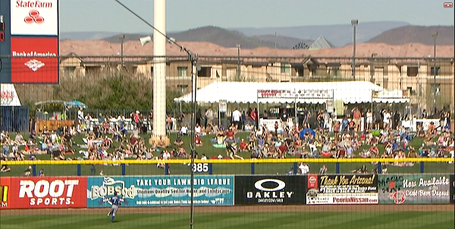 That's a home run to left field, and last spring, we made a big deal of the fact that Saunders was demonstrating an ability to go the other way, and do it with pop. Now he's proven it's something he's capable of, but at least we know he hasn't completely given those gains back. Saunders continued to work on his swing over the offseason, according to the same techniques as a year ago, and he'll be good if he sustains his production level. He'll be more than that if he manages to improve, and god knows he has the raw talent. It isn't as exciting as it was to see Saunders hit the ball hard to left, but I know I'd be concerned if I didn't see him do it for a while. This highlight was reassuring.

And then Morse clubbed a dinger because it was about god damn time. He pulled and smashed a low line drive to left, after Neal Cotts tried to throw him three straight pitches down and in, all of which Morse took for balls. When Cotts threw a fourth pitch down and in, it caught the zone, and Morse turned it around. What Neal Cotts thought: "I'm going to throw a pitch." What Neal Cotts should've thought: "I'm not going to bother throwing a pitch, because these are the Mariners. I'm just going to stand here on the mound holding the baseball until someone comes and takes it away from me and I can go."

In other stuff, Brendan Ryan made a couple great defensive plays at shortstop, because the Mariners are flawless. The Rangers played a Ryan Strausborger because if you can't have Stephen Strasburg you can at least have someone who sucks. Dustin Ackley hit balls hard up the middle, James Paxton wasn't very good over two innings, Brandon Maurer was better over two innings, and Eric Wedge continued to wear a giant bandage on his face: 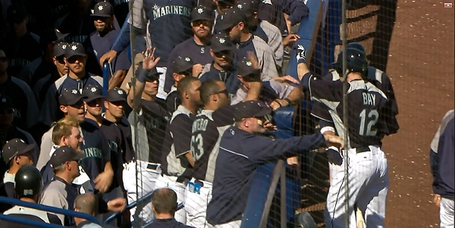 Two runs scored in the eighth against Jhonny Nunez but they were driven in by the bat of Yangervis Solarte and given that name I've no choice but to assume Gameday just started tripping balls around the sixth or the seventh. The Mariners won, is what matters. They won without using a single big-league pitcher.

The Mariners have now won seven in a row, which is the first time they've done that in spring training since 1998. And it just so happens that in 1998, the Seattle Mariners went on to be...actually not very good, turns out. They finished 76-85. But they finished first in the league in dingers! Here's to the precedent of dingers! And here's to more dingers tomorrow, when the Mariners take on those clowns from Los Angeles. Not those clowns from Los Angeles, the other ones, the blue ones. (Sad clowns.) Hisashi Iwakuma will pitch, and then Jeremy Bonderman will pitch, and then the bullpen will hold on to the lead and the whole team can go celebrate at Chuck E. Cheese's. You get a half-off group discount if you're the greatest baseball team in the whole fuckin universe.