Share All sharing options for: The Felix Hernandez Bump

Much of the conversation right now is about Felix Hernandez, and trying to measure his present and future value. This is a distinct change from the other day, when much of the conversation was about whether or not Jesus Montero purchased and/or used performance-enhancing drugs. If you've been wondering what it takes to get a steroid scandal out of the headlines, it's as simple as signing a beloved franchise icon to the richest pitcher contract in the history of baseball. Congratulations to Montero on his stay of media execution.

We have a pretty good idea of Felix's value on the field, as a player. Not precisely, but approximately, depending on your preferences for FIP or RA or park effects and so on. We can guesstimate at his future value on the field, but it's not something we can know or predict with accuracy. Then there are the arguments that Felix has value in other ways, too. Maybe he makes the Mariners a more desirable location for other players. Maybe he boosts ratings, or boosts the franchise value, or helps to preserve the fan base. It's hard to compare the effect of keeping Felix against the effect of not keeping Felix. There are entirely too many things we don't and can't know.

But there's also the old argument about how Felix puts butts in the seats, simply by being the scheduled starting pitcher. People propose this argument about every star player, even though it's something that's seldom been observed. It's also something that's reasonably easy to investigate, given all the data made available at Baseball-Reference.

I've gone through all the logs from 2005 through 2012. Over Felix's career, he's made 119 starts at Safeco Field. The Mariners have played 533 other games at Safeco Field, games not started by Felix Hernandez. I decided I wanted to look at average attendance in Felix home starts and non-Felix home starts, on a year-by-year basis. I'm aware that attendance figures are misleading -- attendance actually just measures tickets sold -- but there's nothing I can do about that and this presumably gets us close enough to the truth. 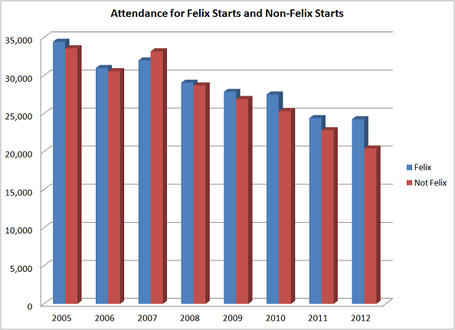 Here's another way of looking at that data: a simple ratio. We have average Felix attendance over average non-Felix attendance, expressed as a percentage. 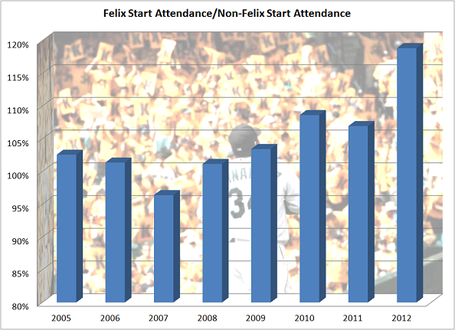 We see evidence that Felix does, in fact, help to put butts in seats. The last four years, the average Felix home start has sold about 26,000 tickets. The average non-Felix home start has sold under 24,000 tickets, so there's some extra revenue. The Mariners, of course, created the King's Court, which doesn't hurt matters, drawing fans who want to participate or fans who simply want to be around those who are participating. The Mariners have tried hard to make Felix Day an occasion, which is smart, and which has been working. Felix Days don't regularly sell out, but every little bump matters. Every little bump means money.

You can argue that the 2012 numbers are thrown off also by the Supreme Court after Felix's perfect game, which sold just under 40,000 tickets. But that's just the thing: Felix is marketable, and people wanted to be there. With another pitcher, that wouldn't have gone over so well. With another pitcher, we probably wouldn't be talking about the guy having thrown a perfect game in the first place. You can't throw out high attendance numbers that were high specifically because Felix was pitching. That's the very advantage we're talking about.